Dermie Close considers himself a student of hot rodding.

He attended an automotive trade school to become a mechanic, but the learning continues decades after his graduation. Close says he’s always looking at Street Rodder and other magazines, watching the likes of Chip Foose and others on TV, and observing the work of other builders for inspiration.

Close is quick to credit those study habits, along with his natural artistic ability and willingness to tackle new challenges in the shop, for allowing him to create this showstopping 1948 Chevrolet pickup. The immaculate truck earned a spot as a finalist in the Summit Racing Equipment Downtown Reno Show-n-Shine competition.

The project was inspired by a custom truck from the 1950s that sparked Close’s imagination. That original truck was also built around a 1948 pickup, and Close’s goal was to take cues from that truck and add a modern performance components, sensible body modifications, and tons of custom components.

Close’s custom ’48 features a cab that has been stretched six inches and then chopped to give it just the right dimensions. Close-cut material from an extra set of doors and welded it in place to give the doors additional width to work with the stretched cab. He also pie-cut and pancaked the hood to give the truck its own, unmistakable profile. Close used his considerable metal-working skills to shape the truck’s custom bumpers, employing a wood buck as a form. He also fabricated the truck’s running boards.

“Did you what see the tailgate latch is? You probably used one this morning,” Close said, referring to the toilet flush handle. “Someone told me, ‘Now you’ve got a rat rod!'”

The truck sits on an Art Morrison chassis with RideTech air suspension and Baer disc brakes to give it modern handling and stopping power. A GM LS3 crate motor with custom air intake, headers, and intake manifold covers perfectly complement the look of the truck. Close even went so far as to have a set of “Thriftmaster” custom valve covers made as a nod to Chevrolet pickup heritage. The entire truck is sprayed in a PPG metallic green paint and rolls on Chip Foose wheels.

As a student of hot rodding, Close learned the value of sponsorships as well. To help offset his costs, he and his partner, Al Unser (yes, that Al Unser) brought companies like PPG, Baer Brakes, Flaming River, Dynamat, and LizardSkin on board as sponsors.

We could talk until next Hot August Nights about all of the detail on Dermie Close’s truck, but we’ve got a plane to catch. So we urge you to scroll through the slideshow below. 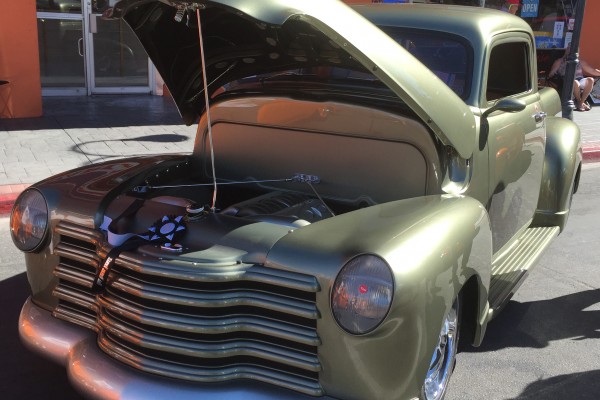 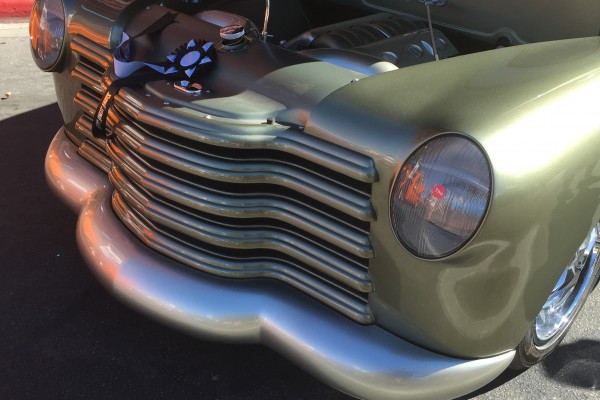