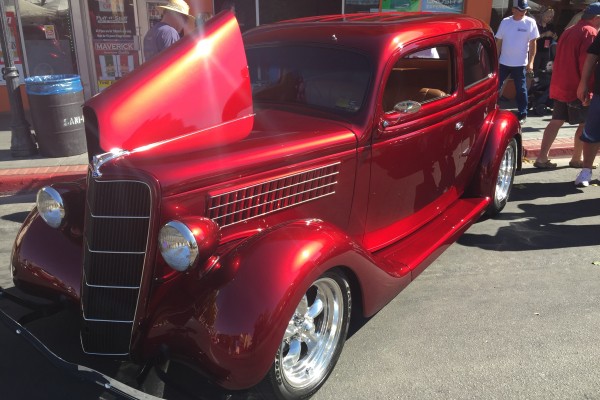 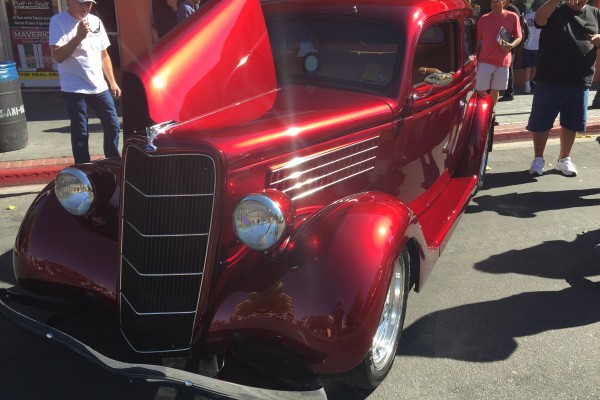 RENO, NV — Larry Soto already had a discerning eye for cool hot rods when he bought this 1935 Ford Slant Back from a friend in 2009.

“Years and years ago I used to judge cars, so I knew what I was looking for,” Soto said. “I saw this car and knew exactly what I wanted to do with it.”

What Soto saw in the ’35 Ford was an all-steel and ultra-rare body style that was largely made extinct when it was melted down for steel following World War II. There simply weren’t many others like it. When he bought the Slant Back from his friend in Chicago, Sota, a Manteca, CA resident, took it down to the frame and made a few key adjustments to make it his own. Those adjustments, along with the car’s rarity, earned the gorgeous ’35 Ford the last finalist spot in the Summit Racing Downtown Show-n-Shine competition. The car will compete against five other finalists to become Grand Champion on Saturday.

The first major adjustment that Soto made was adding a remote trunk to the car.

“I had issues with storing stuff behind the seat, so I did the trunk,” Soto said. “It used to be a spare tire in the back, but I added in the trunk and made it uniform with the body and made it remote as well.”

Soto also had to address the ’35’s fading color.

“The color that was on there was orange but all the clearcoat was gone,” Soto said. “This is a House of Kolor paint that came out in 2009. I wanted a candy, but I wasn’t sure what color. I went with a Candy Apple Red. I was looking for depth. I wanted a dark, but not too dark, so we did a copper and black base underneath with the Candy Apple Red  — with just a little touch of candy. We put three coats of clear on it.”

Soto opted for the car’s existing powerplant, a Chevy 350 small block, to deliver the horsepower. He had the engine rebuilt and added some key detailing pieces to make the engine’s appearance pop.

“I wanted give it a different look so I had the custom air cleaner done in Los Angeles,” Soto said. “It was all custom made for me. I loved the ribbed look and was fortunate to find the valve covers to match and make it all uniform.

The rebuilt engine is mated to a 350 Turbo transmission and Ford 9-inch rear-end.

It’s the ideal cruising rpm to deliver Soto from his home in Manteca, CA to Reno, NV for a shot at the Summit Racing Downtown Show-n-Shine Grand Champion award.