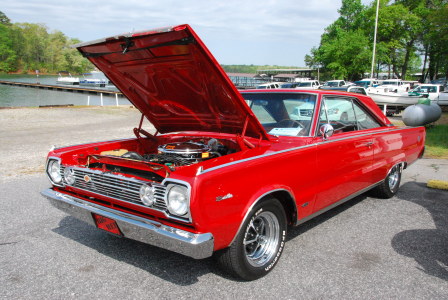 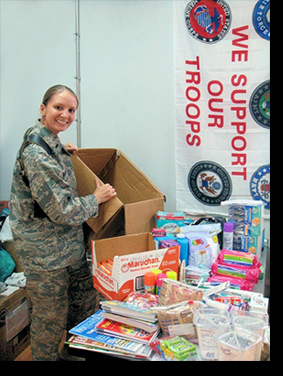 Attend one of NGMC’s cruise-ins and you may spot this ’67 Plymouth Satellite.

NGMC meetings are usually held the third Sunday of the month.

Members celebrate all things Mopar, including later models like this SRT 8 Challenger.

Dollars raised by the club support a number of local and national charities.

This ’66 Barracuda was on display at one of the group’s annual fall picnics.

Like any bona fide Chrysler buff, members of the North Georgia Mopar Club (NGMC) know the majestic thunder of a HEMI roaring under the hoods of muscle cars. But beyond the Barracudas and Belvederes that bring these friends together, the group knows the immense power of a giving heart.

Just ask Jess, one of many soldiers who has received a supercharged care package sent by the club as part of its Hero Fund charity.

“I was shocked, humbled, and truly touched at the kindness of NGMC,” wrote Jess, a lieutenant in the U.S. Air Force who was deployed with the U.S. Army in western Afghanistan years ago. “My troops were also thrilled … as I pulled item after item out of the care package. I don’t know how you knew exactly what to send, but everything was so perfect!”

Club members cram boxes (weighing up to 48 pounds) with more than 200 provisions, ranging from socks to toothpaste, granola bars to puzzle books, postcards to car magazines—non-issued items that bring a touch of home to a soldier’s stressful surroundings. Each package costs about $255 to fill and ship.

“We put in everything under the sun,” said Chris Street, club president emeritus.

Joe and Dinah Suchy have coordinated the outreach since 2008. Dinah does all the shopping while Joe handles the packing and making sure each box contains one of his handwritten letters. In return, the club has received a scrapbook full of thank you notes from grateful soldiers.

Dollars raised from NGMC events throughout the year help fund these acts of kindness. One such event is NGMC’s Hot Summer Night to Benefit Our Heroes. The ninth-annual cruise-in will roll into Summit Racing’s parking lot in McDonough, GA, on Saturday, August 6 from 4-9 pm. A donation to the Hero Fund registers you for the event, which is open to all cars, trucks, and motorcycles.

In past years, the Hot Summer Night benefit has generated between $4,000 and $6,000 to fund the care package project.

Street credits Summit Racing and the support of Reggie Triggs, Summit Racing Retail Store Supervisor in McDonough, for helping to fuel the ongoing success of the Hero Fund.

“We’ve had years where every parking space was filled at Summit Racing, all around the back of the building,” Street said.

The NGMC has been going strong since it was founded 25 years ago by some friends with an affinity for all things Chrysler. Get-togethers include monthly meetings, bench racing, spring and fall picnics, shows, and cruises. The club awards an annual scholarship to a child of a member and raises money for Toys for Tots, Victory Junction Gang, Rainbow Village, Angel Flight, and other causes.

Along with their charity work, NGMC’s 100 members showcase their passion for stock and modified Chrysler, Dodge, Plymouth, Jeep, and AMC vehicles. At any given show you’ll find them displaying Depression-era Chryslers, ’60s A-bodies, ’70 Superbirds, Prowlers and PT Cruisers, late-model Charger and Challenger Hellcats, and many more. If you’d like to join, they’re always looking for folks with hearts as big as a 426 HEMI.