Alvin Garnica has been coming to Hot August Nights almost since the show’s beginning in 1986.

The San Jose, CA resident says he has attended 29 out of the show’s 30 years and has brought a few different cars and trucks over the years. For 2016 — the 30th anniversary of Hot August Nights — Garnica opted to officially unveil his latest creation, this 1951 Chevy Fleetline.

Response has been resoundingly positive.

Garnica’s Fleetline became the first of six finalists for the Summit Racing Equipment Downtown Show-n-Shine Grand Champion, which will be awarded on Saturday. “It makes me feel good. You can see the abbreviation on the license plate: ‘bittersweet.’ So far it has all been bitter, but no sweet,” Garnica said, referring to some of the problems he encountered during the build. “Hopefully the sweet comes, and I think it’s starting to.”

Garnica purchased the ’51 for $300 about eight years ago. The car resided with his son and sat mainly idle for a few years before Garnica took back custody of the Fleetline and got to work. He had the car chopped and added a custom air bag suspension that operates off the engine. He also installed rack and pinion steering and began visiting various swap meets to add in unique elements.

The headlights? Those came from a 1956 Oldsmobile.

The final step in getting the car ready for summer was rebuilding its Chevy inline-six engine. As of Wednesday afternoon, the rebuilt inline six had just 800 miles on it. As you’d expect, the engine is decked out to complement the styling of the car. The block is painted to match the Fleetline’s eye-catching purple exterior, and Garnica re-chromed just about everything he could on the engine. The powerplant is mated to a TCI 350 Hot Rod transmission, which sends power to the skirted Chevy 15-inch wheels.

“It rides so sweet,” Garnica said. “I tell everyone it’s like a Chevrolet on a Cadillac frame!”

Take a look through the slideshow for a closer look at the inside and outside of Alvin Garnica’s 1951 Chevy Fleetline. 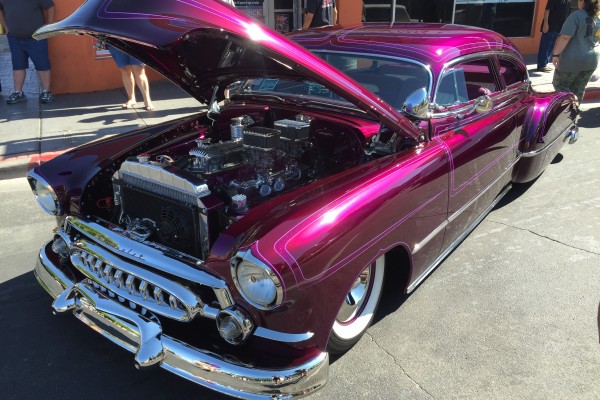 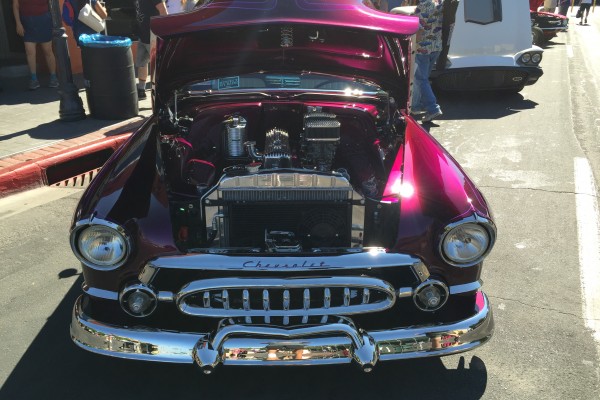