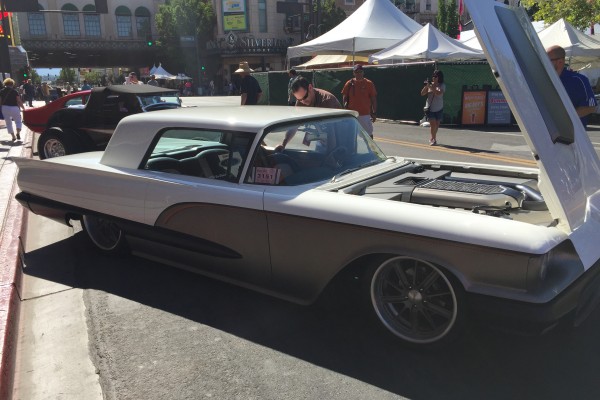 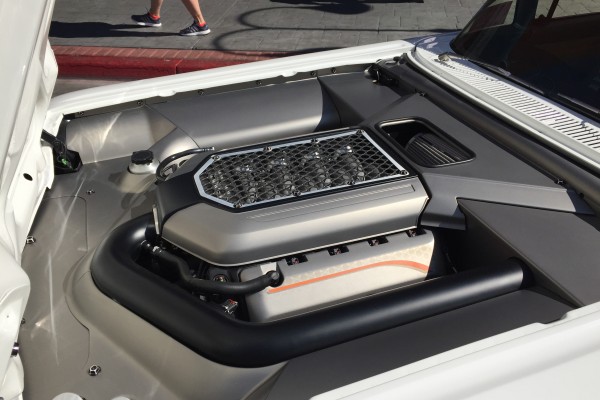 You’ll see a lot of really well done Thunderbirds around Reno, but there’s not a chance you’ll see another one like Alex Short’s ’58 Thunderbird. In fact, Short himself couldn’t envision how his Thunderbird would turn out when he took it to friend Cam Miller’s shop, HS Customs in Logan, UT.

“We were just going to do a clean, simple build,” Miller said. “And then we just started throwing ideas around, because the ‘square birds,’ especially these ones, aren’t super popular in the custom world, although they’re hot in the lowrider scene. So we thought we’d make a modern ‘square bird’ with the modern touches.”

The modern touches start with what’s under the hood. Short already had a Ford 5.oL Coyote motor lined up for the bird. The Coyote gives the Thunderbird a combination of great fuel mileage and good power — a combination that simply wasn’t possible in 1958. The engine features a custom cold air system that routes air though a one-off cowl system.

Using the Coyote engine as inspiration, Short and Miller continued to incorporate more modern upgrades. A custom made console holds an Ipad, and the stock dash features billet accents.  A Retrosound stereo system provides the tunes, an A/C system allows Short to cruise in comfort, and an Accuair suspension system delivers a smooth ride.

While the square bird boasts new age technology, tons of good old fashioned hot rodding went into its design. For example, all the handles, emblems, and mounting hardware were shaved. Overhangs were filled in, and the bumpers were tucked. Miller says they started taking styling cues from the car itself, starting with grille.

“The grilles are popular on this car — the honeycomb pattern — so we rebuilt all of the grilles on the car and then gave the same grille treatment to the intake cover,” Miller said. “Then we put the grille pattern in the paint. It all has to flow from the front to back, and on the inside and out, so you’ll see that treatment throughout the car.”

The bird’s white paint was a requirement for Short.

“We always start with white and go from there,” he said.

Short and Miller worked together on some complementing colors

“We made the complementing paint to match the platinum look of the wheels and just followed the lines of the car,” Miller said. “These cars have really cool lines. And then we thought we still need some sort of an accent color, so we picked that basketball orange.”

So what was the biggest challenge to building a Thunderbird this unique?