It’s hard to believe that the 2016 Hot Rod Power Tour was a month ago. But thanks to the Internet, it will live forever in participants’ Facebook posts, blogs, tweets, and Instagrams…and in the hearts of their iPhones.

Rutledge Wood is one of those people. He took two vehicles — a 1968 Camaro and a 2008 Toyota Tundra-turned-2016 TRD PRO Tundra — on the Tour. Rut’s pal Steve Allgood tagged along in a virtual clone of Rutledge’s Camaro. Dubbed the Evil Twin Camaros, both were driven by Tanner Foust in the movie Need for Speed.

Below are excerpts from Rutledge’s Big Power Tour Adventure in his very own words, plus some Tour pix and build photos of the Camaro and Tundra. You can read Rut’s entire tour blog, watch the videos, and browse through all his photos at www.TheRutledgeWood.com.

After a late night of wrenching, we were slow to get on the road for the start of the Hot Rod Power Tour 2016—like leaving at mid-afternoon slow. We drove straight through from home base, Kenwood Rod Shop in Sharpsburg, to Gonzales, LA, only stopping for gas and snacks. The ride was pretty uneventful except for a brake caliper on the Camaro that decided to stick. It was an easy fix, though.

We blasted out of Gonzales headed west with a bunch of other Power Tourites and a Tundra full of Continental Tire hats, koozies and other goodies that we handed out to folks who came to watch the Power Tour roll through their town.

We took the backroads as much as possible. We went through some off the radar Louisiana towns. In Jennings we ate at the Rocket Drive-Inn, a killer old-school drive-in. The Hot Rod Magazine crew rolled by while we were eating, and next thing you know, we were doing an impromptu photo shoot with the Evil Twin Camaros in front of an abandoned grain facility.

It started raining around Lake Charles and continued off and on until we hit Baytown. We were also hit with another gremlin on a buddy’s car, which had to go to Baytown on the back of a transporter. That delay meant we missed the Tour Stop at Royal Purple Raceway. Sigh.

After our troubles the previous two days, we decided to get on the road a little earlier this time to ensure we made it to the venue, the Circuit of The Americas (COTA) F1 track. We saw a sign for LaGrange and knew we had to go. You don’t visit Texas and just drive past LaGrange! (you’re welcome for the ZZ Top earworm).

Continental Tire and Petty’s Garage invited us to park one of the Evil Twin Camaros and the Tundra with their display rig at COTA. The Evil Twins were a big hit. Hot Rod Magazine even shot a piece where I walked their viewers through the builds and told the story of the cars.

At the end of the day, we witnessed a wedding right on the Hot Rod stage. They even had automotive themed vows, which were perfect.

We joined up with our friends from Odyssey Batteries, who brought along a SRT8 Jeep Grand Cherokee, and hit the road for Dallas.

Our first stop was to pick up Top Gear pal Adam Ferrara at his hotel in Austin. We then went to
Buc-ee’s, a gas station, grocery store, and Wal-Mart all rolled into one. It was glorious—I’ve never seen so much beef jerky in my life!

Today was all-interstate as we were hustling to get to No Limits, TX — home town of Texas Motor Speedway — to get everything set up for the Top Gear watch party that evening. When we got there, we did a short video with the Tundra on the track, then decided hell, might as well take a lap. The truck did great, but I think we made the stability control angry as it wouldn’t stop flashing.

That night we gathered ‘round with lots of friends and fans to watch Top Gear on Big Hoss, the world’s largest HDTV. It was a charity event to benefit the Speedway Children’s Charity. It was really special to see so many people sitting in their chairs and cars, watching and laughing right alongside us.

It was time to hop back in the car and make our way to Oklahoma City. The first thing we saw was that the Roadkill guys, Mike Finnegan and David Freiburger, had infiltrated the Tundra and put stickers everywhere — and I mean everywhere. We were finding them the entire ride!

We rolled into the venue at Remington Park around 2:30 pm and got the vehicles placed on display with the Continental Tire/Petty’s Garage rig. I was sweating like a —well, you know— signing as many autographs and taking as many pictures as I possibly could. I also managed a walk around the venue space and the parking spots. The coolest thing about the Power Tour is that between the participants and the spectators from local towns, the parking lots turn into the world’s most amazing and eclectic car show.

As much fun as we had been having, we had to hit the road to head home after the Oklahoma City stop. The GPS said it would be a 13 hour ride. We stopped for lunch at a great spot in North Little Rock, AR. After filling our bellies and weighing our options, we decided to push through and make it home. Only took 15 hours! 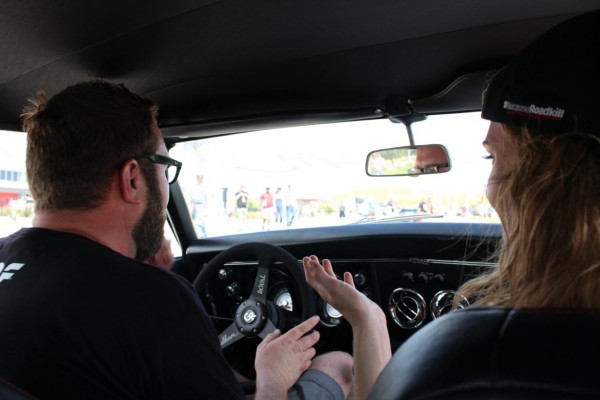 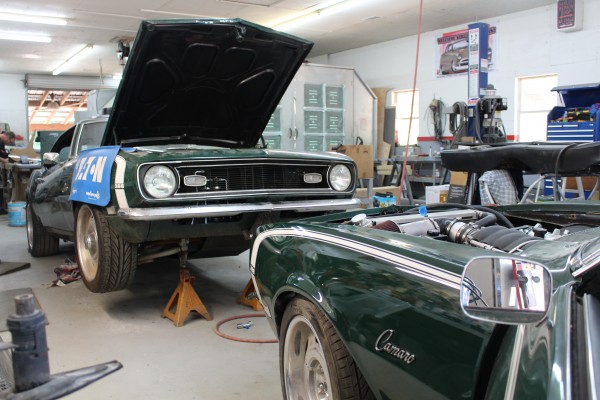 You might remember our little contest to help Rutledge choose a new rear suspension, wheels, and interior for his Camaro. You guys told Rut in no uncertain terms to go with a Heidt’s four-link over an upgraded leaf spring setup. As you can see, your wish was his command.

The Camaro’s Rallyes were eighty-sixed in favor of Forgeline’s beautiful ZX3 wheels. Rutledge ordered his ZX3s in the 18 x 10 economy size with a gunmetal center and a polished lip. Steve Allgood liked them so much, he got a set for his Camaro.

No one can resist a Camaro with houndstooth seats. TMI really stepped up to the plate and provided two Sport R Pro-Series front bucket seats and matching upholstery for the rear bench—in record time, we might add. Thanks, guys!

Steve Allgood’s Camaro came with a locking differential—great for the track and its former life as a movie stunt car, not so much for Power Touring. It was replaced with a limited slip, but retained the 3.73 gearing.

The guys at FoxyWraps temporarily lost their collective minds and let Rutledge help apply the 3M Gloss Lemon Sting vinyl wrap on the Tundra. Rut did a pretty good job, as far as he knows.

Even the letters on the TRD Pro grille were given the wrap treatment.

On the Power Tour somewhere in Louisiana—or was it Texas? Rutledge and crew drove the backroads as much as possible so they could actually meet people and see things other than orange barrels, Motel 6, and the Waffle House. This is Steve Allgood’s Evil Twin #2, with dad Randy Allgood riding shotgun.

“I’ll have one of each, please, and a Diet Coke.” One of the cool places Rutledge found was the old-school Rocket Drive-Inn in Jennings, Louisiana. Where else but there could you find a crab burger?

Rutledge “Pa” Wood waiting for his truckload of Adam Ferrera Chow. The Hot Rod Magazine crew shot photos of the Tundra and the Evil Twin Camaros at an abandoned grain elevator just outside of Jennings.

One of the pitfalls of being a celebrity is doing interviews when you’re trying to have fun. Rutledge obliged everyone who wanted to shoot some video, including this team from Chevrolet Performance.

One of the rare ventures out on the interstate as Rutledge had to hustle from Austin to Texas Motor Speedway in No Limits, Texas in time for the Top Gear viewing party.

The TRD Pro Tundra at Texas Motor Speedway. Rutledge got to take the Toyota for a lap around the track. Lap times were not provided. If you were wondering who made that cool hard tonneau, it was the fine folks at Undercover Tonneau.

Friends and fans gathered at the Speedway to watch Top Gear on Big Hoss, the world’s largest HDTV. It was a charity event to benefit the Speedway Children’s Charity. Top Gear co-hosts Adam Ferrera and Tanner Foust were there as well as Mike Finnegan and David Freiburger of Roadkill and KC Mathis (formerly of Gas Monkey Garage). It was a great turnout for a great cause.

The Camaro made it through the entire Power Tour under its own power. The only problems encountered were a stuck brake caliper (fixed roadside) and a bum starter, which was replaced at Texas Motor Speedway. That’s a damn fine record.