It’s not every day you run across a bona fide race warrior tucked away in a barn or shed, especially if that warrior is an American Motors product. But that’s what road racer Karen Salvaggio found in 2009 when she bought a tired 1969 AMX.

American Motors was very involved with Trans-Am and road racing in the late 1960s, and the AMX was the car that led the charge. Competing against bigger Mustangs, Camaros, and Cougars, the two-seat AMX was a 3,000-pound terror when equipped with the 315 horsepower 390 V8.

Robinson raced the car until the early 1970s, and it sat in storage for over 35 years until Karen purchased it. A strong advocate of involving women in the high performance and racing world, she assembled a crack team of female hot rodders to restore the AMX. Over 29 women eventually contributed to the restoration.

Dubbed the Valkyrie Project, the restoration began in December 2014 with the goal of making the 2015 Hot Rod Magazine Power Tour. The first stop was High Performance Advisors just outside of Tampa, FL for engine removal before heading to Robert’s Collision Center in nearby Clearwater for bodywork and paint.

The body was straight with no major rust (thanks, California), but JoAnn Bortles of Crazy Horse Painting and her team had plenty of work to do. Stripping the car revealed numerous quick repairs of bumps and scrapes from its racing days. Work that would normally take a month or more had to be done in 12 days. The team put in some brutal 16 and 18 hour days getting the body ready for paint—Deltron Wimbledon White basecoat and custom-mix PPG Deltron Starlight Blue Metallic stripes. This paint scheme replicates the original, but the team added some Easter eggs including ghost stars in the stripes and number roundels.

After a stop back at High Performance Advisors to strip and clean the undercarriage and run the Painless Performance wiring harness, the AMX was trailered to Automotive Specialists in Concord, NC to have the 390 rebuilt. Since Karen planned on racing the AMX, engine guru Keith Dorton and his team tore the 390 down to the block. The cylinders were bored to 4.200 inches, and the block was fitted with a 3.625 inch stroke steel crank, 6.125 inch Chevy steel rods (turned backwards to center the pistons in the bores), and Diamond flat top forged pistons. Static compression ratio is a healthy 12:1.

A .640-inch lift Crane mechanical roller camshaft turns the valvetrain in a pair of Edelbrock Performer RPM 401 aluminum cylinder heads. Up top is an Edelbrock Torker II intake manifold with a 650 cfm Holley Aluminum Ultra XP carburetor. The oiling system is all Milodon, and a MSD distributor, Digital 6AL box, and coil take care of the spark. The 390 cranked out 525 horsepower and 490 ft.-lbs. of torque on the dyno — big power for a 3,000 pound car.

While the engine was being assembled, parts were piling up at Cool Hand Customs in Middleton, WI. Owners Amy and EJ Fitzgerald graciously opened their shop to the Valkyrie team, which arrived with the AMX around Memorial Day.

The list of things to do was pretty staggering. There was an engine to button up, a cooling system, exhaust, and brakes to install, a transmission to bolt in, wiring and plumbing to run, and an interior to fit. The Valkyrie team worked around the clock during the 2 1/2 weeks the AMX was at Cool Hand, stopping once in a while to get a few minutes’ sleep in the shop. At one point, the team was up for 38 hours straight.

The AMX wouldn’t have been a proper project car without throwing up a roadblock or two. For example, most of the factory mechanical clutch linkage was missing, and an attempt to install a hydraulic throwout bearing failed due to a lack of space in the engine bay for the slave cylinder reservoir. In the 11th hour, a local gentleman named Tim came to the rescue. A diehard AMX man, Tim dug into his stash to find the missing clutch linkage. And we mean that literally — he had to dig a hole underneath a donor car to get at the parts.

Did Team Valkyrie get the AMX done in time for the Power Tour? Yes, but they had to trailer it to every stop. In St. Louis, a group called The Late Haulers pitched in to help get the AMX running under its own power so it could be driven around at the last three Tour stops.

So what’s happening with the Valkyrie AMX now? Karen competed at an event at Auto Club Speedway in California in late fall 2015, where she discovered some bugs that needed to be ironed out. She has been asked to race at NASA events this year, and plans to compete at various road races and time trials throughout the season. 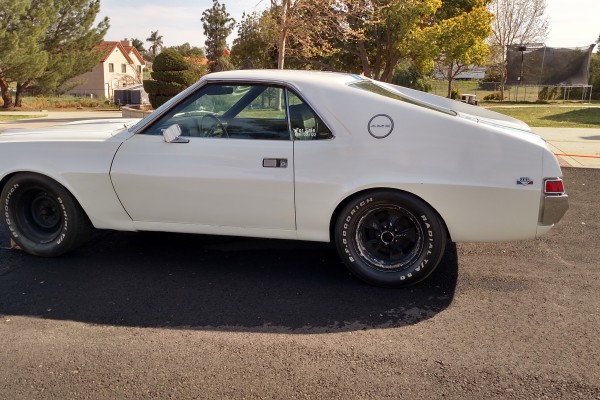 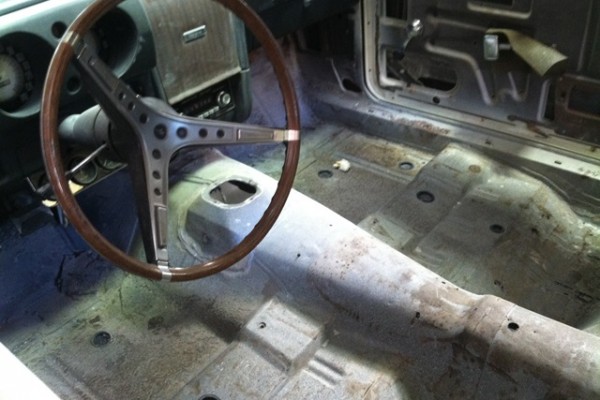 The foundation for the Valkyrie AMX is this 1969 model that was road raced in the late 1960s and early ‘70s by Southern California racer John Robinson. The 3,000 pound AMX was ordered with AMC’s famous Go Pack setup, adding a four-speed transmission with a Hurst shifter, handling package, Twin-Grip limited slip differential with 3.55 gears, power front disc brakes, and heavy-duty cooling. The car was prepped for racing by no less than legendary Corvette racer Dick Guldstand.

After stripping the interior, the Valkyrie team found the AMX was rust-free and structurally sound. This car apparently did not come with the Go Pack gauge package; it would have been installed in the center panel. You can't see it in the photo, but there’s a four-point roll bar behind the seat area, most likely welded in by John Robinson to meet racing rules.

The AMX traveled from California to Florida for the first phase of the build. Job One was to strip the car of its driveline, interior, wiring, and external bolt-ons, then hitting it with lots of degreaser in preparation for bodywork and paint. That’s JoAnn Bortles, owner of Crazy Horse Paint, hitting the engine bay with the power washer.

The AMX had some minor damage on the driver side front fender, plus various dings and dents that needed to be fixed before the arduous task of filling, sanding, and filling could begin. Clockwise from left is Jessica Gomez, Jessica Hojnacki, Amy Fitzgerald of Cool Hand Customs, and Dee Ashbury-Robertson.

The premise of Project Valkyrie is to showcase female gearheads and attract women to the hot rod industry. Jessica Gomez (right) has body and paint experience. But her partner Diane Tran is a handbag designer with little automotive experience. It turns out Tran was following the career of JoAnn Bortles. When she learned Bortles was part of the project, Tran decided to volunteer and learn the basics of body and paint.

We fast-forwarded a little to show off the custom-mix PPG Deltron Starlight Blue Metallic stripes with the cool ghost stars. Those stars show up in the number roundels too.

Tracy Crow contributed her airbrush skills to the AMX project. Here she is airbrushing the Project Valkyrie icon on one of the trunk hinges.

Once the paint was dry, the AMX went back to High Performance Advisors to rehab the chassis and install the wiring harness and AC. The Velocity Channel even stopped by to film the process for Two Girls Garage. That’s Tracy Marshall and Angel Charon pulling the passenger side front control arm off for the camera.

The AMC Model 20 rear axle wasn’t pretty, but the ring and pinion gears and Twin-Grip limited slip differential were in great shape. A good cleaning, new axle bearings, and fresh lube was all that was needed.

Missy Perez puzzles out where to stash the Vintage Air Gen IV AC unit under the dash. Air conditioning was an option on AMXs, but was not a checkbox marked when ordering a race car back then. The Valkyrie will see some street time, so climate control is a must.

Ms. Perez also got to find a home for the fuse panel from the Painless Performance wiring harness. Beats yoga, we suppose.

Karen Salvaggio installing a Ridetech HQ Series shock. The shocks have a wide rebound adjustment range so you can tune them for track conditions, then reset them for the ride home. AMC used a trunnion style independent front suspension on the AMX. Dating back to the 1930s Nash, the design has upper and lower control arms and a coil spring on an upper trunnion. The trunnion acts like a ball joint and rides on a thrust bearing atop the steering knuckle; a shaft holds the knuckle and trunnion together, much like a kingpin. The spindle, brake, and wheel all attach to the steering knuckle. It’s funky, but it works.

The AMX also got a heapin’ helping of Thermo-Tec heat and sound insulation, including the acoustic and sound control insulation Maurisa Russell is sticking to the floor pans.

The Valkyrie team enlisted the help of Keith Dorton at Automotive Specialists in Concord, NC to build the 390 V8. The 12:1 compression engine was bored and stroked to 401 cubic inches. The short block was fitted with a .640 inch lift Crane solid roller cam, Edelbrock Peformer RPM 401 aluminum cylinder heads, and a 650 cfm Holley Aluminum Ultra HP carburetor on a Torker II intake manifold. The 390 cranked out 525 horsepower and 490 ft.-lbs. of torque on the dyno.

The final phase of the build was done at Cool Hand Customs in Middleton, Wisconsin. The AMX arrived around Memorial Day, and the list of things left to do was staggering; everything from plumbing and brakes to final wiring, cooling, and interior work. Everyone worked around the clock during the 2 1/2 weeks the AMX was at Cool Hand. At one point, the team was up for 38 hours straight. That’s Cool Hand Customs co-owner Amy Fitzgerald assembling the Be Cool cooling module.

Team Valkyrie’s hard work paid off, and the AMX was ready in time to display on the 2015 Hot Rod Power Tour. The car made its unofficial debut at the Kenosha History Museum in Kenosha, Wisconsin, home base for American Motors back in the day, In fact, that’s a former AMC worker behind the wheel, reliving a bit of AMC glory. From left to right are Team Valkyrie’s Amy Fitzgerald, Susan Carpenter, Karen Salvaggio, Tracy Stolpa, and JoAnne Bortles.

This dog can hunt, too. Owner Karen Salvaggio took the AMX on its maiden track day in late 2015 at Auto Club Speedway in California. The racing revealed a few bugs, but those have been attended to and the car is ready for a season of vintage racing and time trials.

4 responses to “The Valkyrie Project: Restoring a Road Race 1969 AMX”