Vega—one of the brightest stars in the nighttime sky—is located in the constellation Lyra, trillions of miles from planet Earth.

Like that distant star, Charley Denny’s spectacular Chevrolet Vega station wagon is light years away from the compact Chevy grocery-getter that rolled off of a Lordstown, OH assembly line back in 1976.

The rebirth of this shining star took 2½ years, two donor cars, and plenty of help from Denny’s father; some pals; and his best friend, Ted Wright.

“I began racing at a young age and got pretty good at it,” Denny said. “It’s just about my favorite thing to do, so I decided to build a bracket racer for my daughter.”

With the plan in place, Denny set out to find a suitable project vehicle.

“I wanted something different. I was looking for a Malibu station wagon,” he said. In the meantime, an old drag racing had a line on a 1976 Vega wagon.

“I hadn’t considered building a Vega wagon, but I started to fall in love with the idea,” Denny said. The car could be delivered to his doorstep for $1,000, or $1,500 with a title.

“I told the guy, if it has a good body, good glass, good trim, and luggage rack, I’d take the car,” Denny said.

Apparently, Denny’s friend thought it was opposite day.

“The body was horrible, the windows were broken, and the trim was messed up. Take my advice, don’t ever buy a car in primer, sight unseen,” Denny said with a laugh. Fortunately the deal had a silver, or at least, chrome-plated lining—Denny found a pristine luggage rack sitting in the wagon’s cargo bay.

“The first thing I did was take that luggage rack out and set it on top of the car,” he said.

“The main hoop looked like an actual roll bar, but the rest of the cage and chassis rails were made from galvanized water pipe and fence posts, whatever the guy had, and the welds were just scary,” he said.

Denny and Wright dismantled the shoddy metalwork and things didn’t get much better when they started stripping the car’s exterior. They scrapped the majority of the driver’s side sheetmetal and began the search for a massive collection of vintage replacement parts.

“Except for the door seals, they don’t make parts for this car anymore,” Denny said. “You just have to find parts where you can, and then you have to make them fit.”

“We found a Vega driver-side door, but… it wasn’t a Vega wagon door. I had to cut and weld it back together to get it to fit,” Wright said. “We built the windshield surround out of parts from two different cars. What we couldn’t find, we had to make.

With the rotten metal replaced, Denny and Wright went to work prepping the Vega for paint.

“We’ve built a lot of cars, but this is the first time we decided to do all of the bodywork and paint the car ourselves,” Denny said.

After countless hours of hand sanding and blocking, they laid out a splendid Synergy Green finish over the wagon’s dead-straight exterior. To accent the sparkling emerald hue, Brandon Bowling added a matte-black stripe to the hood along with Denny’s fiery take on classic Yenko Stinger stripes on each side.

Nestled under the Vega’s hood is a Chevy mouse motor built to last.

“That engine is over 10 years old, and it’s been in 16 different cars,” Denny said. “I think it may be time to freshen it up.” The .030”-over 350 makes about 480 horsepower, and features GM camel-hump heads, a World Products Motown intake, a Holley Double-Pumper Carburetor, and even more go-fast goodies.

When the Vega rolls up to the staging line, it rolls on a set of Weld wheels wrapped with sticky Mickey Thompson rubber. But you won’t find Denny’s daughter behind the wheel.

“Turns out, she’s not really into racing,” he said. “She’s more interested in computers than cars.”

It all worked out in the end, as Denny is more than happy to pilot the Vega wagon at his local dragstrip, where they call him “Pro Stock Charley.” Always a crowd favorite, the little Vega wagon is a sure bet to turn heads and trip the win light just about every time it hits the track.

That’s what we call star power. 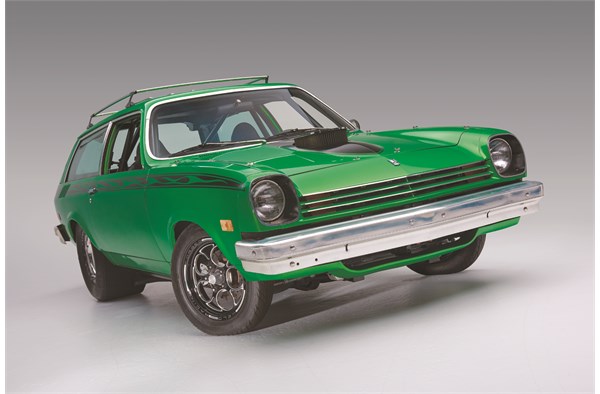 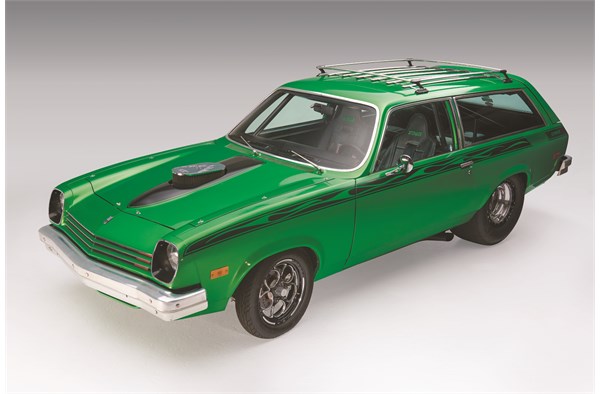