Every now and then, a vehicle build just blows you away.

You know the one. You stop and stare, mouth hanging open slightly. It leaves an imprint on you, and you might even snap a picture with your cell phone or tell a friend about it later.

You instantly want to know more. Who built it? What was his or her inspiration? How did they manage this? How much time did it take? Why isn’t that in my garage?

Brian Bichanich built such a ride. And even if you aren’t into lifted trucks, you’d be amazed at the creativity and craftsmanship that went into his 1952 Chevy.

Bichanich was always into early Chevy trucks. According to his son, Max, Bichanich started tinkering on a 1953 Chevy truck around the age of 14. That love developed into Bichanich participating in truck pulling throughout the 1980s, where he always used a 1951-53 Chevy powered by a BBC.

He still has his original 1953 Chevy, which maintains a classic look (as you can see in the image above).

But Bichanich wanted to create something unique, and he had another love – the 5.9L Cummins.

Bichanich “worked at American Motors/Chrysler as an electrician for 28 years at the engine plant here in Kenosha, WI,” Max said. “Dodge and Chrysler products have always been prevalent in his family, especially Dodge pickups outfitted with the 5.9 Cummins.

“I’d say between my father, his father, his brothers and cousins, they’ve collectively owned 10 or more over the past 20 years.”

So maybe it’s not surprising that Bichanich considered an arranged marriage between two of his all-time favorite vehicles.

“The idea of a four-door pickup just kinda came to him as an idea ‘just because,’” Max said. “He drew up some plans and, from before I was born – 1997 – until the summer of 2014, he worked on it on and off until his retirement in 2010, when Chrysler shut down the Kenosha plant. [That] was when he really got to dive in and finish it up.”

In short, Bichanich took a 5.9L Cummins engine from a 1995 Dodge 2500, put it in a 1952 Chevy, used three different cabs to build the four-door body, and placed it all on an extended frame. But anyone with a project car knows it took a lot more than that.

“The engine is out of a 1995 Dodge 2500,” Max told us. “Number 5 fuel plate, 50 horse injectors, 4,000 rpm governor springs, and the obvious dowel pin fix. The transmission is a Chevy TH400 with a shift kit, a 205 transfer case going to a Dana 60 in the front and an Eaton rear end in the back. The body is built from three different cabs all welded together, leaded, and blocked. To be honest, I think you could hold all of the bondo he used in one hand. Very, very little filler, tons of sheet metal work. The frame is an extended ’52 frame with a custom – did it himself – air ride suspension on top of that. He painted it at home in a home-built paint booth.”

While the Cummins-powered ’52 Chevy certainly draws its share of attention at car shows, Bichanich uses it for a lot more.

“It gets used and abused – that’s for sure,” Max said. “The main use is shows and taking it out to the Silver Lake Sand Dunes in Michigan.”

Bichanich’s Cummins-powered ’52 Chevy was popular enough to be voted Top December 2015 Fan Ride on Summit Racing’s Facebook page last week. Next up: It will compete to be named Summit Racing’s social media Fan Ride of the Year for 2015.

Check out some additional pictures below. 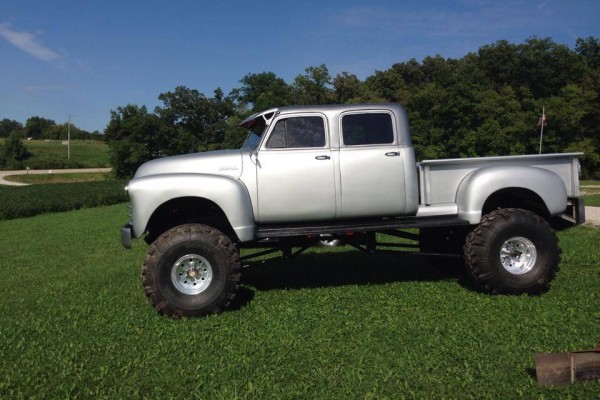 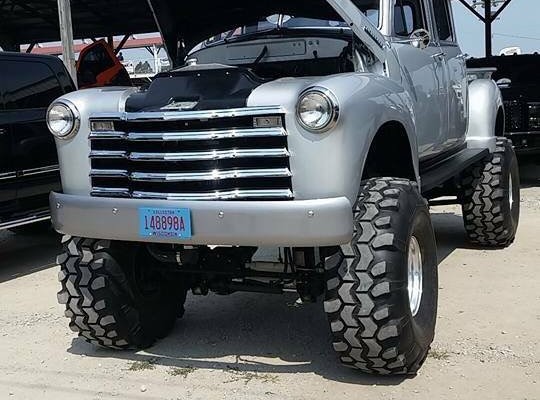