Operation Appreciation 2015 (Day 5): Greg Anderson Wraps Up Another Unforgettable Visit With the Troops

KUWAIT CITY, Kuwait – For several years, Summit Racing Equipment has sponsored a very special trip overseas for a fortunate group of championship drivers. Operation Appreciation has proved to be a very meaningful experience for Summit Racing Pro Stock drivers Greg Anderson and Jason Line, Harley-Davidson Screamin’ Eagle Vance & Hines Pro Stock Motorcycle riders Andrew Hines and Eddie Krawiec, and 25-time BIGFOOT® 4×4 Monster Truck champ Dan Runte. It is always an eye-opening excursion after which the group returns home with a renewed appreciation for what the men and women of our Armed Forces are experiencing on a day-to-day basis.

Of course, it’s an enjoyable time for the group as they are greeted with open arms by the United States military at each base they visit, and although the purpose of the trip is to bring a little bit of home and good cheer to the troops in gratitude for their service, those on the receiving end are eager to show their visitors just how much the gesture of the visit means to them.

This year’s trip took the group to Kuwait, where they made the most of the opportunity and visited five military installations in five days. Greg Anderson wrapped up the tour with this final blog post (below the photo gallery) following a full day at Camp Arifjan. a United States Army installation. 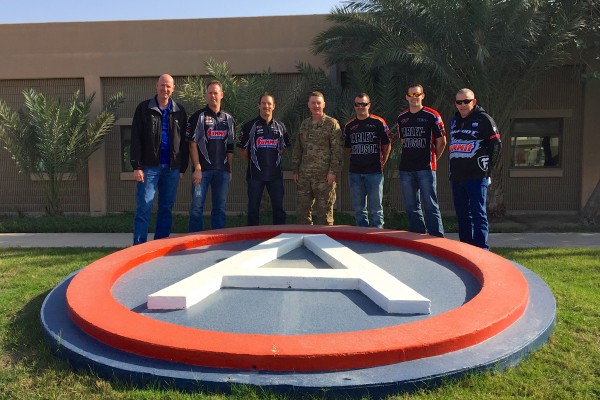 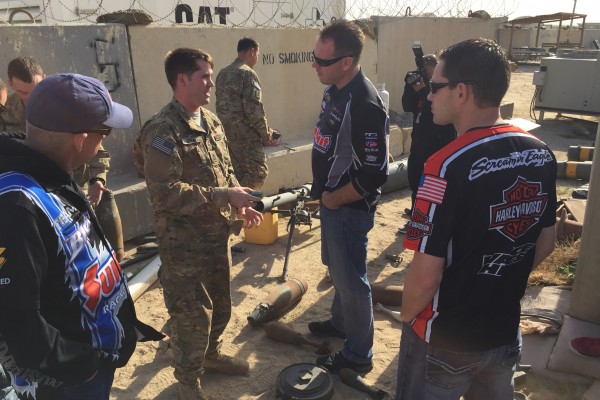 The Operation Appreciation team arrive at Camp Arifjan and are greeted by the commander.

The Explosive Ordinance Disposal unit invited the team to tour their facility, and the first thing they were introduced to was a garden of what used to be explosives.

Eddie Krawiec and Jason Line controlled EOD robotics remotely and got a taste of just how tricky it is to maneuver these machines with a precise and steady hand.

An EOD troop explains the robotics in detail to the team.

Greg Anderson is suited up in the very heavy bomb suit. He has all the tools in hand and is ready to take care of business with the help of the EOD team.

Thank you, Army EOD! It was a great visit, very informative, and very fun.

The troops visited on this last day of 2015 Operation Appreciation went out of their way to make sure the guys had a full experience. Here, they check out some of the weapons carried by the men and women who serve in the desert.

BIGFOOT Monster Truck driver Dan Runte is pretty accustomed to maneuvering big machinery in the dirt, but when it came to driving the Humvee, it wasn't exactly natural. When he slowed approaching a soft, sandy hill, the Humvee was temporarily taken out of commission until another Humvee came along to dislodge it. What better time for a photo op?!

These guys were awesome! Thank you to each and every one of the men and women serving in Kuwait who took the time to show our team the ropes and share their world with us. Operation Appreciation 2015 was definitely a success!

For me, this was a really cool day because I’ve been to this camp once before but didn’t get to meet hardly any of our troops there because of the great 30-year flood that happened. But we finally got to come back, and it was well worth it.

The day started with a meeting with the Colonel, the guy at the top of the chain there at the facility. He was a guy with real quick wit, and right away he clued into the kind of guy Eddie Krawiec is: When Eddie asked him if we could shoot guns, the Colonel said, ‘Well, we won’t need to train you – you’re from New Jersey so you’re already trained.’ That was kind of comical because the drivers who go on this trip spend a lot of time picking on each other and poking fun at one another, and the Colonel got that right away. After speaking with him, we all realized that he is a very intelligent commander. We left that room knowing that the troops there were in great hands. Every base we’ve been to, all of the commanders we’ve met, the first thing you realize is, man, these are some sharp dudes.

Everything is run very, very professionally on these installations, and the commanders have some young kids working for them, but after meeting them, you would think they were in their 40s and not their 20s. Clearly, the commanders of these bases were selected because they earned it. It was cool to start the day that way, and he introduced us to a lot of the troops on station there.

Our first stop after that was EOD [the Explosive Ordinance Disposal unit], and we toured their offices and had the chance to check out a collection of disarmed explosive devices. We went and played around with some robots that they use, and the folks who work there were excited as heck to show us what they did and how to drive those things. They explained the importance of having these devices. Out here in the desert, you just don’t know what you’re going to come across.

These robots are very important, but they’re only as good as the people who control them. The training that went into teaching these guys to control the robotics like they do must have been really intense because they are very good at it. It’s a lot like a video game, and I’ve never been any good at that myself. I guess I’m the wrong generation, because these kids take to it like a fish to water, and they can control the robot so precisely. They have to be gentle because in a real-world situation, we would be talking about explosive devices and not the water bottles we used for demonstration purposes. It’s really amazing how they have learned to handle something so dangerous without having to put human hands on it.

I also got to put on the bomb suit, and that thing is sure heavy. I don’t know how they do it. It takes a lot of strength to move in that thing, but they do it, and part of their training is making sure they can complete tasks while wearing the suit. They told us that part of their regular testing is running a mile in the suit and then having to do math problems. There is such a thing as ‘bomb suit stupid,’ it turns out, when you are overheated and overexerted and still have to think straight but can’t. That is part of what they’re training them to deal with.

I’ll tell you, the one recurring theme we came across all week at every camp was that the troops love their jobs. They love what they do, and they all seem to have found the right spot for themselves. You don’t see that very often in civilian life, but it seems to be about 9 out of 10 in the military are really happy with what they do. It’s a neat deal, and they say that when it’s like that, you don’t even consider it a job – it’s an adventure.

We also got to play around driving some of their Humvees, and we went over hills and through dirt to get a little bit of a feel for what they go through when they go into battle. These vehicles are very impressive and will go over or through just about anything. Be sure you look through the pictures with this blog, because you’ll find some evidence that some guys just aren’t meant to drive a Humvee and should probably stick to their day job.

It was pretty neat to drive a vehicle that powerful, that heavy, and that solid. It was an educational day, just like they’ve all been, and I swear I learn more and more every year having the honor of participating in Operation Appreciation. I still think the biggest thing I keep seeing is how much these men and women love their jobs. We don’t have that back in our spoiled civilian life, but they sure have it here.

I’ve been on a few of these trips, and I can tell you that I was a dummy before. I didn’t realize how sheltered my life was or how much I relied on modern conveniences. These guys go through a lot, and they put everything on the line for us. These men and women are the reason we have the modern conveniences. Each year that I am invited back, I come here and gather more and more respect for what they do.

I really am grateful for this opportunity to spend time with our troops and see a little bit of their lives. It’s so exciting going somewhere different every year and seeing the different challenges presented to these folks. It really broadens our horizons and makes us realize how fortunate we are back in the States, and I’m already looking forward to next year.

Hopefully, we’ll have the chance to do this again because it is just such a neat experience. A big thank you to Summit Racing for sponsoring the trip and for Armed Forces Entertainment who make it all happen and take such good care of us. Most of all, thank you to the men and women who are serving our country – not just in Kuwait, where we spent the last five days, but all over the world. Thank you. We appreciate you, and we’re grateful to have the chance to tell a few of you in person.

2 responses to “Operation Appreciation 2015 (Day 5): Greg Anderson Wraps Up Another Unforgettable Visit With the Troops”