KUWAIT CITY, Kuwait – Four days in the desert of Kuwait have gone by in a flurry as drivers participating in Operation Appreciation have hopped from military installation to military installation, greeting troops and getting the run-down on daily life on-station. The experiences they have collected in this short span of time are beyond ones that most civilians will ever have in their lifetime, and the honor of such a journey is not lost on the group of championship drivers.

Eddie Krawiec has been on the Operation Appreciation tour four times before, but today’s events marked his first visit to Camp Patriot, a small Kuwait navy base and U.S. Army camp located on the Eastern coast.

He offers up his thoughts on the visit below the photo gallery. 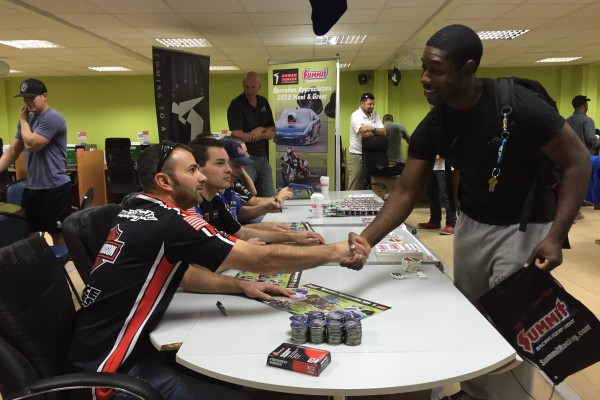 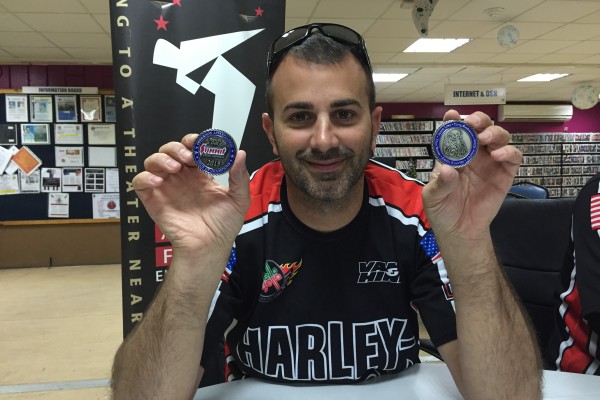 Eddie Krawiec and drivers participating in Operation Appreciation greet troops in the rec center at Camp Patriot, a small Kuwait Navy and U.S. Army base.

Krawiec proudly handed out the 2015 Summit Racing Operation Appreciation Challenge Coin as a symbol of gratitude for our troops and their dedication.

The movie theater on base brings a little bit of home to the desert for the troops.

Dan Runte, driver of the BIGFOOT 4x4 Monster Truck, on the dock with one of the U.S. Navy Captains who took time from their day to share a little about life on duty.

The group was shown a variety of weapons on the small watercraft.

The Captain talked at great length about the forces available while at sea.

Of course the engine house is one of the highlights of the tour of the boat for this group of drivers.

“This is an interesting base because it’s a little bit smaller than some of the others – but the nice thing about it is that means you get to have a more personal experience with some of the troops. I think the best part of the day was seeing how excited they are to tell you about their jobs and what they do. That’s really the cool part about what we do here, when you walk into the room and the men and women are so excited to tell you about their job duties and what they get to do on a daily basis. You can see that it brings them joy to share it with you, and that means a lot to us.

We’ve been out here in the Middle East before and haven’t really had the opportunity before to visit some of the places we’ve been this week. It’s interesting because at some of the bigger bases, you get to see a lot more people, and you get a chance to shake their hands, tell them how grateful you are for what they’re doing out here, and then you move on. But at the smaller bases like Camp Patriot, you have the opportunity to spend more one-on-one time with these individuals, and that’s been nice.

One of the cool things we did today was see the Navy and Army boats. We got to see and touch the actual equipment that is out at sea to protect us, and we were able to engage with some of the individuals who man these boats. They were so eager to share what they could with us. It’s really interesting to get inside and see what they would use at war and hear them talk about it.

Before I started participating in Operation Appreciation, I would be on my couch watching the news and hearing about what was happening overseas, but you just can’t relate to it. The last four years of going on these trips has given me the ability to understand what our troops are actually doing for us. You know, you don’t ever want to go to war or have to fight, and sometimes having your presence known in certain areas makes it safer for everybody. I support that 100 percent. This experience is definitely a special one that has changed my whole outlook on life.

Today, a Captain invited us aboard his boat. He was so excited to show us one of his babies, and that’s the neat thing – everyone is excited to share this with us and explain their role. This Captain took the time to explain the capabilities of his boat and the actions they go through out at sea. This is a very committed individual, just as all the troops are out here. They’re here because they want to serve their country, and they are committed and determined.

We had another great turnout at the meet & greet in the afternoon at the recreation center, and we were pleasantly surprised that we had a good amount of people come through. It’s interesting visiting these different bases because we have to remember that individuals there are actually working. It’s similar to what it’s like for us in the pits – we have thousands of people walking around while we’re working on our motorcycle or car, and often times we can’t just stop to walk up to the ropes and spend time with them, even though we want to. But then you get that break in between and you have the opportunity to go out and meet and greet your fans.

It’s sort of the same thing here with men and women working 12 hour shifts, or sometimes 24 hour shifts, and the shift changes are at all times of the day. Maybe the meet & greet is scheduled when they are supposed to be asleep or when they’re at work or just waking up, so we were happy to see so many people who were all so excited to see us. A lot of them knew about racing, and anytime you get some gearheads come through it’s cool. We’ve had higher ups tell us that they’ve done research on us before we got there or that they know and follow racing, and that’s always something special having that connection. You travel halfway across the world and are looking forward to the experience, and then you get here and find out they’ve been waiting to meet you.

I always look forward to this trip and the opportunity, thanks to Summit Racing and Armed Forces Entertainment, to meet the troops, make new friends, shake their hands, and say thank you. I’ll be honest, I enjoy this and look forward to it, but it’s bittersweet. I wish we could see more troops and do more, but it’s hard to make that happen because you’re only here for so long before it’s time to go home. Of course, you want to get back home to see your loved ones, but you don’t get to see everybody here and that always feels kind of disappointing. I wish we could see everybody.

We have to remember that going home after just a few days is something these men and women don’t get to do. They’re out here for six months to a year or more.

It’s really cool that the troops share so much with us and go out of their way to make this a fun trip for us, and it is an honor to be part of it all. As a group, the drivers all joke around and have a good time together while we’re here, too, but the most important thing is to come out here and be an individual who puts a smile on the faces of our troops, especially during the holidays when it could be difficult for some of them. To be part of Operation Appreciation is definitely an awesome thing, and every day we’re here I’m grateful for the opportunity.”

One response to “Operation Appreciation 2015 (Day 4): Krawiec Sees Value in Visiting Installations Both Large and Small”