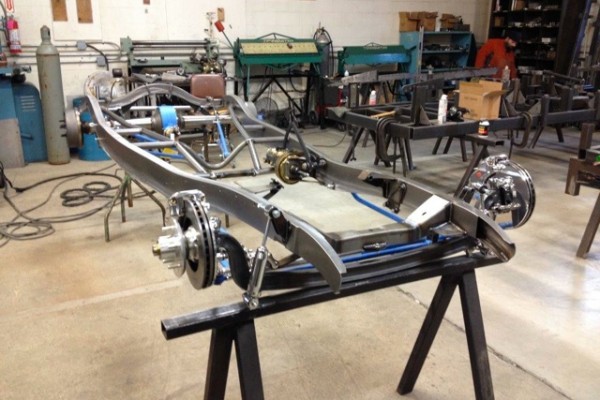 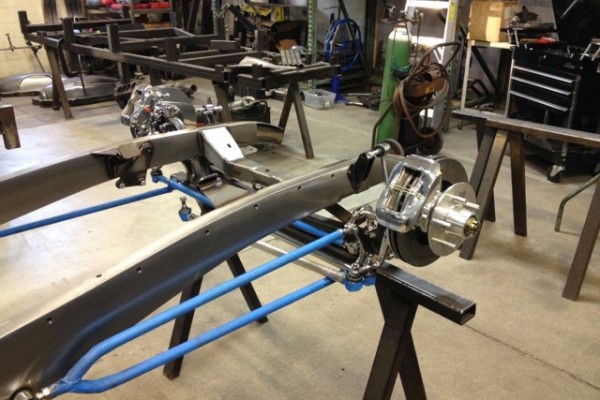 Precision Hot Rods and Fabrication (Macedonia, OH) was tapped to fabricate the chassis. The frame features 1933/34 style boxed frame rails, a tubular transmission crossmember/K-member, and a custom U-bolt plate for the rear leaf spring. The power brake booster and master cylinder will be hidden under the floor just like Uncle Henry intended. That’s one less thing to clutter up the engine compartment.

The front suspension is a combination of parts from So-Cal Speed Shop and Pete & Jakes—5-inch drop I-beam axle, hairpin radius rods, 1937-41 style spindles and kingpins, shocks, steering components, and disc brakes. The monoleaf spring comes from the aptly named Mono-Leaf Spring. That bracket on the passenger side frame rail is the mount for the Flaming River Vega steering box.

A Winters quick-change rear axle is suspended from a buggy spring with Pete and Jakes ladder bars and tubular shocks. So-Cal supplied the Model A style spring mount, ladder bar mounts, and shock mounts. The rear drum brakes are from John’s Industries.

Precision Hot Rods fitted the American Speed Speed33 steel body to the chassis before sending it back to Michael. The body stays true to the original Ford design and features a full steel substructure for maximum body rigidity, doors with full glass and power window assemblies, a stainless steel windshield frame, even custom chassis wedges for proper body alignment when going the full fender route. It has a bunch more interior room than the original car, too.

It’s kind of hard to see, but directly behind the roadster top is the hard tonneau. The Speed33 has an integral convertible top mechanism that stows under the tonneau when you want to go top-down driving. That’s some slick engineering.

Absinthe will be powered by this BluePrint Engines 383-cubic-inch small block Chevy, backed by an American Powertrain TKO 500 five-speed transmission. The 383 is rated and 430 horsepower and 450 ft.-lbs. of torque, which should get the ’33 down the road quite nicely.

The 383 sports a classic three-two induction system. The intake manifold is an Edelbrock Triple-Deuce, and the carburetors are Summit Racing’s own 3x2 setup with three Rochester 2G carburetors, linkage, fuel line, and fuel log. Summit Racing also supplied one if its Ready-to-Run billet distributors and a set of stainless steel blockhugger headers.

“We’re better known for our Drag Week race cars and radical builds like my 1937 Ford woodie wagon and Denny’s upcoming Xbox ’55 Chevy,” Michael said. “So we decided to build something more on the traditional side, but with the ProRides signature look and attention to detail.”

Since the car would be Michael’s, he got to choose what to build. He went with a 1933 Ford roadster and had designer Gary Ragle of Ragle Design draw up a rendering. Gary came up with a design in two-tone green with full fenders and a bigs ‘n littles rake. To our eyes, it’s kind of a 1960s or early ‘70s street rod look. The ’33 was christened Absinthe after the potent, green-colored liquor.

Michael wanted Absinthe to be all-steel, so he went with an American Speed Company’s Speed33™ body. It’s a dead-ringer for an original ’33 Ford, but features a steel substructure for maximum body rigidity, plus a fully integrated convertible top that stows under a hard tonneau. Precision Hot Rods massaged the Speed33 body to fit the chassis, and judging from the photos, they nailed the rendering’s look to a T.

Back in Michael’s shop, the Ford was fitted with the drivetrain. In another nod to “tradition,” he went with a tri-power small block Chevy sourced from Summit Racing. The engine is based on a BluePrint Engines 383 cubic inch long block rated at 430 horsepower and 450 ft.-lbs. of torque. Up top is an Edelbrock Three-Deuce intake manifold and Summit Racing’s 3×2 tri-power carburetor setup that comes complete with linkage and fuel line.

Michael sent us a bunch of photos of the ’33 under construction. As of this writing, the exhaust system is finished and the drivetrain was pulled to get ready for bodywork and paint. We’ll post updates on Absinthe as we get them.