Connor became an amputee and veteran of the U.S. Navy after a tragic accident left the then-23-year-old Second Class Machinist Mate in a coma and fighting for his life. With help from his wife, Keri, Connor not only survived the accident, but has also become an inspiration to other amputees and their families. To honor his incredible courage, Connor’s great-grandmother, Myrtle, passed down her beloved 1967 Dodge Dart to Steve in hopes of seeing it become a symbol of his courage.

After hearing the story of Steve Connor, Lyon McClenahan and his team at Finish Line Speed Shop in Silverdale, WA couldn’t wait to help.

“Steve’s wife reached out to us about the car,” McClenahan said. “My wife worked with his wife, Keri, and they came to me with the idea of fixing the car up after he got it. It had been in Steve’s family for four generations. Steve’s great-grandfather bought the car in 1967 and passed it down to Steve’s grandmother and mother and then it went under a tarp for a while. It was kind of a family heirloom, and they were even planning on passing it down to Steve’s daughter.”

Originally, the Connors were thinking just a new paint job (anything but the existing yellow paint). But with help from companies like COPART, Summit Racing, and over 30 other top aftermarket manufacturers, the Dart project took on a new identity–the “Dream Dart.”

“We went to SEMA in 2014 and networked,” McClenahan said. “We got nine or 10 manufacturers to help out at first and ended up with 37 companies involved.”

One of those companies, COPART, helped procure a low-mileage 2006 Dodge Charger Daytona R/T to act as a donor car for the build.

“The car was 98 percent original, including the Slant Six,” McClenahan said. “We bounced back and forth about keeping the Slant Six, but they wanted it to be a driver so we were leaning heavily toward fuel injection.”

“Everyone in the world told me you couldn’t fit that engine into a torsion bar car like this one,” McClenahan said. “But a friend of mine who builds custom headers came down to the shop, and we kicked around some ideas. He said ‘I don’t see why we can’t make it work…it’ll just take a little time.”

Aside from the custom headers, the HEMI includes an array of aftermarket parts. An Airaid cold air intake and Poweraid throttle body spacer feed the HEMI with added air, and an MSD 6-HEMI ignition controller, harness, and HVC-2 Blaster coils deliver the needed spark. A Flex-a-lite aluminum radiator and electric fan module provide the cooling and a MagnaFlow exhaust system accentuates the sound of that modern HEMI.

Inside, the Dart is outfitted with Dakota Digital gauges, a Vintage Air Gen IV A/C and Heating system, and a Kicker Livin Loud sound system. The underside of the car is sprayed with Scorpion protective coatings, as well as heat and noise reducer, and the exterior is finished in Valspar De Beer black paint.

Steve Connor’s “Dream Dart” made its debut at the 2015 SEMA Show in Las Vegas, NV and was honored with a spot in the exclusive Car Crazy Showcase at the entrance to the show. McClenahan and his team unveiled the Dart to Steve and Keri Connor while it was on stage for a Car Crazy TV segment.

“They didn’t realize it was their car at first,” McClenahan said. “They hadn’t seen it for a year-and-a-half, so when they realized it was theirs, they were pretty awestruck.”

Check out images of the “Dream Dart” below: 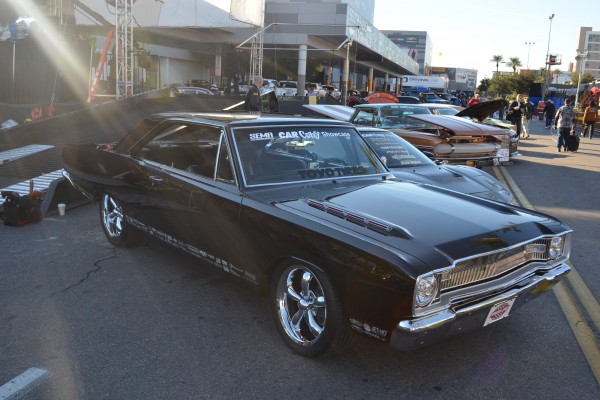 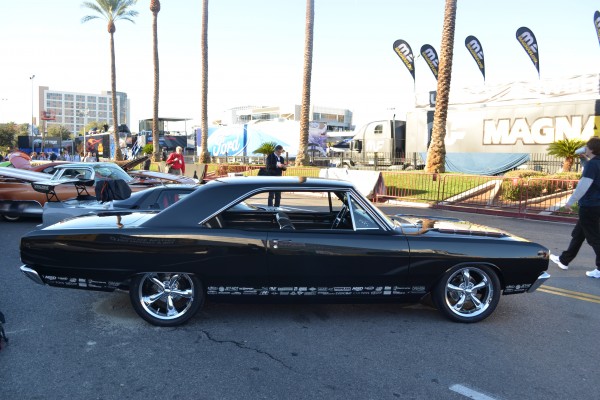