Valyrian Steel: SEMA’s Most Unique Vehicle and the Story Behind its Inspiration LAS VEGAS, NV — One of the most unique vehicles from the 2015 SEMA Show is as much a work of art as it is a car. But that doesn’t mean it doesn’t move.

How fast does it drive?

“We have no idea. Although it has plenty of power, it’s not a performance vehicle. It’s a combination of engineering and art. It’s a sculpture which you can drive,” its info sheet reads.

“Valyrian Steel” wasn’t in the Mad Max movies (the builders have been asked multiple times). But, if you couldn’t tell by the name, it did get some inspiration from Game of Thrones, the popular HBO television show that features the fictitious metal.

While the vehicle’s three seats each have a sword welded into its back, the name came “more from the look of the stainless steel when it’s welded because Valyrian Steel has that,” builder John Perez said.

After extensive planning, Chang started construction of the car in April. Soon, the crew grew to 12 builders who worked in teams.

“It was amazing how well it was planned for the whole assembly,” Perez said. “[Chang] developed the front end first. It developed organically from there. It has flowing curves from the A-arms out to the wheels.

“It started with an arc. We wanted it to be an arc-themed car.”

The vehicle cockpit is circular and consists of five seats, with the driver sitting in the middle of the three-seat front row. Behind the back row is the engine. Behind that… well, that’s a bit tougher to explain.

“The kinetic sculpture on top is inspired by a watch. It’s all stainless steel. It all turns. We literally got that thing on the day after Burning Man started,” Perez said.

The piece moves, but will need some finishing touches.

“A hand-operated cranks turns a shaft which transfers its motion through multiple axis changes to turn all the gears,” the info sheet said. “The inspiration for it comes from differentials, planetary gears, and mechanical watch tourbillons.”

Chris Oremus, another builder, drove the vehicle five miles from Playaworks to the SEMA Show. But it’s not finished. The team still plans to add wheel fenders and sculptural bodywork, among other details.

“We’ve got a lot of work to do on it,” Perez said. “It’s going to get to a point where it’s able to be street driven. All fluid chambers will be made so fluid is visible. The ECU will be put in a military-style box. The instrument panel will either be 3-D printed or water-cut style.”

The team also plans to dial in the suspension, add individual throttle bodies to the engine, build a curved radiator, and create a more unique exhaust.

“It’s going to be an ongoing project. It will continually evolve,” Perez said.

So, where does one turn to build a vehicle as unique as Valyrian Steel?

“The majority of the parts came from Summit Racing,” Perez said. 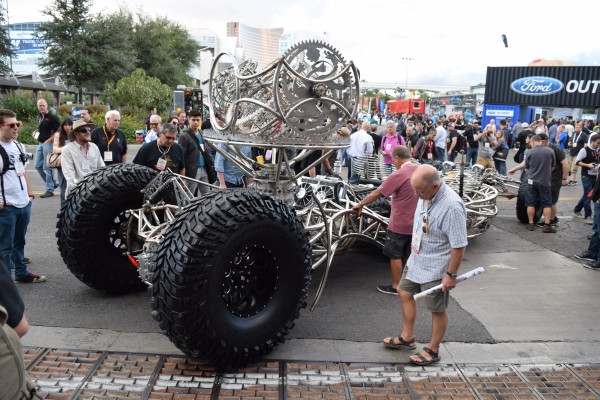 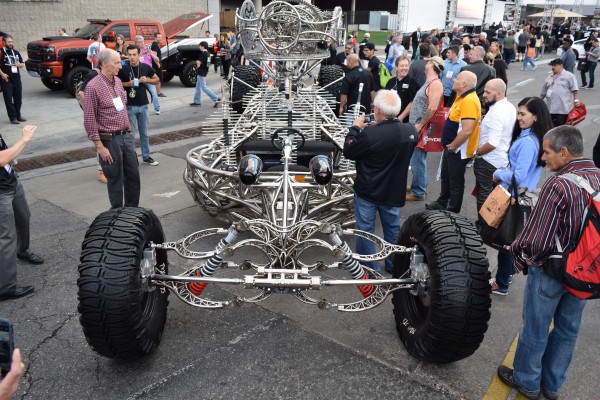 One response to “Valyrian Steel: SEMA’s Most Unique Vehicle and the Story Behind its Inspiration”