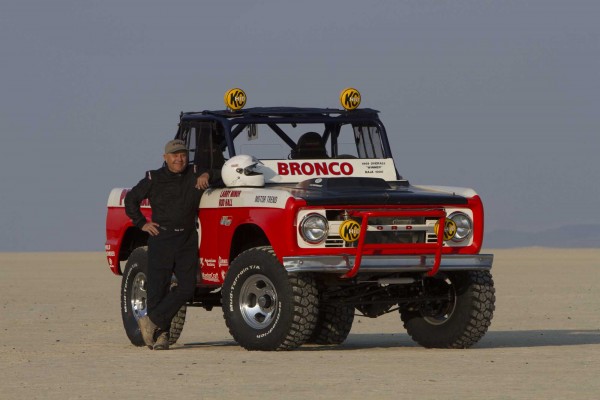 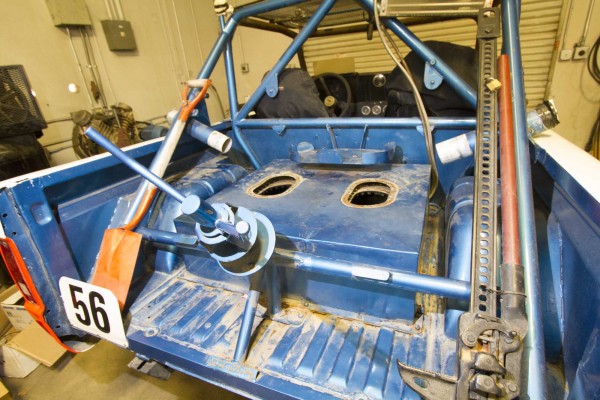 This is what happens when you leave a Bronco out in the sun for almost 30 years. But with help from Samco Fabrication and suppliers like Summit Racing, Rod Hall restored the Bill Stroppe Bronco to take on the 2015 Mexican 1000 The idea was to keep the truck looking much the same as when Rod drove it to victory at the 1969 Mexican 1000, but with modern upgrades only dreamed of 46 years ago.

The roll cage was gone over thoroughly and updated with new bars as needed. The roll cage, frame, and sheetmetal were in very good condition despite the race abuse and years of neglect.

One thing the Samco crew didn’t mess with was the fuel system. They replaced the old fuel cell with a 36 gallon cell, added a Carter electric fuel pump plus Summit Racing and Aeromotive fuel filters, and plumbed everything with Summit Racing AN line and fittings.

The original Ford 9 inch rear axle was bent, but Samco managed to save the housing and fitted the axle with a spool, Motive Gear 4.56:1 cogs, and 35-spline axles from Currie Enterprises.

Aluminum slot mags were the hot setup back in the 1960s. American Racing Wheels Ansen Sprints are a near-perfect match to the Bronco’s original wheels. BFGoodrich, one of Rod Hall’s long-standing sponsors, provided the Mud-Terrain KM2 tires.

Two weeks after the Bronco was complete, Rod Hall and co-driver/granddaughter Shelby Hall ran the 2015 Mexican 1000. After traversing nearly 1,300 miles of Baja Mexico, Rod and Shelby finished second in their class. Not a bad way to start the Bronco’s new racing career!

Baja, Mexico, has long been the quintessential vision of true-grit desert racing. Its serpentine mountain two-tracks and pedal-to-the-metal playas trigger a rush of adrenaline and evoke emotions satisfied only by speed. Characters such as Bruce Meyers with his Manx buggy, Parnelli Jones’ Big Oly, Les Choat’s Burro, and Malcolm Smith and Bud Feldkamp’s Bel-Ray Bullet parted the peninsula’s silt beds and shaped the future of off-road racing.

In 1969, an up-and-coming driver named Rod Hall pulled up to the starting line of the National Off-Road Racing Association (NORRA) Mexican 1000 in a Bill Stroppe Ford Bronco. This wasn’t Hall’s first desert racing rodeo—he had run the 1967 and ’68 events in a Jeep CJ-5—but this time he and teammate Larry Minor were determined to finish at the top of the podium. When the dust settled in La Paz they had won both their class and the overall Mexican 1000.

Rod Hall went on to develop one of the most successful race teams to date, but the Bronco—the only four-wheel drive to take an overall win in the history of the Mexican 1000—got pushed into the corner of a Southern California storage yard and forgotten, drifting sand eventually covering it up to the dashboard. NORRA ran the Mexican 1000 until 1972 when the organization disbanded. The race became the famous Baja 1000.

Around 1999, restaurant owner Gale Pike spotted the Bronco’s roll cage poking out of the sand and recognized it as a Stroppe creation. He purchased the forsaken truck for $5,000, gave it a fresh paint job, and placed it on display in front of a local Denny’s. When the Off-Road Motorsports Hall of Fame (ORMHOF) museum in Reno, NV was opened in 2002, Pike donated it to the museum for public display.

When Mike Pearlman, son of NORRA founder Ed Pearlman, reintroduced the Mexican 1000 as a four-day vintage rally, Hall thought about giving the Bronco a second chance at life. After four years of contemplation, he slipped the Bronco out of the ORMHOF museum and sent it to Samco Fabrication in Reno for a full restoration.

From the Frame Up

Hall had some simple instructions: “Bring it back to how it was when I raced it in 1969. Above all it needs to be reliable—we have to first finish to finish first.”

Project manager Alex Baker drafted a list of products that would survive the hardships of a 1,300-mile desert race and began stripping the Bronco down to its frame.

Under the hood is a Ford Racing 347-cubic-inch, 350-horsepower sealed crate engine capped with a Holley 650 cfm Ultra XP carburetor and a K&N air filter. An MSD 6ALN ignition and Blaster 2 coil supply the spark. Milodon supplied the oiling system. The exhaust consists of a pair of Hedman Elite headers, a pair of Flowmaster Super 10 mufflers, and some Walker U-bends. A Griffin four-core radiator and a Flex-a-lite flex fan tackle the cooling duties. All in all, a simple and reliable powerplant.

When asked about the suspension, Hall laughed. “We knew exactly how to build trucks back then—use the stiffest springs we could find and add a bunch of shocks so the suspension didn’t flex at all!”

Aluminum slot mags were the hot setup back in the 1960s, even for desert racing. After scanning the Internet, Alex Baker found American Racing Wheels Ansen Sprints, a near-perfect match to the Bronco’s original wheels. BFGoodrich, one of Hall’s long-standing sponsors, provided a set of Mud-Terrain KM2 tires.

Baker and his crew rewired and plumbed the entire vehicle. New Auto Meter gauges replaced the dysfunctional plugs on the dash, and KC HiLiTES HIDs were fitted up top and on the front bumper hoop. The interior is trimmed in Ford Blue and features MasterCraft Pro 4 seats, five-point harnesses, and window nets.

Two weeks after the Bronco was complete, a 78 year-old Hall climbed behind the wheel with co-driver/granddaughter Shelby Hall in Ensenada, Mexico for another charge down the Baja peninsula. When the dust settled in San José del Cabo after traversing 1,300 miles of Baja’s best, Rod and Shelby finished second in their class.

You can get a recap of the 2015 Mexican 1000, including Rod Hall’s performance, at Off-Road.com. For information on the Off-Road Motorsports Hall of Fame or to become a member, visit www.ormhof.com. And if you want to build your own version of Rod’s Bronco, Summit Racing has created Rod Hall Bronco Parts Combos.

No guarantees on winning the Mexican 1000, though.