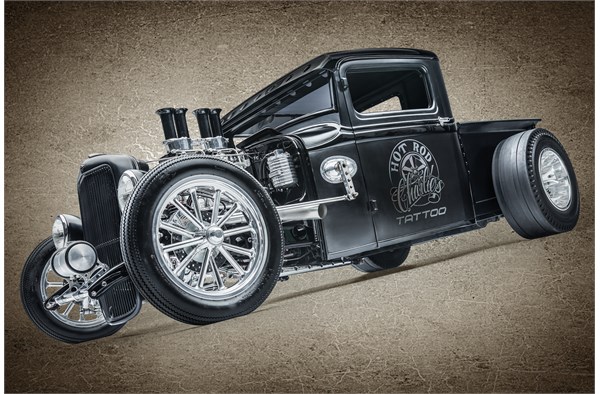 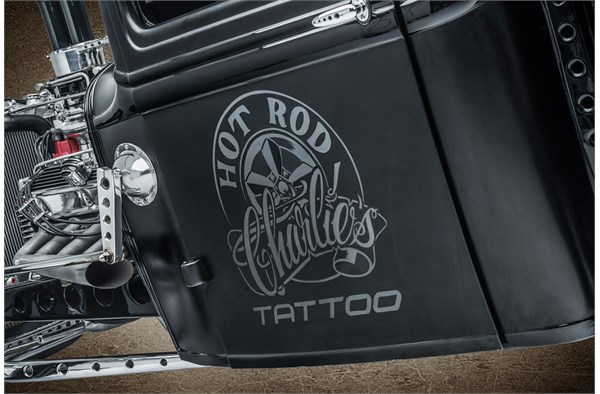 No air ride here! Hot Rod Charlie’s shop truck gets its aggressive stance the old-fashioned way—metalwork. Up front, the frame has been Z’d 4" and features a Super Bell 4" dropped axle. The chassis is Z’d a massive 12" out back and is finished with a slick 4-link suspension setup from Pete & Jake’s Hot Rod Parts, complete with QA1 coil-overs. The vintage drag-racing inspired wheels are actually the pickup’s second set of shoes. “My original sketches had it wearing powdercoated wire wheels with whitewall tires,” said owner Charlie Mounce. “But when we got them on the car, it just didn’t look right.” We think the truck’s polished aluminum rollers (18-inch Radir 12-spoke fronts/16-inch E/T Fuelers rear) look spot on.

What shop truck would be complete without a little shameless self-promotion? Applied by pinstriper Joshua Shaw, Hot Rod Charlie’s logo is displayed proudly on each door. And that’s good, because Mounce drives his hot rod pickup to the shop every day and parks it right outside!

You’ll have to find somewhere else to load your mulch, because this bed is full! The shortened bed features a custom brushed aluminum shroud, topped off with a one-of-a-kind “HRC” nameplate made by master metalworker Jamey Jordan. A Moon fuel tank is nestled snugly in the remaining space. Underneath, you’ll spot a genuine 1932 Kenton County, KY license plate—it’s the original year and county the truck was registered. Of all the custom parts on Hot Rod Charlie’s truck, he points out that this was among the most difficult to find

With all of that Blue Oval ink coursing through his veins, there’s no way Mounce would stick a small block Chevy up front. His pickup gets its power from a tried-and-true 302, pulled from an early Fox body Mustang. Lake headers, genuine Offenhauser valve covers, and a Weiand Hi-Ram intake manifold (complete with twin Holley 4160 carburetors and custom stack-style air cleaners) help give the contemporary powerplant a properly old school vibe.

The pickup’s low-key, monotone exterior gives way to vibrant reds and incredible metal work inside the cab. Created by bead-rolling genius Jamey Jordan of Handmade Seat Company, the bench-style bomber seat is a one-of-a-kind piece made specifically to fit Mounce and his pickup. The equally impressive embossed “1932” seat cushions are of Mounce’s own design, created by the leathersmiths at Hard Luck designs. Other unique touches include the finned Model B dash insert, Lime Works 3-spoke steering wheel, and custom shift knob inset with a genuine 1932 silver quarter.

As part of Summit Racing's annual Christmas photo shoot, Mounce and his awesome hot rod shop truck weren’t the only VIPs in the photo studio. While Santa was taking a well-deserved cocoa break, he was gracious enough to lend a few key pieces from his wardrobe so we could capture this incredible moment.

Shop trucks have it rough.

Instead of lowering springs, they get ladder racks; cool paint jobs and pinstripes take a backseat to nasty dents and dings; and opportunities for self-expression are limited to whatever you can fit on a pair of mud flaps. But when it says Hot Rod Charlie’s Tattoo on the door, and the owner’s name is Charlie Mounce, then you know we aren’t talking about your average shop truck.

Mounce’s 1932 Ford pickup incorporates the signature style of one of Cincinnati’s premier tattoo artists, and a love for classic iron that runs more than skin deep. It’s a fitting tribute to ink and octane that he started years before most of us knew our lifters from our lug nuts.

“I’ve always been into cars—I bought my first one when I was thirteen,” Mounce said. “It was a 1966 Mustang that I picked up for a couple hundred bucks. The thing was rusted through so bad that I wound up pulling off whatever parts I could salvage and bolting them onto another Mustang—a ’65.”

And two years after building the world’s first hybrid Mustang, he got his first tattoo—a skull on his left arm, because (to paraphrase Mounce) that’s just what you get when you’re fifteen and want a tattoo. A few decades later, that same arm is now wrapped in a full tattoo sleeve, showcasing his hot rod credentials with all the subtlety of a straight-piped 429. Some of the highlights include Rat Fink at the wheel of Charlie’s own 1932 Ford pickup, the classic Ford V8 emblem, a vintage gas pump, and enough tools and spare parts to start a swap meet.

And no less impressive is his hot rod history, which reads like a who’s who of Detroit’s finest, including a 1932 Ford roadster, 1949 Mercury coupe, 1951 Ford F-1 pickup, 1961 Lincoln Continental, and a whole stable of first-generation Mustangs.

Like any intricate piece, his latest creation—this awesome Model B pickup—is one that was completed in several stages, and the first order of business was to find a suitable canvas to work on. A crucial step that proved to be a real challenge.

“He stole it right out of the garage, and I never saw him or the pickup again,” Mounce said. Short on space, Mounce had been keeping much of his collection, including his newly acquired, restoration-ready ’32 pickup, at a storage garage while he sourced parts for the build. “It turns out this guy wasn’t paying his bills, so before the bank came to collect, he skipped town and took five of my cars and three built motors with him, including the truck.”

So with a pile of parts and no pickup, Mounce was back on the hunt for another truck. But with a little help from his wife, Shanda, he was able to track down the perfect candidate for his build, and this one wasn’t going anywhere without some smooth negotiating…and a chainsaw.

“It was parked way out in a field with a tree growing through it—right out of the bed,” Shanda said. “I really didn’t know much about it, other than it was a cool, old truck that still had good bones, and Charlie needed to take a look at it.”

The truck belonged to the father of Shanda’s best friend, and it hadn’t moved in more than 20 years. In that time, it had devolved from classic pickup to planter, as a tree took root underneath it and proceeded to grow directly through the Model B’s original wood bed. To make matters worse, the owner was no more interested in letting it go than the 20-year-old maple pinning it to the ground.

“I asked him over and over, but he wasn’t interested in selling it,” Mounce said.

Eventually, at the insistence of the owner’s daughter, he agreed to let Mounce uproot the pickup and begin his project. Again.

“Before he let me have it, though, he wanted to make sure that I wasn’t going to hot rod it,” Mounce said. “But it’s okay, because he ended up really liking what I did in the end.”

Armed with a chainsaw and nerves of steel, Mounce successfully brought down the decades-old tree without crushing the pickup, and was finally able get a better idea of what he’d just bought. “The bed was history—completely collapsed,” Mounce said, “but the rest of it was in pretty good condition. The frame, cab, doors, and grille shell are all original.”

Finally, he put the truck on a trailer and sent it off to Indiana for body and chassis work. Where, following Mounce’s design, the cab was chopped 6 inches, the body channeled 4 inches, and the frame Z’d front and rear to give it the right stance. What he found when he dropped in to check on the build’s progress, however, didn’t look anything like his vision.

“Everything was out of whack,” Mounce said. “Somehow the chassis wound up V-shaped, and he’d pushed the steering wheel in toward the middle of the cab. I don’t even know how you do that. I guess it might have worked if you didn’t want to drive it, but this isn’t a show car—I drive it every day.”

Not thrilled at the idea of driving a “Model V” pickup, Mounce packed up his truck and sent it back home to Cincinnati, where Steve Thompson, head hot rodder at Thompson’s Garage, got everything back on the level. On top of the extensive chassis work, a Super Bell 4-inch drop front axle and slick 4-link rear suspension setup give the truck its aggressive stance. And the bed has been shortened 12″ to complement the chopped and channeled body.

With the bodywork completed, a two-tone gloss/satin black paint job was applied by Noland’s Unique Paint & Body in Cincinnati, and just like any self-respecting shop truck, Hot Rod Charlie’s logo was hand-applied to both doors, along with some stealthy black and gray pinstripes.

If the black-on-black bodywork serves as the outline for Mounce’s design, then the cab’s interior is where he packed in the color. And that color is red. In stark contrast to the truck’s monotone exterior, the interior comes alive with vibrant reds, set against ample amounts of brushed and polished aluminum. The bomber-style bench seat is a one-of-a-kind creation by metal-shaping master Jamey Jordan of Handmade Seat Co., topped with embossed leather cushions of Mounce’s own design. Other touches include Blood Red loop carpeting, a Lime Works 3-spoke steering wheel, Moon gauges mounted in a unique finned dash insert, and a custom shift knob inset with a genuine 1932 silver quarter.

Up front, Mounce left the engine work to local legend Bob “Grandpa” Helton, swapping the pickup’s original flathead six for a 302 from an early Fox body Mustang. That tried-and-true powerplant has been fitted with a few choice modifications to match the truck’s old school hot rod vibe, including a wild Weiand Hi-Ram intake manifold topped with twin Holley 4160 carburetors, plus a hotter cam from Ford Performance, Lake headers, and a set of finned Offenhauser valve covers.

Much like the horsepower-inspired ink wrapped around his arm, Mounces’s Model B is a unique blend of traditional hot rod ideology and uncompromising outlaw attitude—a bond that he wears proudly on his sleeve. And according to Charlie, it’s a relationship that plenty of gearheads can understand.

“Tattoos and hot rods just go together,” he said. “Guys who modify their cars, modify their bodies. They want to stand out.”

But Hot Rod Charlie isn’t done yet. Like most creative minds, his is always running at full tilt, and he has plenty more one-of-a-kind rides in the works. Our only question is: where in the heck is he going to tattoo them all?