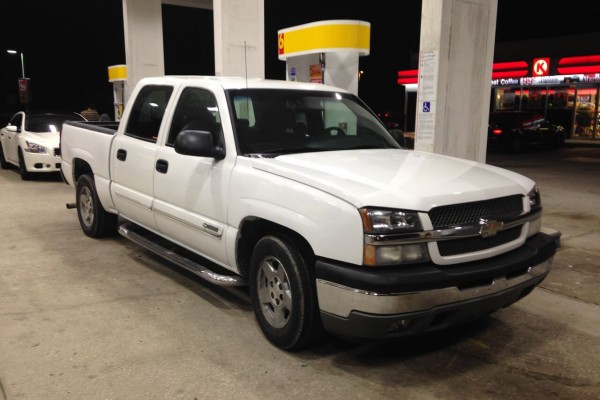 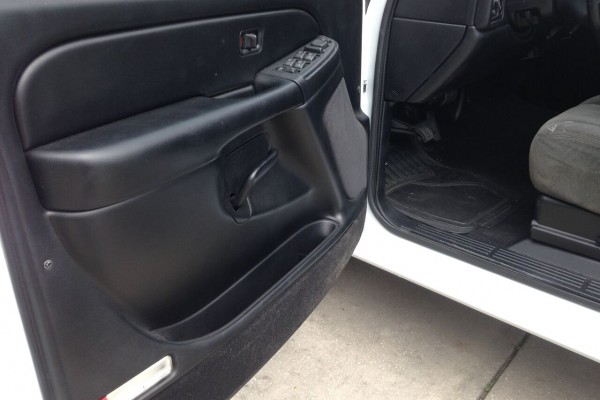 Here is the Silverado on its way to the new owner’s house. It was equipped with a set of nerf bars, but the passenger side one was bent in and upward, and it also wasn’t the look the new owner wanted so they were pulled of the next day. By this point, the CEL had reared its ugly head, so a scan of the computer was in order once arriving home.

The interior surfaces in the GMT800 trucks are notorious for having the color peel and chip off in various places, so it’s no surprise that someone painted over the dash, door panels, other interior plastic panels, and likely the carpet, too. What is surprising is that they opted to go with black, which wasn’t available in these trucks and therefore does not match the stock upholstery. Hopefully we can find some aftermarket seat upholstery that will come close, as this stock cloth has seen better days.

It was immediately apparent that the center armrest lid was broken, and this is another common issue with these trucks. The hinge at the back breaks, but fix-it kits are easily and reasonably found on eBay. We found the front latch to not function properly as well to the point where we couldn’t open it and remove the lid. An internet search turned up a simple fix once you have removed it carefully with a screwdriver or some other implement—lube the latch up with WD-40 so that the parts in the latch mechanism all move easily.

Yep, grey upholstery in a black interior doesn’t quite seem right. With leather upholstery rather expensive, we may have to go with some used take-outs, but we’ll do plenty of research before determining which route to take.

The addition of a set of 2014 Tahoe wheels was a welcome upgrade. The 18-inch wheels and tires combine for an increase in overall diameter of only half in inch over stock, so we don’t have to worry about the speedometer being off to any great extent.

Here you can see the spare wheel in use. In its place under the bed was a Nissan wheel of some sort that looked similar to the factory 16s, but was indeed a different bolt pattern. The tires were mismatched as well and in very poor condition.

Automotive enthusiasts have been modifying trucks as long as they have been around, and the GMT800 series Chevy Silverado/GMC Sierra truck body style built from 1999-2006 is certainly one of the most popular body styles to do so with.

When it comes to owning or not owning a truck, let’s face it; no one wants to be that guy always asking to borrow someone else’s rig. And as automotive enthusiasts, we are almost always hauling this part or that car somewhere. To that end, we set about looking for a 1999-2006 model Silverado or Sierra, with the later offerings preferred due to some interior enhancements that were offered. Plus the 2003-2006 trucks have a more angular look that instills a newer, more modern appearance.

All 1999-2006 Silverado/Sierras are available with the 4.8L, 5.3L, and 6.0L line of LS-based engines, which are more powerful than their Gen 1 predecessors. Performance parts abound for these engines and the interchangeability is near endless.

The truck we will be working on for the duration of this series is a two-wheel-drive 2005 Silverado LS Crew Cab. It was found with 125,000 miles on the odometer and features the 5.3L engine and automatic transmission. The southern, rust-free Silverado was a solid score at $5,000, with a test drive indicating no major or minor issues.

Once the truck was home, it was time to give it a proper assessment, and it would become quite apparent that it had not lived an easy life. At some point—and probably for quite some portion of its life—it was used as a work truck, and the interior upholstery showed signs of not just wear, but damage to the cloth. Something else that was easily noticeable was the fact that someone had painted the majority of the interior black, a color that was never available from the factory.

The exterior had its issues, too, with some very poor paintwork performed on most of the panels, and some extremely poor paintwork on the wheels. But, the truck is white and that covers up a multitude of sins.

On the drive home from the seller’s house, the check engine light came on—surprising because it didn’t do so during the 20-minute test drive. That said, a failing knock sensor, which is a common issue with these trucks and its LS engine design, generated the CEL. Two other immediate areas of concern were the condition of the tires and the squeaking brakes. Three of the stock wheels remained, with the spare on the fourth corner and what looked to be a Nissan wheel in the spare wheel location.

The tires were mismatched as well, with the fronts showing steel belts and the rears being dry-rotted and nearly bald. The braking system included a pair of warped front rotors and squealing front pads, but otherwise worked well.

To get this rig on the road, a quick search of the local Craigslist auto parts section turned up a full set of 2014 18-inch Tahoe wheels with brand new Goodyear tires for $600. It was the perfect deal for right now as the owner wasn’t sure what direction he would take the truck—getting it on the road was the only direction being of immediate concern. With the wheels in motion, it was time to get a game plan together to save this Silverado and bring the rest of the truck into comparable condition to its stout drivetrain. In the next installment, we’ll be upgrading the front brakes and simply replace the factory rear drum components with brand new pieces from Summit Racing Equipment.