Ohio’s Dragway 42 to Reopen This Summer After $10M+ Overhaul

Elyria, OH businessman and drag racer Ron Matcham bought the historic drag strip and a bunch of surrounding land in late 2013 with designs on creating a brand-new, world-class drag racing and entertainment complex in this rural town about 30 miles (as the crow flies) southeast of Norwalk, OH.

Matcham set out to spend about $1 million refurbishing the track. So far, he has spent $10 million on a complete metamorphosis.

Scroll through the slideshow to see construction progress photos at Dragway 42. 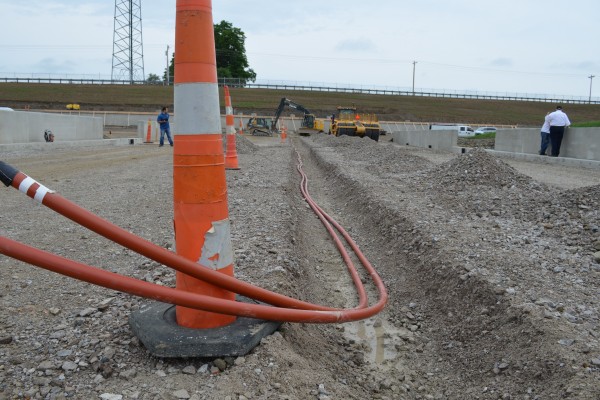 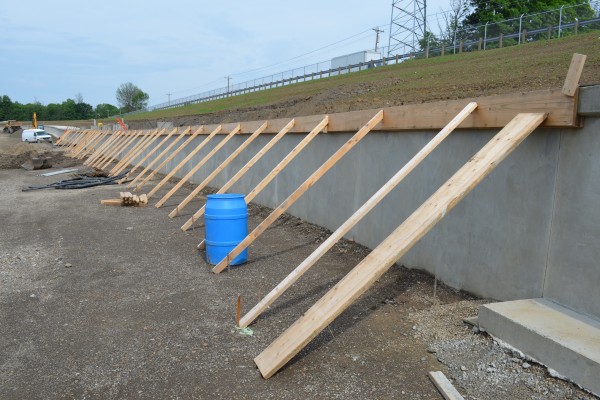 This is another example of Dragway 42's beefed-up infrastructure. One of these large bundles of electrical conduit will power the Accutime Timing System starting tree, and the second is there simply as backup.

Tucking the track into this little valley required heavy investment in erosion-prevention measures.

The track walls are twice the thickness required by IHRA. It's about keeping cars on the track and protecting both racers and spectators.

Bleachers shipped in from Daytona International Speedway will sit on the mound in the background beyond this newly poured concrete wall. Fans will sit hillside as well to watch racing and future concerts.

It may not be sexy, but the heavy investment in drainage is what is going to make Dragway 42's racetrack one of the world's finest, the owner says.

The primary focus of land development activity thus far has been about keeping water off the racetrack. Multiple retention ponds will be on site.

Dragway 42 spent $100,000 to send the lengthened track across this environmentally protected waterway.

6,000 bleacher seats taken from the backstretch of Daytona International Speedway in Daytona Beach, FL. 3,000 seats will sit atop each mound on either side of the racetrack.

The roar and sight of two monster horsepower cars screaming down this track is going to be something.

Heavy rain throughout northern Ohio has slowed track construction, but Dragway 42 officials say the track will open this summer.

If you stop and listen, you can almost hear the cars roar down the track and smell the smoking tires while you wipe the invisible black rubber flecks off your face. Or maybe it's just us.

Owner Matcham and General Manager Joe Gambino are hopeful they can open the facility by the end of July. The 265-acre complex will feature IHRA-sanctioned drag racing, competitive tractor pulling, concerts, and whatever else the creative and passionate new owner thinks of next.

The track will be visually stunning. The starting line is nestled into the ground between two large mounds where spectators will sit hillside to take in the action. Just behind the starting line and staging lanes feeding the track from both directions will be a state-of-the-art tower with suites and a media center.

Atop each mound along either side of the track will sit sections of 3,000-seat bleachers which Dragway 42 officials sourced from Daytona International Speedway in Daytona Beach, FL. Dragway 42 will have a bleacher-seating capacity of 6,000, and a total attendance capacity of 22,000.

In the interest of driver safety (because of limited emergency run-off), as well as creating amphitheater-style seating at the starting line for both racing and music acts, Dragway 42 reversed the track direction. Racers familiar with Dragway 42 will have to adjust to driving the opposite direction.

Most drag strips were built in the 1950s and ‘60s, Gambino said—an era when cars were racing at much lower speeds than they are today.

Both Matcham and Gambino are racers, and though they’re interested in creating new business and entertainment opportunities at Dragway 42, their primary focus has been firmly directed toward the racetrack, specifically. The track will be 4,000 feet with a 200-foot sand trap at the end. The first 800 feet will be concrete. The rest of the track will be asphalt. Some asphalt tracks have a problem with groundwater seeping up to the surface, but because of thoughtful, innovative design and engineering, as well as a heavy investment in drainage infrastructure, Dragway 42 officials say their racing surface will be as good as it gets in motorsports.

“Traditional drag strips have a problem with water seeping,” Gambino said. “We went through great pains—and money—to avoid that.”

“The engineer designed this place’s drainage infrastructure to be able to hold a 100-house development,” Gambino said.

That was the theme throughout the under-construction facility. Nothing was built to spec. Everything is double what it needs to be. They dug multiple retention ponds, and buried twice as much heavy-gauge wiring to the Accutime Timing System LED starting tree and scoreboards as required. 210 lights will illuminate the racetrack at night.

The track walls are taller (42 inches) and thicker. Innovative plastic tubing surrounding the rebar in the track wall’s footer will allow for greater concrete expansion and contraction.

The track, once poured, will feature a light broom finish designed to best hold the VHT traction compound that gives the race track its tacky feel. Today’s tracks, when built the right way, will last about 15 years, Gambino said.

“As racers, we’re at the mercy of the dragstrip,” he said. “That’s why we’re spending the money for optimum traction.”

IHRA will use massive tire-dragging machines to lay down rubber on the track surface, he said.

Dragway 42 chose to partner with IHRA as its sanctioning body rather than NHRA in an effort to lessen direct competition with Summit Racing Equipment Motorsports Park in nearby Norwalk.

“They’re the best at what they do,” Gambino said.

Weather-permitting, Dragway 42 officials plan to open in July, but pledge to be ready for its first scheduled national event September 11-12, when IHRA’s Nitro Jam Drag Racing Series returns to Ohio for the first time since 2006.

Gambino surveyed his surroundings standing near the starting line and smiled.

Photos by Sean Cutright, and video by Al DiVencenzo.