Retro is all the rage.

For Ed Greaves, this retro resurgence has been a long time coming, but the latest throwback offerings can’t hang with his homemade neo-Nova. Boasting high-tech hardware wrapped in authentic ’60s sheetmetal, he’s created a calendar-defying muscle car that spans 50 years of Detroit iron.

Claiming three Novas to his name—a rough-around-the-edges ’62 from his high school days, followed by a 1967 SS complete with a 327 small block, and finally this ’65 SS—Greaves isn’t some newcomer slinging late-model parts at a classic bowtie. He knows a thing or two about Novas and exactly where Chevy left room for improvement.

“These cars weren’t exactly fast back then,” Greaves said. “And they weren’t put together great, either. But now, I think this one drives and looks better than any Nova did when it was new.”

Equipped from the factory with Chevy’s venerable 283 small block, Greaves’ Nova SS rolled off the assembly line in 1965 packing a shade under 200 horsepower, which was capable of nudging the X-body to 60 miles per hour in a decidedly old-school 11 seconds. Today, that’s family hatchback territory. However, like any proper hot rodder, he overcame this absence of acceleration by opting for an engine with a bit more oomph.

He exchanged the Nova’s crusty, cast-iron lump for an all-modern, all-aluminum LS2 plucked from a totaled 2006 GTO (Pontiac’s own ill-fated attempt at a retro revival). According to Greaves, the GTO’s fuel-injected 400-horsepower mill and six-speed T-56 transmission deliver a driving experience that’s light years ahead of an original ’65 Nova SS.

“Yes, it’s possible to get 400 horsepower or more out of a Chevy 283, but you’ll sacrifice drivability,” he said. “With the LS2, the computer does a lot of the tuning, so the Nova rides great and is still way quicker than anything else I’ve built, including my old Pro Touring ’55 Chevy—and that had a 502.”

Seeking to add more power to the factory 400 horses, Greaves outfitted the state-of-the-art LS2 with a handful of tried-and-true performance upgrades, including a set of Mahle forged pistons, a COMP Cams XFI RPM hydraulic roller cam, and a K&N cold air intake.

Of course, that hopped-up LS2 is a lot for a 50-year-old chassis to handle, which is why he called in some reinforcements. To contend with all of that twenty-first century twist, Greaves ditched the Nova’s antique front subframe in favor of a cutting-edge setup from the guys at TCI Engineering.

Constructed of tubular steel, the bolt-in TCI front clip features a double wishbone suspension system with QA1 adjustable coil-overs and two-inch lowering spindles, plus 12-inch disc brakes for contemporary stopping power. The setup wouldn’t look out of place under the hood of a late-model muscle car, but unlike a fit-to-burst modern engine bay, Greaves’ execution comes across as clean and uncluttered.

“I tried to hide as much of the electronic and air conditioning stuff as I could, because I think it takes away from the engine,” he said. “Most of it’s tucked under the fenders and stuffed behind the dash. The battery is hidden in the trunk—I just wish I would have found some space to add power steering.”

This seamless blend of old and new continues into the body and paint, where Greaves—plus long-time friend and professional body man, Joe Enderle—took great care in rehabbing and reimagining the Nova’s aging sheetmetal.

“When I first bought the car, it was in decent shape, but it needed some work,” Greaves said.

However, sandblasting revealed rust scattered throughout the Nova’s original bodywork.

“By the time we were done, Joe and I had patched the floor in a couple spots, replaced the entire right rear quarter and half of the left, plus the right door skin and both fenders,” he said. “Good thing Joe is the master of panel alignment—everything from the trunk to the hood is lined up better than it came from the factory.”

“If you have any pride in your work, you’ll find a way to line it up!” Enderle said.

With the sheetmetal sorted, Greaves picked up the spray gun, laying down a moody two-tone House of Kolor paint job, featuring Platinum Pearl on the bottom and a custom-mixed Gunmetal Gray on top, separated by a black pearl accent stripe. The trim adds to the low-key look, swapping the traditional chrome for something a bit subdued.

“When I was coming up with ideas for the car, I went to shows and made notes on what I liked and what I didn’t,” Greaves said. “And it seemed like everyone had everything polished or chromed. You see so much of it. So I decided that I’d do something different and scuff all the trim, and if I couldn’t scuff it, I’d paint it.”

Armed with a stack of Scotch-Brite™ pads, Greaves gathered all of his courage and gave the Nova’s chrome window trim, door handles, and grille a brushed look, then refinished the bumpers in nickel—rather than brighter chrome—to complete the subtle transformation. Being too rough and pitted to brush or re-plate, the Nova’s characteristic tail panel was sanded smooth and painted body color to match.

That discreet and modern look is continued inside with coordinating dark gray vinyl upholstery; each seat (the front buckets borrowed from a ’64 Impala) finished with a black center stripe and bright red stitching for a pop of color. The driver is treated to a leather-wrapped Billet Specialties Split Spoke steering wheel and Hurst Competition/Plus shifter, plus a full complement of Auto Meter Phantom gauges where the original clocks once were.

Boasting clean lines, impressive power, and a low price tag, the Nova SS was a hit among enthusiasts, but 50 years of advancement left Chevy’s shining star looking dull by today’s standards. Rather than laying down the cash for a new car wrapped in old-school aesthetics, Greaves relied on his hot-rodding roots to infuse the best of the ’60s muscle car era with today’s unparalleled performance and refinement. The result is an authentic tribute to muscle cars of all eras, and one that’s guaranteed to be a future classic. 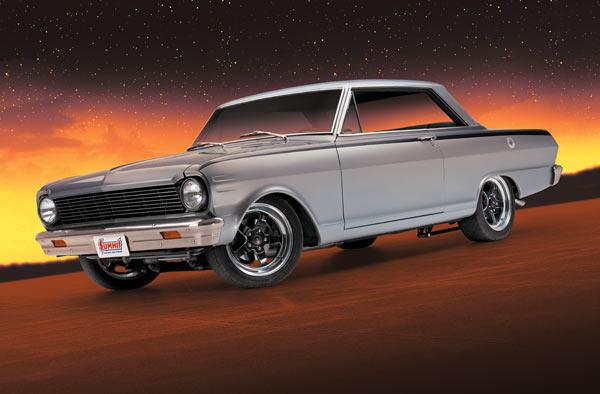 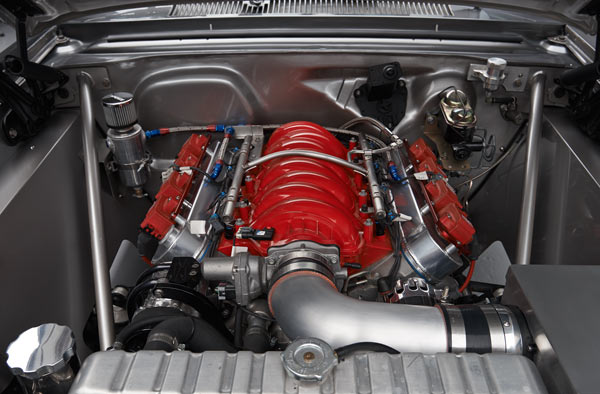 Every piece of the Nova’s original chrome trim has been brushed to a satin finish for a sleek, stealthy look. “It killed me to have to do that to the door handles,” says Ed. “The original ones were so pitted that I had to buy a new pair, then I immediately scuff them up!” The added color depth in the bumpers comes courtesy of a nickel coating (rather than traditional chrome), and the whole look is finished off with a custom billet fuel filler cap.

The Chevy LS2 nestled in the Nova’s TCI Engineering tubular front clip was sourced from a 2006 GTO—Pontiac’s own ill-fated attempt at a musclecar revival. Later, Ed would come to find that this particular example had spent some amount of time at the bottom of a saltwater canal in Florida, necessitating a .010 overbore and a set of matching Mahle forged pistons to reverse the damage.

If the sound emitted from the cammed LS2 and custom-bent exhaust isn’t doing the trick for you, Ed has equipped the cabin with a cleverly hidden Secretaudio SST stereo system. The head unit is tucked away in the Nova’s glove box, while the receiver is concealed behind a removable panel in the trunk.

Originally Arctic White over a blue vinyl interior (coincidentally the same color combination as the Nova Ed drove back in high school), the ’65 now wears a House of Kolor two-tone paint job, applied by Ed. The bottom is wrapped in Platinum Pearl, offset by a black pearl accent stripe. Ed achieved the custom Gunmetal Gray upper hue by simply mixing the two colors until he was happy with the result.

With the widespread adoption of fully independent suspension, today’s musclecars are finally beginning to shake their reputation as drag strip devotees. To bring the Nova up to snuff, Ed ditched the ancient front subframe in favor of a tubular steel front clip from TCI Engineering, lowered on QA1 front coil-overs and 2" drop spindles. Out back, Calvert Racing rear leaf springs and CalTracs traction bars keep the tires glued to the pavement. Weld RT-S S71 wheels and BFGoodrich G-Force Super Sports round out the handling package.

“Looks like new” would be an understatement! When the Nova rolled off the assembly line in 1965, initial quality was a bit more…relaxed than today’s standards. So when it came time to replace much of the Nova’s rusted sheetmetal, Ed called in his long-time friend and body shop veteran, Joe Enderle, to piece it back together with a modern eye for fit and finish. With 50 years of experience, he’s been reassembling daily drivers and hot rods since the Nova was new.

Body and Paint By: Ed Greaves and Joe Enderle