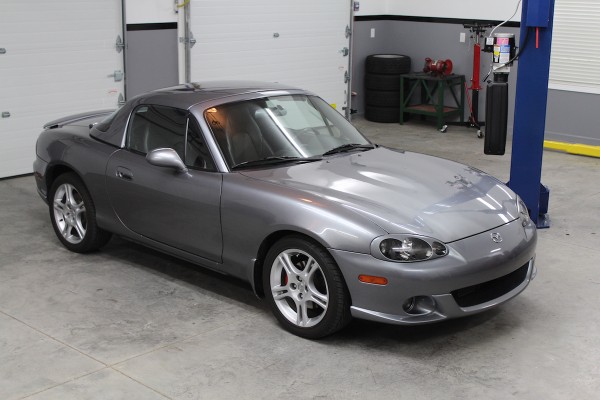 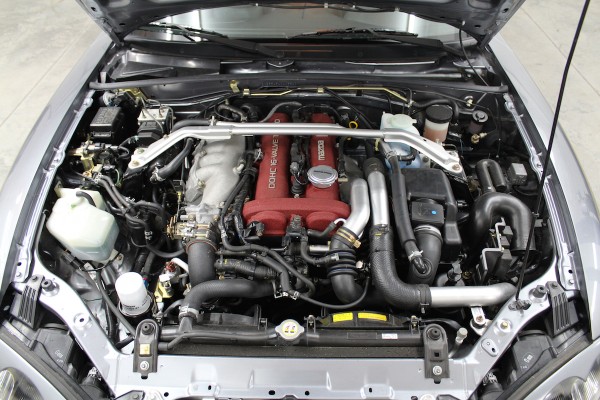 Tom’s choice for Project Thunderbolt is this creampuff 2004 MazdaSpeed Miata. The Titanium Gray Metallic car was well cared for and has low mileage for its age. The Mazdaspeed versions are rare and desirable—and Tom’s gonna take this one apart and put a ‘Murican V8 in it.

The Miata is powered by a 1.8L turbocharged and intercooled 16 valve four cylinder engine. This stout little mill inhales 7 1/2 pounds of boost to produce 178 horsepower and 166 foot pounds of torque. Good, but not LS3 good.

Here we go! “My heart was really pounding here, as I’ve never tore apart a car this nice before,” Tom told us. But starting with a newer, rust-free car means things come apart easily.

Tom is just moments away from “the big split” where he separates the drivetrain from the body. Before this can be done all fluids must be drained, wiring unplugged, and a variety of suspension bits unbolted.

Tah-dah! Having never done anything like this before, Tom says it was a pretty wild moment. “I’m filing this photo under “things I do that my wife will never, ever, ever understand,” he explained. It’s OK, buddy—we do.

Here’s the engine bay after extracting the drivetrain and other related engine components. With the engine out of the way, you can see that there is enough space to bolt in an LS3. Next month: more disassembly.

Light car + big engine = silly go-fast fun. Back in the 1940s and ‘50s it was Ford flathead, Olds, and Caddy V8s in Model As. Pontiac stuffed a 389 in a mid-size Tempest and ushered in the musclecar era with the 1964 GTO. Carroll Shelby’s 427-powered Cobras terrorized the competition (and probably the drivers) at road courses in the ‘60s. And let’s not forget Willys and Austin gassers, V8 Vegas and Pintos, and countless home brewed V8 swaps in all manner of small cars.

A popular modern-day variation of this formula is stuffing a V8 in the humble Mazda Miata. You would think a heavy V8 in the nose would ruin a Miata’s sweet handling characteristics, but Tom Tharp is here to prove it ain’t necessarily so.

“The mantra of little car, big engine has intrigued me for as long as I can remember,” he said. “My favorites are two-seat V8 roadsters—powerful, balanced sports cars that are sure footed and deliver an addictive wave of torque when you hit the throttle.”

And that’s exactly what Tom’s latest project is. He has taken a perfectly good 2004 Mazdaspeed Miata (the rare version with a 178 horsepower turbo 1.8 liter four) and torn it apart to make room for a Chevrolet Performance LS3 crate engine. He’ll be posting video on the aptly named Project Thunderbolt at Tom’s Turbo Garage. OnAllCylinders will be bringing you monthly updates on his progress and links to the video series.

In the next installment of Project Thunderbolt, Tom outlines the project goals and breaks out the tools of destruction to begin disassembly of the Miata in preparation for the new drivetrain.