Chess is a game of strategy—you start with a board full of pieces and hope to still have your king by the end of play. When Dave Madej jumped back into the hot rod game, he cleared the board and ended up with one royal ride: this outstanding 1932 Ford Coupe.

The Deuce is fast, loud, and to be honest, a little uncomfortable on those long runs, and that’s just the way Madej likes it.

“I paid sixty bucks for a 1960 Chevy that burned a little oil. Back then you could buy bulk oil right at the gas pump. I think that car used about a gallon of oil every week,” Madej said.

The youngster restored the car’s ragged exterior and gave it a fresh coat of paint before moving on to his next ride, a 1956 Chevy. “I know everyone wants a Tri-5, but I bought it because it was only $25. The transmission was blown so I drove it home 15 miles in the only gear that worked, which was reverse,” he said.

As the years went by, Madej cycled through a series of sweet muscle cars followed by a 1932 Graham-Paige sedan.

“The sedan took nine years to build. My family and I enjoyed that car, but a guy wanted to buy it, and by then I really wanted to build a ’32 Ford coupe,” he said. “In the hot rod world a ’32 Ford is it, so I had to let the sedan go.”

With an empty garage, Madej was ready to collect the pieces that would become his dream Deuce. His first move was an important one—the build had to have a solid foundation.

“The stock Ford frame can’t stand up to big horsepower,” he said. “Luckily, my buddy told me about Barry Lobeck, who was building boxed and reinforced ’32 frames.”

Madej hooked up his trailer and paid a visit to a fellow who had a Lobeck frame for sale in Medina, OH. He liked what he saw and came home with a rolling chassis complete with a Super Bell I-beam front suspension and 4-link coil-over setup in the back.

To top off the beefy frame, Madej ordered a fiberglass 3-window coupe body with a two-inch chop from Florida.

“When it comes to ’32 Fords, three-windows have more interior room than five-window coupes or convertibles, and I need all of the space I can get,” said Madej who is 6’4”.

He would have to wait four months for the body, and that gave him plenty of time to formulate a game plan for the wiring harness, hydraulic lines, and drivetrain.

“I mocked up all of the systems first. I tried to think three moves ahead, so if something broke after the car was finished it would be easy to repair,” he said.

Eventually, the body arrived along with some unpleasant news.

“It didn’t fit right and the doors wouldn’t close,” he said. “So I called the manufacturer and they said if it was on the frame, I was in the ballpark. The rest was up to me. I had that body on and off the frame a dozen times making little cuts. Man, that first cut was hard to make, but it got easier as I went along.”

With the body and frame fitted and the doors operational, he spent some quality time with a sanding block and plenty of elbow grease. Of course, he had to disassemble the entire shooting match to apply the hot rod’s original flat white paint. But why flat white?

“Every hot rod you see is either red, yellow, or black and I wanted something that would stand out. I think I only had about $76 in that first paint job,” he said.

“A Flathead is classic, but a 350 Chevy is bulletproof, and you know the old saying…built Ford tough with Chevy stuff,” he said.

He located a low-mileage small block at a salvage yard, but his queen captured the piece before he could make his move.

“I didn’t know it, but my wife bought the engine out from under me as a surprise Christmas gift,” he said. “But before she picked it up, the salvage yard mistakenly sold it again to someone else.”

Thankfully the story has a happy ending—the engine was retrieved, Madej got his present, and Christmas was saved.

He topped the Chevy block with an Edelbrock Three-Deuce manifold and a set of Rochester 2G carburetors he got from a friend.

“I liked the look of the triple-deuce setup and thought I’d give it a try,” he said.

The complicated induction combo came with some unexpected frustration, however.

“Man, I rebuilt those carbs three times. I would have sold the entire setup for 25 cents if someone would have offered, but then I found out I only had a vacuum leak,” he said.

Dressed for success with a set of Edelbrock Classic cast aluminum valve covers and Moon breathers, the Coupe’s exposed engine is a treat for the eyes, and thanks to a COMP Cams Magnum bumpstick, it’s a treat for the ears, too.

“You know, I just wanted the engine to have that rumpty-rump sound,” he said.

Open up the suicide doors and check the hot rod’s all-business black fabric interior. There’s no A/C or stereo, but a vintage Ford V8 steering wheel sits on top of a salvaged column while a Sunpro Super Tach complements the dash-mounted Dolphin gauges. Plus, a Lokar shifter and 8-ball knob give the interior even more hot-rod cred. But you don’t have to take our word for it—the dashboard proudly carries the autographs of both Don Garlits and Gene Winfield.

If you ask Madej, he’ll tell you he completed the Deuce Coupe in 2005. If you ask us, it’s far from game over. He’s already refinished the chassis with white paint from a Krylon rattle can, repainted the body with a 90/10 mixture of flat- and gloss-clear over PPG white paint, and revised the ’32’s graphics (it took him three tries to get the firewall’s checkerboard motif just right). Last winter, he even added surface-mount door hinges and crank-down windows because that’s how they came back in 1932.

“Next, I want to build a single push-bar for the back of the Coupe, I think that would be cool,” Madej said.

The push bar may have to wait for a while, since he likes driving his car as much as he likes working on it.

“I built this car to drive, and I drive it like I stole it. I usually put about 2,500 miles on it every year,” he said. It’s a pretty good bet the Coupe will be better than ever the next time we see it. When it comes to hot rods, Madej always brings his A-game! 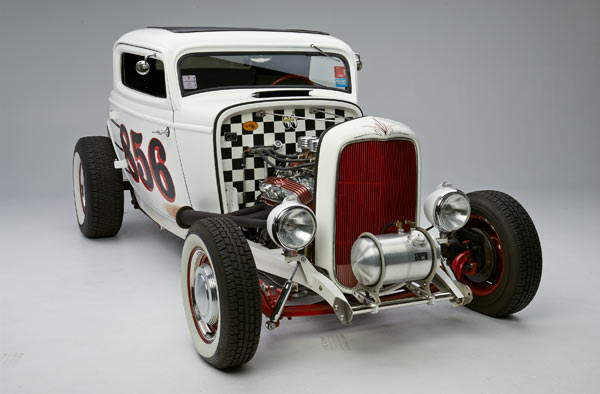 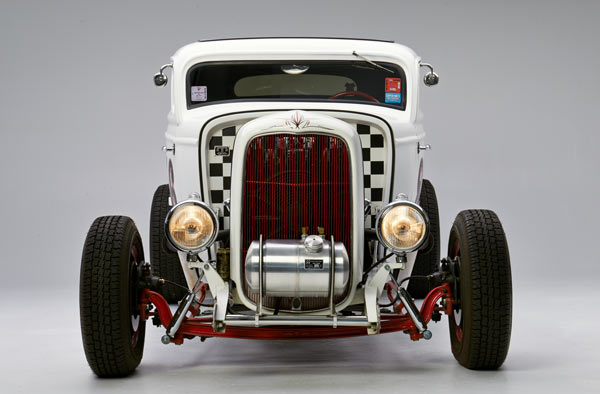 Wow—big whitewalls, a matte-white paint job, and a checkerboard motif on the firewall! Dave Madej’s 1932 Deuce Coupe delivers a serious vintage vibe, but he built it from the ground up using a collection of modern components. “I had to build it in my head,” says Dave. “These things don’t come with instructions, you know.”

“I used to carry moonshine in the front fuel tank, but now I fill it with race gas,” explains Dave. A frame-mounted valve lets Dave feed the engine pump gas from the rear tank on the highway, and then switch to race fuel when he hits the dragstrip. “Race gas is expensive and this way I only have to buy a few gallons at a time,” adds Dave.

Nothing says hot rod like a trio of Rochester 2G carburetors. Dave got the carbs from a friend and topped them with chrome air cleaners he found at a swap meet.

“Most guys run air conditioning on a car like this. But I think Henry Ford had a better idea,” says Dave. He ditched the A/C in favor of the period-correct climate control system. “Fresh air enters the cabin through the scoop and exits out of the crank-down rear window,” explains Dave.

“I had bias-ply cheater slicks on the back, but the car got a little sideways on a damp exit ramp and that was that,” says Dave. Now the Coupe rolls safely down the highway on a set of modern radials with a retro look.

Special thanks to: My wife Rose, daughter Melinda, and son Ron, plus Randy, Jeff, Mike, and Jim