Old-timers complain about the kids these days, with their “Internet,” and “smartphones,” and lack of appreciation for fine hotrods. Well, we found one kid they like a lot, in spite of his new-fangled gadgets.

Since the age of 14, Dan Panaia had helped out around the shop at Performance Kent Automotive, which is owned by his dad, Mike. He worked on and owned lots of late model Camaros and Trans Ams, but he wanted something different to call his own.

“My friends were into things like Fox-body Mustangs, and I just didn’t want one of those,” Dan said. “I wanted to drive something older, and something you didn’t see at car shows all the time. The first-generation Buick Riviera fit that description perfectly.”

He started searching the Internet for a fixer-upper Riviera, and found what appeared to be a suitable 1964 model in Boston. After a long drive, he discovered the car was in far worse shape than the online pictures let on.

“The floor was so rusted out that the only thing holding the seats up was the carpet,” he said.

He took it home anyway, having driven too far to return empty handed. Besides, it contained a potent 425-cubic-inch Nailhead engine, along with some other salvageable components.

Wiser but poorer, Dan returned to the Internet and found a 1963 Riviera body and chassis in upstate New York. This one had only run up 30,000 miles on the odometer before it was entombed in a garage. It stayed there, covered in boxes from 1968 until Dan’s arrival in 2008. Once the debris was cleared away, Dan found what was once a fully-optioned Riviera with power seats and windows, tilt steering, A/C, and walnut inserts on the interior.

Armed with a near-perfect project car and a handy parts car, Dan set to work. He was attending mechanical engineering classes in college, and working on other cars for his dad, but still found time to work on the Riviera. Since reproduction parts for the Riviera were rare at the time of the build, Dan had to either restore what he had, or get help from friends to find or fabricate replacements.

“I wanted a car I could drive in comfort,” Dan said. “So I modified the frame for an air suspension system, and I swapped in a Chevy 200-R4 transmission for the overdrive. I had to custom-machine an adapter to connect that transmission to the Nailhead. That took a lot of trial-and-error.”

Dan’s machining experience also helped him devise all-new brackets for the engine accessories, re-arranged to accommodate the York air compressor, plus a custom air cleaner to fit between the dual Carter carburetors and the stock hood.

Outside, Dan and his dad handled all the body work and paint, with the last coat of clear applied by Mike when Dan had to rush off to class.

“We started with the silver for the stripe, then masked around the stripe for the top and bottom colors,” Dan said. “I really like the orange you can get on new Chrysler cars today, so I tried to capture that shade for the car.”

Dan also opted for another dash of 21st-century flavor for the Riviera: he can control the air suspension and many other functions of the car with an app on his smartphone.

“I love to mess with little kids looking at the car, like dropping the suspension when they touch the door handle. It’s like they discovered a secret switch only they can use!”

After three years of work, Dan and Mike declared the Riviera complete in June of 2009. Dan puts about 2,000 miles on the car every year, cruising to car shows with his girlfriend and car buddies.

“The guys running the car shows usually won’t let me park by my friends in the late-model sections,” he said, “but I’ve made a lot of new friends at the Goodguys shows. They have a little snow on the roof, but when we go out to lunch, they get a sweet discount!” 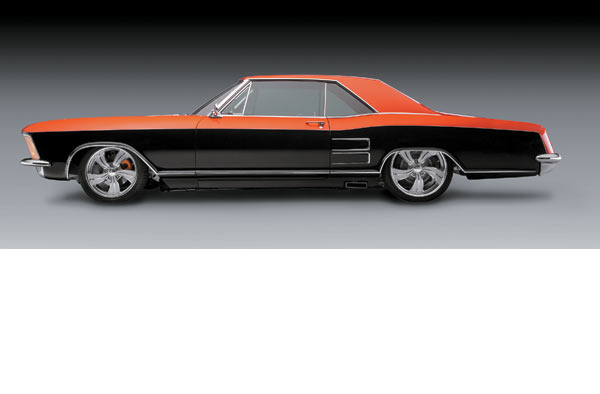 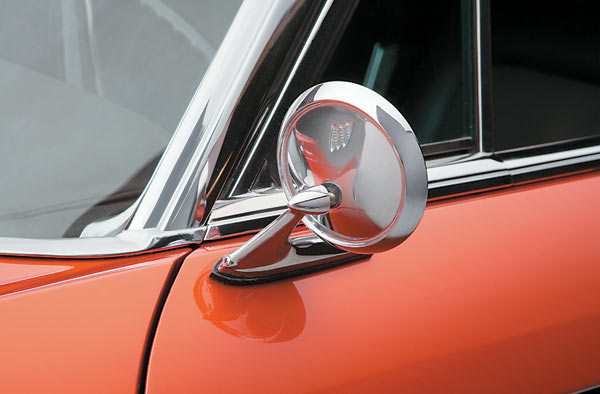 The Riviera was made for cruising, and most of Dan’s work was focused on enhancing that experience even further. He modified the frame to accommodate Firestone air springs on the corners, which are controlled by Accuair electronics, and inflated by a York engine-driven air compressor. “It’s the kind of compressor you’d find in a 1960s Mustang with A/C,” Dan says. “It’s super-reliable, and it looks like it belongs with the other accessories.”

As a college student, Dan didn’t have a lot of money to spend on new parts. Besides, at the time he started this project, reproduction parts for Rivieras were almost unheard of. This simple side mirror required hours of searching and gallons of elbow grease alone.

Rather than money, Dan invested a lot of time, meticulously restoring the body, engine, and trim. Having years of experience and access to his dad’s shop certainly helped, but for a car this size, it was still a lot of work.

Dan re-imagined the interior, replacing the dated walnut inserts with fabric and metal, installing the dash from the ’64, and re-upholstering the stock buckets. Modern tech is kept minimal, like the touch-screen controls for the air suspension, and a couple of Auto Meter Designer Black gauges.

“Unlike the crowded engine bays of F-bodies I usually work on, older cars have all this room to work with,” Dan says. “To keep that spacious look, I kept all the components tight and hid as many wires, fluid lines, and hoses as I could.” Dan’s machine expertise also shows in the custom air cleaner and accessory brackets. As nice as it looks, the overbored Buick Nailhead can also perform, cranking out up to 380 horsepower and 500 ft.-lbs. of torque.

Symmetry like this doesn’t happen by accident. Dan designed the rocker panel exits for the rectangular exhaust tips so that they would align with the ducts on the rear quarter panels. He also had to assemble a custom exhaust system to get from the engine to the new exits.

Everyone—including Dan—loves these giant front marker lights. No LEDs or halogens here, and with no reproductions available, it took a lot of work to restore that original warmth and depth. The Riviera also retains the original high/low beam switch on the floor.

Once the Riviera was finally finished, Dan soon started itching for a new project. “I’m working on a 1965 Skylark for autocrossing,” he says. “It’s going to be wild!”

Mike Panaia, and the countless friends who helped find and fab parts