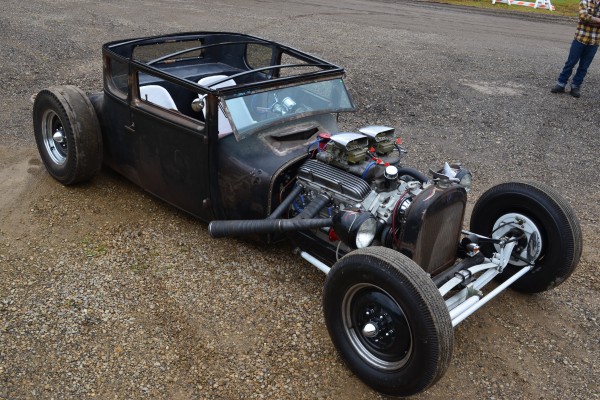 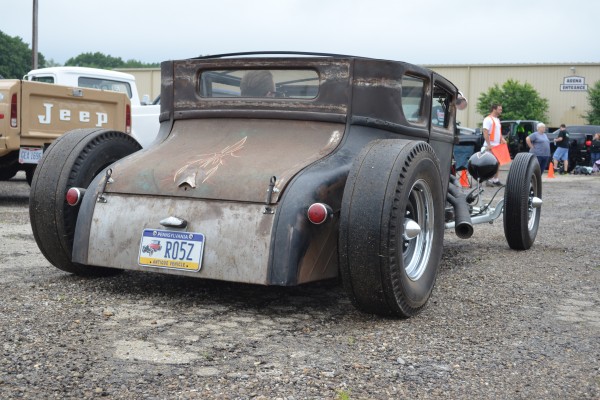 According to Paul Nervo Jr. of Erie, PA, it is possible to find a one-off custom hot rod on a tree—if you have the right vision.

While a student at WyoTech in Wyoming, Nervo Jr. was taking a road trip through Utah when he spotted this 1927 Ford sitting in a field. “There was a tree—about 60 feet tall and two feet around—growing right through the floor,” Nervo Jr. said. “We came back the next day with the equipment to take the tree down a few sections at a time until the car was free.”

Once Nervo Jr. plucked the rustic Ford from the tree, he spent nine months building this distinctive (and deceptively fast) rat rod using parts and components from a variety of sources—a 1967 El Camino, 1940 Ford, and even a Maxwell steam-powered vehicle!

“You can stare at it for a couple hours and continue to find something new,” Nervo Jr. said.

Ironically, a lot of Nervo Jr.’s hard work went into an area you can’t see: the undercarriage.

“You should see all the X-bracing underneath,” he said. “That was the biggest challenge—getting everything where it needs to be and setting up the rear-end right. The car is not channeled either. It’s all suspension—there are no air bags, no nothing. And the frame is right underneath where it should be.”

To help achieve the ground-hugging lowered look, Nervo Jr. fabricated a transmission tunnel and created brand new sheetmetal, including new floor pans where the tree used to grow. He also chopped 11 inches out of the window and stretched the doors to give it that low, lean look. The rear suspension consists of dual coil-overs with a four-link setup; the front suspension utilizes a Super Bell carbon fiber monoleaf setup. A set of 1940 Ford front brakes, complete with the original Cal Custom scoops, provide much of the stopping power.

To get the old rat moving quickly, Nervo Jr. turned to an old Mouse. He took an old small block Chevy 350 from a 1967 El Camino and built it into a 406 stroker. The engine features Keith Black pistons and 6-inch rods, a Chevy 400 crankshaft, Lunati camshaft, and dual 650 cfm Holley carburetors on a cross-ram intake manifold. It’s mated to a Super T-10 4-speed transmission.

“We usually do big blocks,” he said. “We went with a small block here, but I wanted to be a little radical so we built the stroker instead. The motor mounts and oil pan are a matched set off a 1960s Chris Craft boat that had a stroker motor in it, so I lucked out. The hardest part, really, was getting those cross rams tuned right.”

According the Nervo Jr., the engine spits out nearly 600 horsepower, and the car drives awesome.

“A couple of weeks ago we were out driving, and he gives me that “let’s go” look,” he said, pointing to his father. “He drives an ’04 Z06, and he couldn’t catch me—and I never even dropped it out of fourth gear. You’ve got 600 horsepower in a package that weighs maybe 1,300 pounds soaking wet, and the car just floats!”

You have to catch the car sitting still to really notice some of its truly unique details, though.

The cowl vent? That came from a 1940s Chevrolet.

The headlights? Those likely came from a 1930s-era Lincoln.

Nervo Jr. even fashioned a chrome cover for his steering from the motor cover of one of those big industrial fans.

But the most unusual piece is the grille shell, which he found at an estate sale.

“I was at an estate sale and this was just hanging on the wall,” he said. “It’s from a 1926 Maxwell steam-powered car, and I paid $20 for it. This old timer came up to me later and almost whooped my a$$ because I cut it up. He told me the Maxwell was almost as rare as a Duesenberg and offered me 500 bucks for the shell—after I cut it up!”

The bargains didn’t stop there for Nervo Jr.

“My buddy did all the pinstriping for a case of beer!”

And that’s how hot rods—even ones picked from trees—get done.