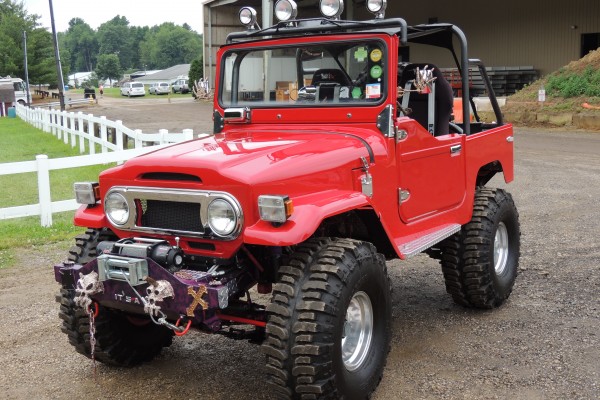 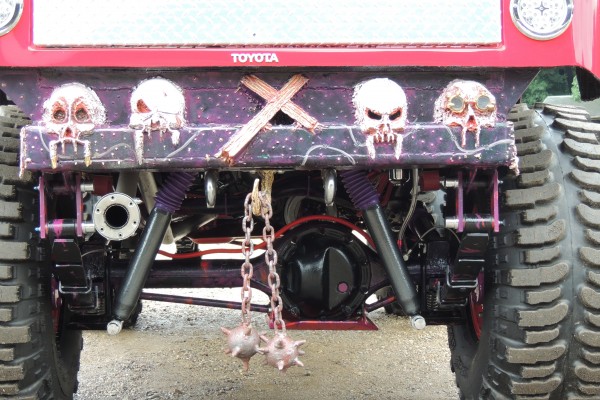 The first thing you notice are the skulls.

Joe Sell knows not everyone will understand. And he’s okay with that. Because some people will.

Sell, 55, is an artist. A sculptor. A painter. And this 1977 Toyota Land Cruiser is his gallery. It’s frame, his canvas.

Before Sell began customizing vehicles, he developed a passion for painting oil on canvas as a teenager.

Before Sell began painting, he accompanied his father—a high-pressure welder for Bethlehem Steel—throughout his boyhood years to various job sites where he would watch his father make metal do what he wanted.

Before Sell learned about welding and metal fabrication, he fell in love with cinema—namely the science-fiction and horror genres. He loves Godzilla. Dracula. Conan the Barbarian. And that passion for cinema has been passed on to his two sons.

His fully restored and customized Land Cruiser represents a mashup of all these influences and loves in Sell’s life.

The result is a vehicle that—over and over again—stopped people in their tracks at Super Summit 2014, Summit Racing Equipment’s two-day car show, including monster truck car crushing and freestyle motocross stunt shows, held at the Summit County Fairgrounds in Tallmadge, OH, June 20-21.

Most people think it’s a Jeep because the ’77 Land Cruiser is a such a rare find these days.

Sell, who lives in Hollsopple (also known as Benson), PA, bought the vehicle in September 2000. He spent the first few years modifying the frame, upgrading the suspension and restoring the body. He added Chevy power-steering components to help with maneuverability.

But Sell respects its roots.

Then one day, his buddy Rick—the guy who found the vehicle for him, and used to attend many truck shows with him—asked: “Why don’t you do skulls?”

It takes a minute to digest what you’re looking at. After more than a decade of artistic modifications, the little touches are everywhere.

Skulls. All over. And each one unique.

“I won’t do anything twice,” he said.

Fine details that celebrate Sell’s enthusiasm for doing something no one else is doing.

“I see tube frames. I see painted frames. I see stainless steel frames. But I’ve never seen that,” Sell said, pointing to the back end, sturdied by a four-inch square steel bar featuring four uniquely designed skulls. The third from the left is the first skull he ever made for the vehicle.

Sell crafts all of the vehicle’s artistic features by hand using scrap metal from an old lawn and garden equipment manufacturing company where Sell once worked. He used mostly dowel rods and scrap sheet metal, he said.

“I used to check the scrap barrels every day to see if there was something I could use,” he said.

Sell spends months and months fabricating new pieces for his traveling art exhibit, welding and painting metal—using old welding tricks his father taught him a lifetime ago, and painting whatever’s in his mind’s eye.

The result is something constantly evolving. A canvas that will never be complete, Sell said.

“I can’t just stop. There’s maintenance, too. I might have to repaint the motor block one day. Maybe one winter, I’ll redo the frame,” he said. “There is always going to be something different. It has to be fresh.”

The entire project is rooted in family.

Sell and his wife of more than three decades have two thirty-something sons, Mike and Joe Jr. The younger Joe has put a couple of his own artistic touches on the Land Cruiser.

Sell said his wife Cindy is the primary reason the Land Cruiser has been able to evolve as it has. She supports all his time in the garage and accompanies him to many of the shows he attends.

“None of this can be done without my wife,” he said.

The vehicle will never be finished. And that suits Sell just fine as he’s always cooking up new ideas.

There is joy in the act of creating something.

And the reward lies in all of the appreciative looks and comments from people who see Sell’s work.

“I’ve had people come to my garage just because they heard about it,” he said. “And they’re all welcome.”

What’s the point of all this? What motivates?

“When people come and see it, and how they like it,” he said. “Maybe that will inspire somebody to do something.”

A father was holding his young son’s hand as they walked around the vehicle, admiring its detail.

“That’s a nice car, sir,” the father said to Sell.