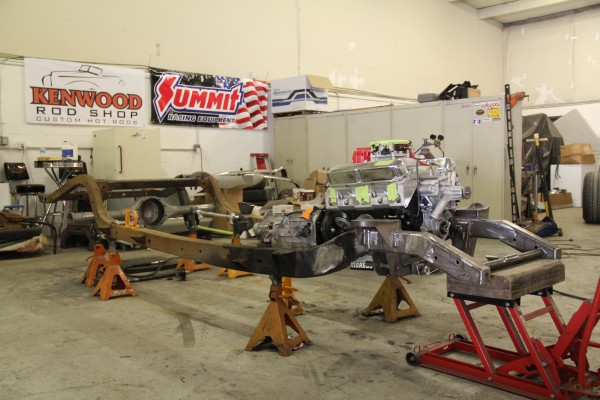 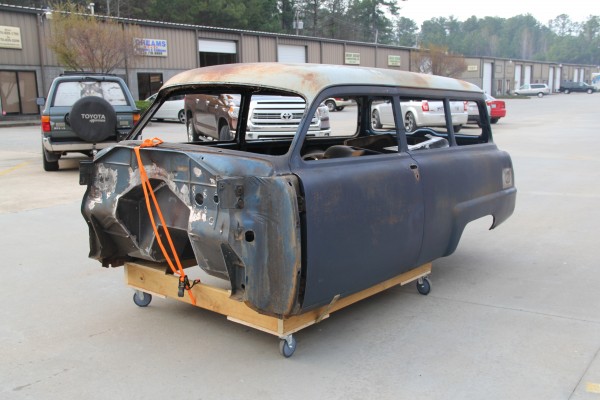 One 1953 Plymouth Suburban body, ready for a trip to the sandblaster. All of the front end sheetmetal is sitting inside the car—another reason station wagons are so darn useful.

Brian’s Paint and Body took the Plymouth down to bare metal using baking soda as the blasting medium. Baking soda is very effective at removing paint and surface rust, but doesn’t pit or distort metal like sand, walnut shells, and more aggressive blasting media can. Part of the roof still needs a dose of bicarb.

One disadvantage of baking soda is it gets everywhere. It can be washed away with water and compressed air, but you have to take the time to flush it out from all the nooks and crannies. If you don’t, there is a good possibility the soda can become airborne during the painting stage and ruin the paint job.

Brian Trevena, co-owner of Brian’s Paint and Body, shows Rutledge Wood how smooth soda blasting leaves the sheetmetal’s surface. Johnnie Ferrell of Brian’s did the actual blasting work. And no, one does not wear shorts in the blasting booth; you can see the rest of the protective gear on the table behind Brian.

If we were clever types, we would have a funny knock-knock joke for this photo. But we’re not, so you get to make up your own. The photo does show how clean soda blasting makes a car body, and how it reveals the trouble spots that will have to be addressed.

Back at Kenwood Rod Shop, the gang was hard at work on the Plymouth’s chassis. The Heidt’s 9 inch Ford rear axle housing and four-bar suspension have been fitted. The rear axle housing will get 31-spline Strange axles and a Summit Racing third member case filled with Motive Gear 3.89 gears and a Detroit Locker posi.

These steel straps hold up the axle housing temporarily. A pair of AFCO Musclecar Series coil-over shocks will suspend the axle.

The BluePrint Engines 408 Chrysler is nestled comfortably in the chassis, suspended by a pair of Tin Man Fabrications engine mounts. If you’ve been wondering how BluePrint manages to extract 445 horsepower and 500 lbs.-ft. of torque out of 408 cubic inches, it’s not a big secret. Each engine is based on a seasoned 360 block that’s been sonic-checked, square- and parallel-decked, align-honed, and had the cylinders honed to within .0002 inch for straightness and roundness. BluePrint then fills the block with an all-new balanced rotating assembly and a 241/247 degree duration, .545 inch lift hydraulic flat tappet cam. Edelbrock Performer RPM aluminum heads, a FAST EZ-EFI fuel injection system, and a distributor top the short block. Each engine is then dyno-tested before it gets crated; BluePrint includes the dyno sheet so you can see exactly how much power your new 408 made. Want to hear the kicker? BluePrint covers all that horsepower with a 3 year/50,000 mile warranty.

Out back behind the BluePrint 408 is an American Powertrain/Tremec T-56 six-speed transmission. It’s connected to the engine with a QuickTime Mopar-to-Tremec conversion bellhousing. Kenwood Rod Shop will fabricate a custom transmission crossmember for the T-56. You get a good view of the Moroso transmission pan. It replaced the pan that came with the engine to gain some ground clearance.

This is what the Plymouth’s chassis looked like in about mid-March or so. We guarantee that it looks a lot more complete now—but you’ll have to wait for the next exciting installment to see what progress the Kenwood boys have made.

With an early June deadline to meet to make the Hot Rod Magazine Power Tour, Randy Allgood and his staff at Kenwood Rod Shop are going guns a-blazin’ on Rutledge Wood’s 1953 Plymouth Suburban wagon project. The Plymouth’s body was sent off to Brian’s Paint and Body in Fayetteville, GA to get 60 years of paint and grunge removed in preparation for bodywork and paint. What color, you ask? Since the car is—cough-cough—supposed to be Mrs. Rutledge’s cruiser, she picked out a Sherwin-Williams custom green that she calls Rutledge Wood Green. It will be a standard Sherwin-Williams color, so you can ask for it by name!

With the big hunk of sheetmetal out of the way, Allgood got after the chassis. The BluePrint Engines fuelie 408 small block Mopar is sitting on the Heidts front crossmember. The 9 inch Ford rear axle housing and Heidts four-bar suspension is mocked up, waiting for Allgood to determine their final resting places. And Rutledge is at the shop just about every day he’s in town, checking on the progress and making loud gear-shifting noises (we kid, of course).

While the Plymouth looks like a collection of model kit pieces right now, you’ll be amazed at how quickly things will progress from this point. As we speak, the body is close to paint-ready and the chassis is essentially complete. There is plenty of work left to do, but we fully expect to see Rutledge and the Plymouth rolling into Summit Racing Equipment Motorsports Park on June 10 as part of the Hot Rod Power Tour.

Take a look at the photos above to catch up with the progress on Rut’s Suburban. (He’s posting project updates like crazy on his Facebook page, so make sure to check that out, too.) And watch the video below for a preview of what’s in store next for the Plymouth.