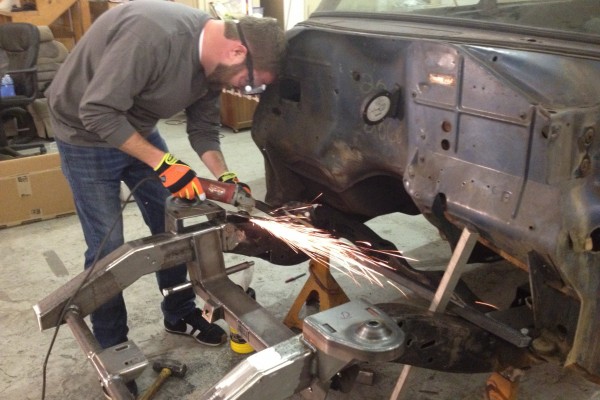 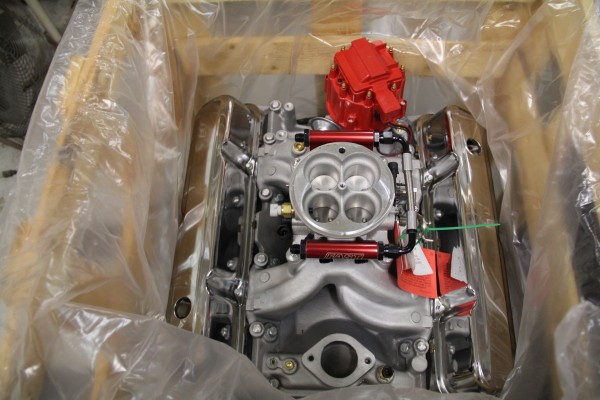 See, we told you Rutledge Wood works on his own stuff. That’s him grinding the welds on the new front frame stub Kenwood Rod Shop made for the ’53 Plymouth Suburban wagon. You can also see the crossmember and shock towers from the Heidt’s Mustang II front suspension kit are already welded in place.

The friendly deliveryman made it Christmas at Kenwood Rod Shop. One gift was a crate full of fuel injected, 408-cubic-inch Mopar goodness from BluePrint Engines. This fully assembled crate engine is based on a seasoned 360 block with a new cast crank, H-beam connecting rods, and 10:1 hypereutectic pistons. Add in a .545-inch lift flat tappet cam, aluminum cylinder heads, and a FAST EZ-EFI system and you get 445 horsepower and 500 ft.-lbs. of torque—covered by a 30 month/50,000 mile warranty, no less.

The Heidts front and rear suspensions probably took up a whole delivery truck. This box contains some of the parts for the parallel four-link rear suspension kit. The kits use one inch diameter stainless steel bars with ¾-inch adjusters and urethane bushings. You also get chassis mounting brackets, multi-position coil-over axle brackets, and hardware.

This crossmember, part of the Heidt’s front suspension kit, came in another box. Designed for street rods, the kit is as complete as they come—tubular upper and lower control arms, rack and pinion steering, 11-inch disc brakes, shocks, and all necessary bearings, seals, and hardware.

This plastic box is a mockup version of the evaporator core for a Vintage Air Gen-IV climate control system. It’s basically a shell with mounting brackets—invaluable when you’re trying to mock up a Vintage Air system in a non-traditional car like a Plymouth Suburban wagon. Vintage Air also makes mockup cores for its Gen-II Compact and Gen-II Mini systems.

This pile of greasy junk is the Suburban’s OE front suspension. Revised for the ’53 Plymouths, the suspension was praised at the time for a soft, comfortable ride, but handling was less than stellar. Those 10 inch front drum brakes would be hard-pressed to slow down 445 horsepower’s worth of small block Mopar, too. The Heidts front suspension package will take care of both handling and braking quite well.

The stock front frame stub was hacked off to make room for a proper rectangular tube frame that will accommodate the Heidts front crossmember.

Randy Allgood and his crew leveled the Plymouth and welded in the new front stub frame. The frame is made from 3 x 4-inch, 3/16-inch wall steel. “We normally use 2 x 4- inch tubing on our projects, but the Plymouth’s frame is beefy and the larger size tubing worked out better,” Allgood explained.

With the front sheetmetal mocked up on the new frame, Randy turned his attention to the bumpers. He removed the bumper guards and began the tedious process of grinding and smoothing the bumpers for replating.

For those who’ve arrived late to the wagon party, the Plymouth was given to Rutledge by NASCAR legend Richard Petty. The car will combine traditional hot rod style with modern mechanicals, including a fuel injected, 408-cubic-inch small block Chrysler, a T-56 six-speed transmission, a Mustang II front and four-link rear suspension, and a custom dual exhaust from Magnaflow. The wagon will make its debut on the Hot Rod Magazine Power Tour this coming June.

Kenwood Rod Shop, home for the Plymouth build, has had regular visits from the big brown truck over the past month or so. Here’s what’s arrived so far:

Randy Allgood and the Kenwood Rod Shop crew haven’t been sitting around waiting for stuff to arrive, though. They lopped off the front frame and engine crossmember. They fabricated a new frame stub from 3 x 4-inch tubing to accommodate the new Heidts front suspension. They mocked up sheetmetal and prepped bumpers. Busy, busy, busy, those fellas.

Our pal Rutledge pops down to Kenwood Rod Shop whenever he gets a chance to check on the progress, make some video updates to share with his fans, and yes, actually do some work on the car. We have pictures and everything.

Take a look at the photos (video coming soon) to see what’s happening with Rut’s Suburban. He’s posting project updates like crazy on his Facebook page, so make sure to check that out too.

And if you happen to be in the Atlanta, Georgia area April 26 or 27, stop by Atlanta Motor Speedway and check out the Summit Racing Equipment Atlanta Motorama. It promises to be one of biggest car shows in the Southeast, and Rutledge will be there on the 27th with his 1949 Chevy step van.