The barns of the world are filled with widowed project cars, forced into hiding once their owners—or the wives of their owners—got fed up.

This billboard-tailed Barracuda might have joined those barn-bound machines on several occasions, but it found the right owner, and, even more critically, the right owner’s wife.

“I almost sold it off a couple of times,” said Mark Hall, builder and owner of this 1972 Plymouth Barracuda. “I was the one who got frustrated with having it sitting around unfinished.”

“But I knew how much it meant to him,” adds his wife, Jen Hall. “And I stopped him from selling it.”

Growing up, Mark Hall and his brother Don loved cars, but their family didn’t have a lot of money, so they learned the fine art of trading labor.

“We’d do washing, waxing, polishing, detailing–anything just to hang out in garages and get our hands on some cool cars,” Mark Hall said.

Over the years, he honed his mechanical skills helping friends with projects, as well as building up a 1970 Dodge Challenger of his own. He had dreamed of owning a Pro Street Barracuda, but he felt like it was a car way out of the league of a humble school maintenance worker like himself. He even took a pocket full of cash to a Super Chevy Show in search of that perfect project, but left with his pockets still full.

Finally, he found a promising ad on the internet: a tubbed ’72 Barracuda with a 340, a broken grille, no bumper, and gritty paint. The ad had expired eight months ago, but the owner still had the car, and he was so happy to finally find a buyer he threw in the seized-up supercharger that once topped the 340 (it turned out the supercharger was an easy fix, and Hall was able to sell it later for a tidy sum that went right back into the car).

Building Hall’s dream Barracuda would take 12 years, during which he traded labor with friends, or took on side construction jobs to earn money for parts.

“I couldn’t have done it without friends like Brent Holste, Jeff Duncan, Andy Fenwick, Rod Milligan, and Jeff Bankemper. But my brother Don was the biggest help of all,” he said.

In addition to being a gearhead, Don Hall is also a bit of a hoarder.

“When I got the Barracuda, Don remembered that he happened to have a Hemi just sitting around,” Mark Hall said. “He just gave it to me. What a great brother!”

After an initial build-up rounded off a camshaft, Hall took the Hemi to Kammer & Kammer Enterprises in Dayton, OH to have it machined and properly set up. It now features a .030 overbore, ported and polished Mopar Performance heads, a BDS 6-71 supercharger, a Holley 750 Supercharger carb, an MSD ignition, TTI ceramic-coated headers, and much more.

Finally, after more than a decade in “body shop jail,” Mark began to test the waters in the Barracuda in late 2012.

Its debut show would be the Cincinnati Cavalcade of Customs in early 2013, so Mark tried to keep those 650 horses on a tight rein. However, while out on a test drive, he couldn’t resist a little fun leaving a stop light, and managed to tear up the rear end. Mark got the Barracuda back into shape just in time for the Cavalcade and took home a second place trophy!

For Mark, though, there was an even brighter highlight at the show.

“There was a kid there for his birthday, and he got the biggest thrill just sitting in my car. It really made me feel like all the hard work was worth it,” he said.

With its supercharged roar and bold billboard graphics, the Barracuda attracts friendly attention wherever Mark drives it.

“Sometimes, when I drive it to work, we end up with a bunch of people standing around in our parking lot,” he said. “I’ve also taken calls from friends who say they’ve heard me drive by, and I was like half a mile away.

“I’ve been thinking about adding a wheelie bar and a Pro Stock wing, but I’m not sure I can handle the extra attention, especially from the police.”

After a quick glance at Jen Hall, he adds, “or my wife.” 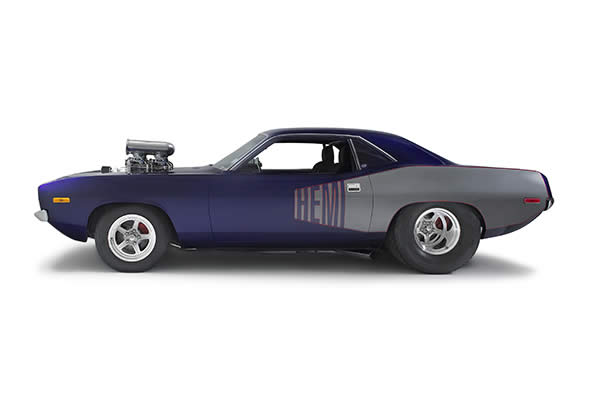 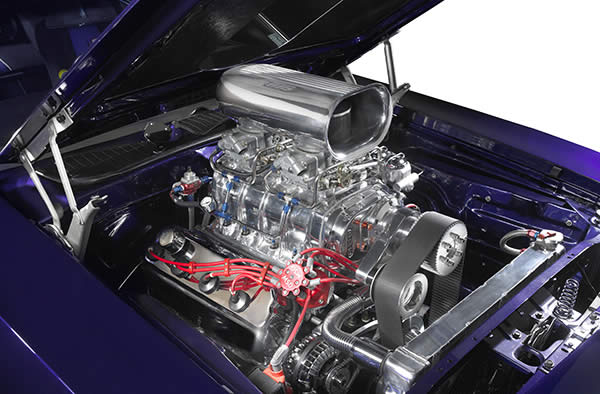 Mark and his friend Jeff Duncan spent a lot of time visiting the Barracuda in "body shop jail" to get everything just right. Replacing the broken grille turned into quite a drama, the fragile originals have become quite rare; Mark eventually drove all the way to New Jersey to pick one up. Once the body was perfected, Jeff applied the Purple Rhapsody paint, along with the charcoal billboard stripe. Then they brought in Bill Roell to take care of the orange pinstriping.

Mark's brother Don just happened to have a spare Hemi sitting around, so when Mark bought the Barracuda, Don just gave it to him to replace the stock 340. Mark has treated the free Hemi right, starting with a .030" overbore, then topping it with a 6-71 supercharger and manifold from BDS. It also sports an all-COMP Cams Valvetrain and Mopar Performance cylinder heads.

The inside of the Barracuda is coordinated with the outside, with tweed black, gray, and purple upholstery, black carpet, and orange piping-all courtesy of Scott Taylor at Taylor's Upholstery. It also sports Auto Meter Ultra Lite gauges, a billet steering wheel, and a Hurst Quarter Stick shifter for the factory Torqueflite 727. The crowning jewel of the interior is a custom-made dimensional Mopar emblem in the rear window package tray.

Just in case you forget what's sticking out of the hood in front of you, Mark had this stainless steel dash badge crafted to fit perfectly into the space where the original "Barracuda" badge went.

The Barracuda gets around on Billet Specialties Street Lite wheels, wrapped in Mickey Thompson Sportsman tires. Mark is thinking about adding a wing and wheelie bars to the back of the car--what do you think?

Special Thanks
My wife Jen, my daughter Jordan, and my sons Tyler and Ryan; my brother Don; and my friends Brent Holste, Jeff Duncan, Rod Milligan, Andy Fenwick, and Jeff Bankemper