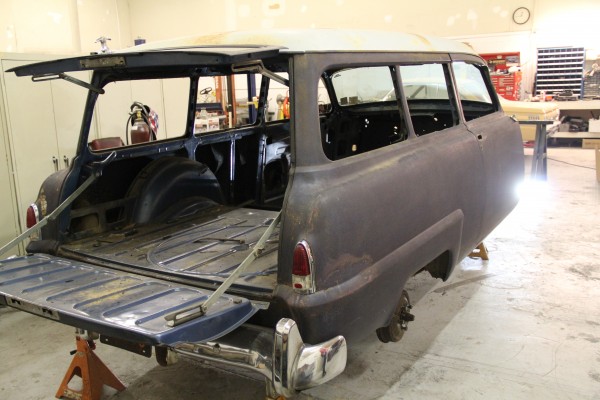 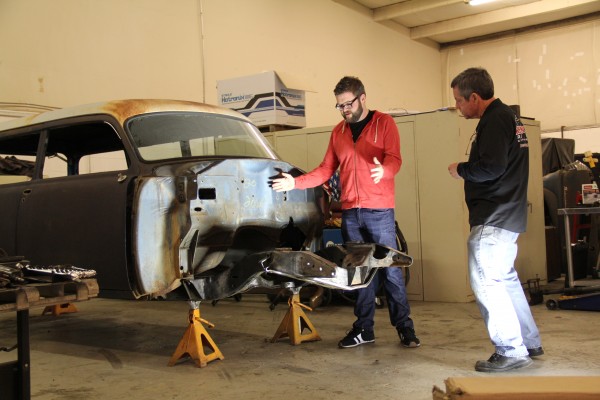 The patient awaits surgery. The stock rear axle will be replaced with a Heidt’s 9 inch Ford filled with Strange axle shafts, a Summit Racing gear case, a Detroit Locker Trutrac differential, and 3.89 gears from Motive Gear. That rear bumper will be getting a shave job as well.

“…and the motor will go right about here.” Rutledge Wood and Randy Allgood, owner of Kenwood Rod Shop, discussing how to fit 408 cubic inches of fuel injected small block Mopar where a flathead six used to live in Rutledge’s ’53 Plymouth wagon. The car’s suspension and front end sheetmetal have been removed in preparation for engine and Heidt’s suspension fitment.

The flathead’s replacement is this 408 cubic inch stroker crate small block from BluePrint Engines. This fuel injected Mopar makes 445 horsepower and 500 lbs.-ft. of torque. That’s plenty of power to get Rutledge and his family down to the local ice cream stand—or on a 1,500-mile road trip from, say, North Carolina to Wisconsin.

When the guys at Kenwood Rod Shop got the Plymouth apart, they discovered some rot in the floorboards and the front seat mounting platform, but overall the car was pretty solid as you can see.

Rutledge and his gauge panel. The panel is on its way to the gauge clinic at Classic Instruments for a rehab, including modern internals, a chrome bath for the housing, and an updated face.

As we explained in our first story on this project, the Plymouth was given to Rutledge by NASCAR legend Richard Petty. The car will combine traditional hot rod style with modern mechanicals, including a fuel injected, 408 cubic inch small block Chrysler, a T-56 six-speed transmission, a Mustang II front and four-link rear suspension, and a custom dual exhaust from Magnaflow.

“I am really happy to be a part of this project,” said Randy Allgood, owner of Kenwood Rod Shop. “Rutledge is a pretty wild guy, and with help from Summit Racing, I think we can make this car just as wild as he is. We’re going to make this car a modern street rod but keep the classic appeal of the family wagon.”

“I’m so excited to be doing another build with Summit Racing,” Rutledge added. “Randy Allgood is master builder, and when I saw some of the cars he had built, I knew I wanted to let him work his magic on my ’53. I’m glad we’re going Mopar with it—the BluePrint 408 stroker under the hood is going to be perfect!”

The project’s momentum has really picked up since our last update. Despite the bizarre winter weather in the South, the big brown truck has delivered a bunch of parts to Kenwood Rod Shop. The Suburban’s wheezy flathead six, three-speed transmission, front suspension and sheetmetal, glass, and interior have been removed in preparation for suspension and drivetrain surgery.

As you’ll see in the photos (above) and the video clip (below), the 60 year-old wagon was not as solid as Rutledge first thought. That means some sheetmetal replacement is on the horizon. Let us know how solid your bodywork is when you reach that age.

We also have confirmation that Rutledge will be bringing the Suburban and his nutso 1949 Chevy step van on this year’s Power Tour. Plans are to do the whole route from zMAX Dragway in Charlotte, North Carolina to Wisconsin Dells, Wisconsin—with a stop at Summit Racing Equipment Motorsports Park in Norwalk, OH. We’ll keep you updated on that.

Here is a list of the major components being used on the Suburban wagon: