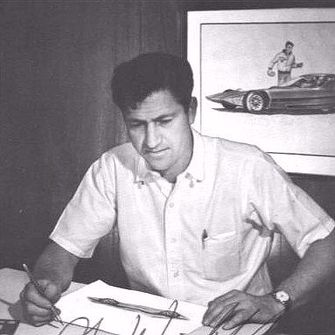 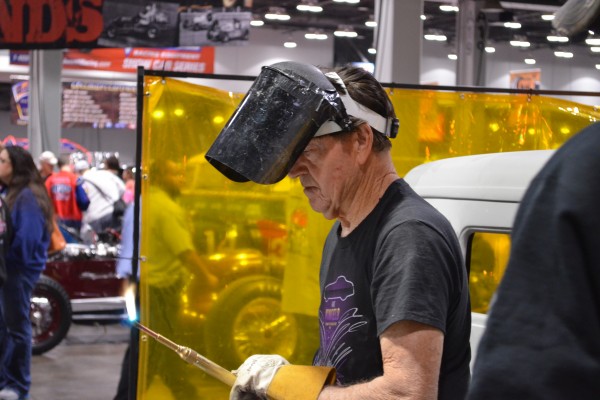 Winfield still enjoys teaching others the finer points of customization.

Gene Winfield has been customizing vehicles for longer than most of us have been alive. He has customized vehicles for many TV shows, movies, and commercials. Some of the shows and movies that have featured Winfield’s vehicles include Blade Runner, Robocop, Batman, Get Smart, and Star Trek.

While visiting the Cavalcade of Customs in Cincinnati, we got to hang out with the King of Kustoms. Winfield was showing off his car-chopping skills at the Genuine Hotrod Chop Shop, which is held at several of the Summit Racing Show Car Series indoor shows.

He took a break from fabricating to answer a few questions–questions like: What’s his favorite project of all time? How did his famous blended paint technique come about? What current rodding trends does he like?

OnAllCylinders: How many years have you been involved in hot rodding?

Gene Winfield: My first shop was in late ’46.

Winfield: I just painted a 1968 Mustang with a NASCAR motor that I am going to race at Bonneville. I have a Sprint car and I drive a midget car that I race in Lima, OH every year.

OAC: So you still have a passion for racing?

Winfield: I love it. I love the Sprint cars and midgets on the dirt track when you get them all crossed up. I love it.

During the interview, Gene took break to chat with a fan that stopped by.
He was telling us about how one of the Star Trek vehicles is still around and it is now at NASA.
He got to go to NASA and they gave him a 7 hour tour of the facilities. He was in awe.

OAC: What prompted you to start experimenting with blended paint schemes?

Winfield: I was doing a couple motorcycles and they had small tanks, and I just started blending and playing. I liked it. I liked what I saw and I said, “I can do this.” I decided to do a whole car so in 1957, I did a brand new Chevy with almost zero miles. I blended the car. At first I only blended around the chrome, and it was not a real custom. We knocked off the hood and truck emblems, but that was it. And we lowered it a little bit, too.

It was a white car, and I put purple around the chrome strips. When I got done, it was a little bit gaudy to me. It was different, though, and everybody loved it. So as I started to do the next one or two, I made it softer and started blending. And when I paint a car, I paint it until I like it. It doesn’t matter if it takes me two hours, three days, or two weeks–I paint until I like it. I don’t care if the customer likes it or not, but usually they do.

Winfield: There have only been two times, actually, in my life they didn’t like it. One was a lady and it was just too gaudy and too loud for her. The other was the same deal. This customer came to me, and I had painted four cars– brand new cars–in four years. And he brought me the fifth brand new car in the same year. He lived approximately 60 miles from me, so he would bring me a car with 74 or 80 miles on it. He would drive it one night up and down his street and bring it to me the next day. So anyways, he says to me “Gene, paint it wild. Do anything you want–any color, anything you want.”

So I did, and it was too wild.

It was too wild, so he said to change it. I never even pulled it out of the booth. I went ahead and softened it up, but I never got a picture of it. That was a big mistake. Later, for the next 10-15 years, he said he wished he would have left that paint job. It was shades of green and black. It was wild.

OAC: The white and the purple–you seem to see that a lot. Did you start that?

Winfield: Yeah. The most radical one I did was years ago, though. I painted it in ‘59 and premiered it in 1960, and it was called the Jade Idol. The Jade idol is still around in Dedham, MA. It’s for sale, and the owner wants 400,000 dollars for it. It was a very radical paint job with greens and black and different shades. Then I blended a little bit of soft gold powder just in a few places on the hood and trunk.

In 2009, I built the Jade Idol II. It’s a similar car–the headlights were almost identical–so we called it Jade Idol II. It had some damage and I just repainted it. It was rubbed out yesterday at my shop in California.

OAC: Of all the cars you have done, which is your favorite?

Winfield: The favorite of the old custom cars is the Jade Idol. And then the favorite of the aluminum cars–I built two aluminum cars in the 1960s, one in 1963 and one in 1965–is the Reactor. It was pretty futuristic at the time and is still futuristic today. It was on the Bewitched television show. They wrote an entire episode about this car on Bewitched. It was really cool. It was filmed in 1966 or ‘67.

OAC: You’ve worked on a lot of television shows and movies. Did you meet any cool celebrities?

Winfield: Yes, lots of them. Loren Greene of Bonanza, and of course all of his co-workers. In fact, I did a car for Michael Landon. I restored a car for him. And I met all the people from Bewitched, of course. I also met The Man from U.N.C.L.E.’s Stephanie Powers and all the different shows.

I didn’t get any of their autographs, and I realized later in life that I should have. And most of them are dead and gone. Now I try to get autographs from anybody that I meet. So it is a lot of fun.

OAC: As far as the hot rod scene, what is your favorite trend?

Winfield: I like the rat rods. Some of them are totally junk and some are well engineered. They are doing some unbelievable stuff to lower them. They are going lower than we ever did. And of course they create rust and primer and stuff–which is OK. We ran primer but with the idea of painting, and we eventually did paint our cars. They make ‘em rust and they are never going to paint them.

I like all phases of hot rodding. I like the real modern, the far out and wildest hot rod thing you can do, and the mild stuff, too. I like it all.

I have a hot rod that I started building many years ago. Someday I hope to finish it. I started building it with the idea of winning the open roadster show, called the America’s Most Beautiful Roadster–or AMBR cars. But those AMBR cars are like the Detroit Autorama Ridler. Now, all those cars have a million-plus, some of them 2-3 million dollars in them. They work on them for five, six, ten years–or whatever. This roadster–I started it 25-30 years ago, and I still have it. As I was building it, my ideas would start changing. Each year I would get new ideas and each year I would upgrade it and change it. So it’s still not finished, and I haven’t touched it in a few years.

And of course I keep building a car every couple of years for myself. I started to build a ‘58 Pontiac. A ‘58 Pontiac like a Bonneville is pretty scarce, and a restored Bonneville goes for a lot of money. I finally found one and bought it. I was getting ready to start it and a guy brought me an Econoline pickup that he knew I wanted to build again, like I did for Ford in ‘62 or ’63. OAC: Was that the Pacifica?

Winfield: Yes, the Pacifica. So I built the Pacifica for Ford, and it was in the Ford Custom Car Caravan. So I knew it ended up in Detroit. In fact, AMT sold it to Troy Ruttman, the Indianapolis driver, and they used it for a parts truck in Dearborn. I ran ads in the paper and everything trying to find it. I got a hold of Troy’s brother, who is now in Florida, and he didn’t know what happened to it.

So this guy brought me this car and gave it to me for my birthday–no engine or transmission but a nice body. I went ahead and jumped on it, and in a year and a half, I built the Pacifica. So I have that at home now, and it’s all finished and runs good and everything.

My Pontiac is still sitting there.

OAC:  What do you do in your spare time? You turned your hobby into work. Do you have any other hobbies?

OAC: Do you still enjoy teaching and instructing?

Winfield: I love it. I do metalworking constantly all over the place.

OAC: Do you have a favorite place you’ve visited?