From the chunky 33-inch Firestones and sky-high 5 1/2-inch suspension lift, to the flared fenders and reinforced chassis, everything about this trail truck makes a big first impression. And when you meet the man behind the mudders, you really begin to appreciate the family resemblance between Briscoe and Bronco.

As the owner of Liberty Collision Center in Hamilton, OH, buffing bumpers and fixing fenders is just part of the daily grind for Mark, but outside of the office he prefers bodywork of a different sort. In fact, it’s Briscoe’s past as a competitive body builder that exemplifies the Bronco’s transformation from scrawny to brawny.

“I knew it needed some work, but I didn’t think it would go this far,” Briscoe said. “Originally, I thought the Bronco would be one of those trucks where you’d just leave the doors off and pressure wash the interior when it got too dirty.”

Picked up from an old friend on a whim, a few months of driving revealed that Mark’s recently acquired Bronco had been ridden hard over the past 40 years.

“By the end of that first summer, it was stalling every time I drove it, and I was relying on a block of wood for my parking brake,” he said. “In the end, I decided that if I was going to keep driving it, it’d need some fixing up.”

With the Bronco stabled back at the shop, the early prognosis wasn’t positive: a trip to the sandblaster revealed that the sheetmetal consisted mostly of rust held together with body filler. However, that made the process of deciding what’s scrap and what’s salvageable pretty straightforward for Briscoe’s lead tech, Shannon Curley.

“At first we thought the build would take about a month, but the further in we got, the worse it looked,” Curley said.

And by the time they picked the Bronco’s frame clean, only the driveline, transfer case shift lever, glove box, and ashtray were saved from the scrapper. However, before Briscoe and Curley began building it back up, they took the extra steps to ensure that the rust was gone for good.

“Anywhere we found corrosion, we tried to identify the cause and fix the problem,” Curley said. “We made new, heavy-duty body mounts, reinforced the welds in high-stress areas, replaced every piece of hardware with stainless steel, and sprayed the undercarriage with truck bed liner to keep the moisture out.”

With the chassis sorted, the Bronco was jacked up 5 1/2 inches courtesy of a James Duff Monster Suspension System. This kit not only provided some serious ground clearance and additional structural support, but also helped dictate the final paint scheme—the suspension system’s bright blue powdercoat finish was precisely matched using a custom PPG mix.

But before hitting the paint booth, Curley seized a rare opportunity to make some alterations to the Bronco’s all-new body panels; welding up the multi-piece rear quarters and trimming the wheel arches to flow perfectly with the burly bolt-on fender flares. And underneath those muscular haunches, a set of 15 x 8 American Racing ATX Series AX186 wheels wrapped in 33-inch Firestone Destination M/T tires add even more height to the Bronco’s towering stance.

Inside, Briscoe kept the interior upgrades simple with a pair of Corbeau bucket seats and 4-point harnesses, plus a Dakota Digital VHX gauge system behind the Lecarra Mark 4 Elegante steering wheel. Overhead, a stout 2-inch diameter, 8-point roll cage ensures many happy returns, should the Bronco ever take a tumble. And because nothing is ever easy when you’re talking about bulking up a 40-year-old off-roader, the glove box had to be moved inboard approximately 6 inches to clear the cage.

Come face-to-face with the Bronco and you’ll find a custom shaker scoop setup staring back at you through the specially modified hood. Originally perched atop a 1971 Ford Torino’s 351 Cleveland engine, this one-of-a-kind modification now gulps in the air for the Bronco’s original 302 small block. And to make the most of that extra airflow, Briscoe bolted on an Edelbrock Perfomer intake manifold and 650 cfm carb, plus a Sealed Power hydraulic flat tappet cam for some extra low-end grunt.

For a body style known by many as the “small” Bronco, it’s clear that Briscoe never got the memo. For him and Curley, transforming this tired old horse into a ground-pounding Clydesdale required equal parts ingenuity and brute force, resulting in a no-compromise 4×4 that’s at home crawling over boulders or running the show circuit.

And what’s up next for the Bronco builders? It’s back to the shop for as many reps as they can muscle—pumped and ready to add more to the stable; first a beach-going version for Briscoe’s wife, then getting down to business creating buffed up Broncos for customers at the shop! 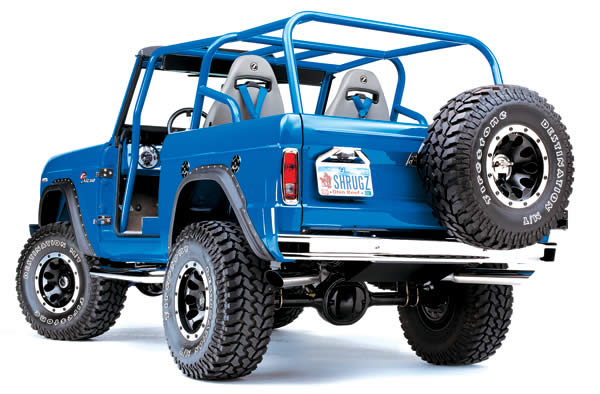 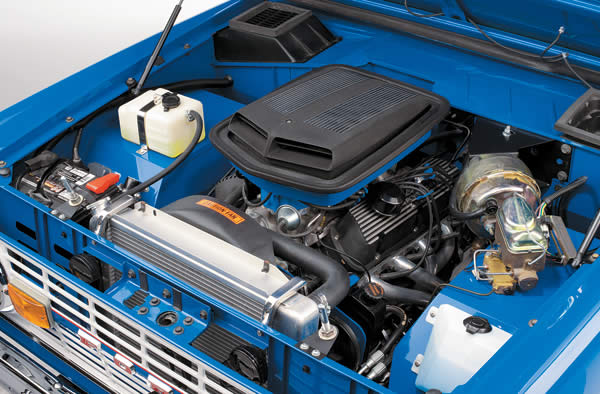 While the Bronco originally rolled off the factory floor with an orange paint job (Ford called it “Calypso Coral” back in 1969), Briscoe opted for a custom PPG mix to precisely match the blue powdercoat finish of the Bronco’s new James Duff Monster Lift kit. The true-blue look continues overhead onto the beefy 8-point roll cage.

Producing a modest 200 horsepower back in 1969, the Bronco’s 302 was given some impressive performance upgrades to help turn those hefty 33-inch Firestones, most notably, the custom shaker scoop setup. Extensive body work wizardry was required to maintain the structure of the hood, in spite of the skylight cut into the sheetmetal.

No satellite navigation here, but the Bronco’s 360-degree visibility is all you need to find your way. Inside, a pair of Corbeau Moab buckets hold on tight (especially helpful with the doors removed), while you lead the way via the LeCarra Mark 4 Elegante steering wheel.

The Bronco has always been loved for its off-road capabilities and unmistakable toughness, but Briscoe took that to the next level. Between the gnarly off-road tires, extensive chassis reinforcement, and towering James Duff long-travel suspension kit, this Bronco is equipped to tackle any terrain.

While off-road toughness was certainly a top priority for Briscoe, this Bronco is no slouch in the looks department, either. A pair of motorcycle headlight buckets were swapped in for the Bronco’s original beams, and to keep the two-wheeled theme going, the fuel filler caps come straight out of the chopper parts department, too.

A trip to the sandblaster revealed that this 40-year-old off-roader was more body filler than original Bronco, so every panel was swapped for brand new sheetmetal. But don’t let the pristine body work fool you; this Bronco is no pampered show pony. Briscoe and his son Beau spent the night before this photo shoot scrubbing those massive tires and scooping mud out of the wheelwells.

Special Thanks “Shannon Curley, Beau Briscoe, Steve Swartz, John Harding, and—of course—my wife, who I love with all my heart!”