Ever heard of the 17-year cicada? It’s a nasty grasshopper-type bug that explodes out of the ground by the zillions every 17 years to consume all the plants on Earth and cover the ground with their short-lived carcasses. Blech.

Ever hear of the 17-year Camaro? Mike Norica has one. His 1967 Camaro RS spent all those years in a garage before Mike and his son Michael brought it back to consume as much asphalt as it could lay its Mickey Thompsons on.

Mike, who is the sales manager at RAM Clutches, has owned the RS since 1978. We’ll let him give you the backstory:

“This car was purchased in 1978 during my junior year in high school,” he explained to us. “Investigation into the serial numbers showed it was a true Rally Sport. For $1,200, I got a clean body with 34K miles, a Muncie M21 four-speed, a Dana 60 rear end, and a 327 with the water jackets blown out of both sides of the block! I believe the only tools the previous owner used to work on this car were a sledgehammer and a torch.”

“I replaced the engine with a fairly radical 350 and drove the car that way for about a year. One evening while setting the valves, I noticed a stream of oil coming out of the exhaust and down towards the garage door behind us—we had blown out all the valve seals on one side with some spirited driving the night before. I replaced that engine with an original LT-1 350 from a 1970 Corvette.”

“Around the same time, a friend and I stripped the car down and repainted it Corvette dark red with silver-blue flames coming off the front rally stripe. Being a typical 17 year old, I didn’t do all that great a job, but it was good enough to be featured in Chevy Power Magazine around 1980.”

Mike took the Camaro along when he moved to South Carolina in 1984. With his job eating up a lot of his time (he was assisting several Top Sportsman teams with clutches and nitrous systems) the car sat until 1993 when Mike got the idea to turn the Camaro into a Pro Streeter. He had Stroupe Race Cars in Kings Mountain, North Carolina backhalf the car and build a 12-point roll cage. Then came the 17-year hibernation.

“About this same time our kids came along, so the car sat in the garage just as Stroupe Race Cars finished it,” Mike said. “In late 2010 my son began to show interest in reviving the project. We shipped the Camaro to Color by Weasel in Lugoff, South Carolina to repair the body and paint it. We then completely rebuilt the car to its current state. We wanted to do ‘modern Pro Street’ and match the standards of today’s race cars. I call it ProMod Street.” 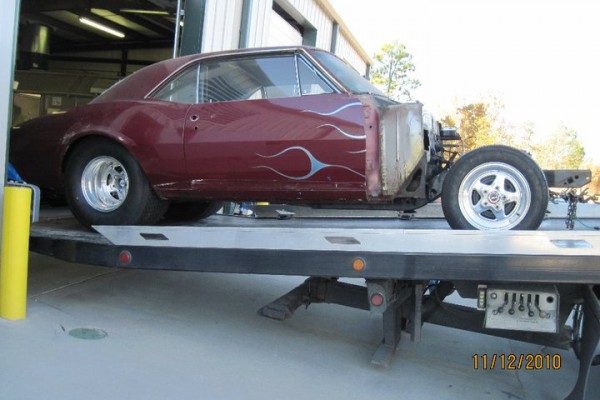 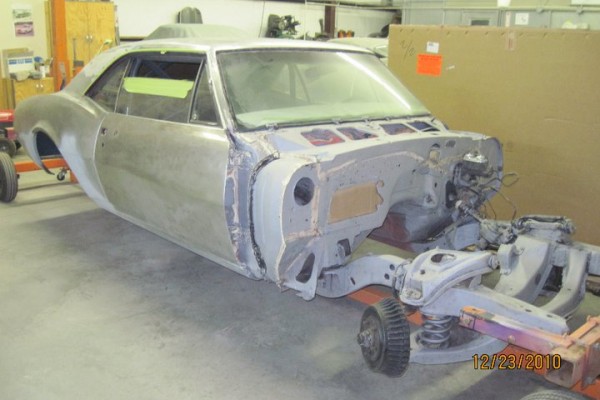 Mike Norcia has owned this 1967 Camaro Rally Sport since he was a teenager terrorizing the streets of Canton, Ohio in the late 1970s. The four-speed car got two engines in the span of a few years (a rebuilt 350 that blew out its valve seals after a night of hard racing, then an LT-1 out of a ’70 Corvette). Mike and his buddy applied the dark red with silver flame paint job you see here. Mike had the car back halved by Stroupe Race Cars in the 1990s, only to let it sit unloved in the garage until his son Michael got Mike to redo the car in 2010. Here, the Camaro is going into Color by Weasel’s shop for bodywork and paint.

One RS Camaro, stripped to bare metal and ready for bodywork. And yes, Mike drove it like a loon on four-wheel drum brakes.

For being from the Rust Belt, the Camaro didn’t need much in the way of sheetmetal repair. Patches behind the rear wheels (a common rust-out area) were needed on both sides.

With the sheetmetal repairs complete, the car was put in epoxy primer. Mr. Weasel then smoothed out the firewall and fabricated a sheetmetal panel to cover the area where the heater box used to be.

The Camaro was shot with primer-sealer, then covered with House of Kolor Euro Red basecoat/clearcoat paint.

The hood and rear deck rally stripes were done in House of Kolor Sunrise Pearl. That’s Weasel himself (aka Mike Johnson) wet-sanding the paint.

The rear suspension was also slathered in Euro Red paint. The suspension is the handiwork of Stroupe Race Cars (Kings Mountain, North Carolina)—a four-link with coil-overs holding up a narrowed Ford 9-inch rear axle with 4.10 gears and a Strange spool.

The Chevrolet Performance ZZ572 big block is lowered into its new home. The engine makes 620 horsepower and 650 lbs.-ft. of torque and comes with a forged steel crank and rods, rectangular port aluminum heads, a hydraulic roller cam (254/264 degrees duration @.050, .634 inch lift), and a single plane intake with an 850 cfm Demon Carburetion carburetor.

Here’s the Camaro as it came from Color by Weasel’s shop. There is still plenty of work to do—stuff like plumbing the engine, wiring, interior, and exterior trim.

The American Powertrain TKO 600 five-speed transmission is suspended with a crossmember from the Hurst Driveline Conversion Kit. The headers are Dynatech MuscleMAXX full length tubes with big 2 1/8-inch primary tubes.

The ignition system—MSD Digital 6AL box and Blaster SS coil—are mounted in the glovebox. The wires are Moroso Ultra 40 8.65mms.

The interior was covered with Summit Racing Hushmat Acoustic Mat to help cut down on road noise. The 12-point roll cage is part of the back-half job done by Stroupe Race Cars in 1994.

Mike took the rebuild as an opportunity to replace the wiring harness with an American Autowire Classic Update Series wiring harness. The 18-circuit harness has upgraded eight-gauge wire for the alternator, fusible link, gauge cluster, and battery disconnect, a pre-wired fuse panel with modern ATO fuses, and ignition, headlight, and dimmer switches.

The Auto Meter Elite Series gauges put on quite the light show. A tach, speedometer, oil pressure, water temperature, fuel level, and voltmeter gauges are housed in a custom-made panel.

The ZZ572 all buttoned up. It’s hooked to a TKO 600 with a RAM Force 10.5 dual-disc clutch and hydraulic throwout bearing. A Summit Racing aluminum radiator helps keep the big block running nice and cool.

Sharing space with the rear wheeltubs is an XS Power AGM battery, a Harwood 12-gallon fuel cell, and the bottle for the Speedtech 150 horsepower nitrous oxide system. So much for carrying a set of golf clubs.

This is the view that scares Mustangs and small children. The tires are Mickey Thompson Sportsman Radials on Billet Specialties Comp 5 wheels (15 x 3.5 front, 15 x 14 rear).

A Tremec TKO 600 five-speed transmission sends the 572’s power to a Ford 9-inch rear axle with 4.10 gears and a Strange spool. Naturally, that transmission has a RAM clutch—a Force 10.5 dual disc with a hydraulic throwout bearing.

For being an Ohio car, the Camaro was in stellar shape sheetmetal-wise. Color by Weasel stripped the car to bare metal and fixed some minor details. The only part replaced was the front header panel, and the fiberglass hood was swapped for a steel one. Mr. Weasel (aka Mike Johnson) also installed the aluminum rear wing and fitted a smooth firewall insert where the heater box used to live.

Once the bodywork was complete, the Camaro was painted House of Kolor Euro Red with House of Kolor Sunrise Pearl hood and deck stripes. Yeah, it’s bright.

Let’s see… there is an American Autowire Highway Series wiring harness; a Summit Racing aluminum radiator with a Flex-a-lite electric fan and shroud; an Aeromotive A1000 fuel pump and regulator; a Harwood 12 gallon fuel cell; and a Powermaster alternator and XS Power battery.

If you like Mike’s Camaro—and of course you do—you can duplicate his build with the aptly-named Pro Street 1967 Camaro Combos available at Summit Racing. You can build an exact copy of Mike’s ’67, or use the combos as a starting point to create your own vision of “ProMod Street.”