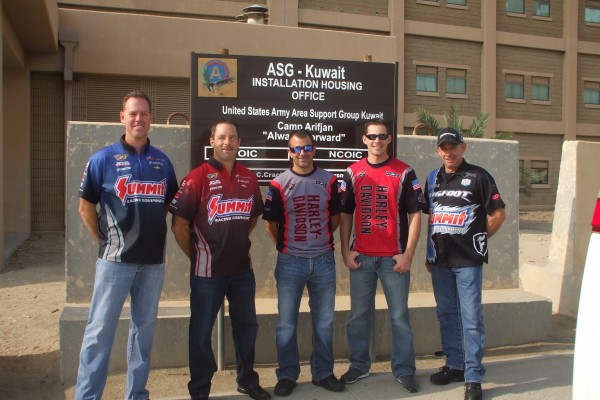 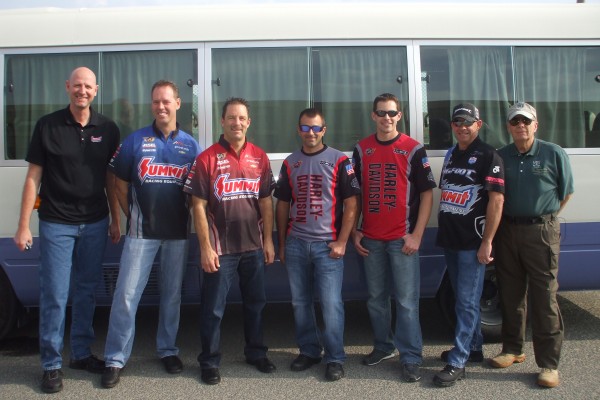 Tour members and Camp Arifjan leadership stand around the 3rd Army icon, which is set on one of the only patches of green grass on the base.

Tour members received a certificate of appreciation from the Area Support Group--Kuwait.

The team and their certificates poses with senior leadership at Camp Arifjan.

Andrew Hines, Dan Runte, and Jason Line sign autographs for the staff at Camp Arifjan before departing for the day.

The team poses for a photo with (from left) CMS Shawn Doane, Commander David Sanford, and Lt. Col. Thomas Ballard at Ali Al Salem air base in Kuwait.

Andrew Hines autographs a poster for a fan at Ali Al Salem.

Meet and greet at Ali Al Salem air base.

The drivers mingle with servicemen during the autograph session at Ali Al Salem air base.

Dan Runte takes a look inside one of the Medevac helicopters.

Greg Anderson with members of the 238th Medevac team.

The 238th Medevac team with members of Operation Appreciation at Camp Beuhring.

Greg Anderson climbs inside the cockpit of the Medevac helicopter.

The team watches race footage on a cell phone with a member of the U.S. Marine Corps.

The cast remains the same—Greg Anderson, Jason Line,  Andrew Hines, Eddie Kraweic, and Dan Runte once again make up the tour’s lineup—but this year’s trip takes place in the desert of the Middle East.

Well the group made it to Kuwait after the 12 hour plane ride. It will be fun @NHRA @harleydavidson @SummitRacing pic.twitter.com/hgqqZ6ae7x

While past tours have centered around Germany and other European stops, Operation Appreciation 2013 began with visits to two key American military bases in Kuwait: Ali Al Salem air base and Camp Beuhring, located near the Iraqi border. All told, the 2013 tour will include stops at multiple bases in three different countries in the Persian Gulf region. Summit Racing/BIGFOOT monster truck driver Dan Runte took time to reflect on his first day in the Middle East:

Coming over here to the Middle East, I have to admit—it worried me a little bit.

Once you’re here, I don’t think it’s that big of a deal. It’s just one of those things where we went to Germany two years in a row, and that’s the only place I had been as far as visiting the troops. Because this is closer to being in a war zone, this is a lot different than being in Germany. There are also a lot of differences between the cultures and everything else—the scenery, the landscape, the way people act. It’s a whole different deal.

It’s hard to explain, but I feel we’re appreciated even more for being here. And with that being said, if everyone in the United States had an opportunity to do this (visit active military personnel), I think this is the place where they should do it. Germany is a neat place to visit, and we have troops there that we care about very much, but this is right up front near where wars have been fought recently.

Today, being our first day, was just neat. What’s a guy to say but “wow!”?

You’re in Kuwait, and you’re visiting two major bases—the air base (Ali Al Salem air base) and the Army base (Camp Beuhring). And the people we met were just incredible. Great scheduling and great program—Armed Forces Entertainment did a phenomenal job. They kept us busy all day—incredibly busy. And that was the neat part of today. Every place we went to today sticks out in my mind as a great experience. We had the different scenery and the guys looking at different stuff—like Eddie (Kraweic) wanting to see a camel all day. And he finally got to see one! It’s that type of stuff that just adds to the memories.

I said it last year, and I’ll say it again this year—what a great group of guys to be with! You’ve got guys that really feel appreciation for the troops we visit with, and you can see that with every one of the guys that came with the group. Everybody cares about what they’re doing, and it’s heartfelt. That means a lot for me to be with a group of guys like that.

As far as what our military does and the sacrifices they make, I can’t say ‘thank you’ enough. They’re away from their home. They’re away from their families. Thanksgiving and Christmas are both coming up, and it pulls on your heart a little bit. And yet they’re smiling, and they love their job just like we love ours. And everyone just made you feel like they were glad you’re here, and they were willing to spend the whole day with you. For example, we visited the 238th Medevac, and those guys spent one-on-one time with us to show us the ins and outs of the helicopter and let us climb around in it. It’s not just like ‘you’re here—great; sign some autographs’ and then poof—they get you out of there. They really wanted to spend time with you, and we wanted to spend as much time with them as we could.

The whole experience was great, and each stop stands out in my mind.