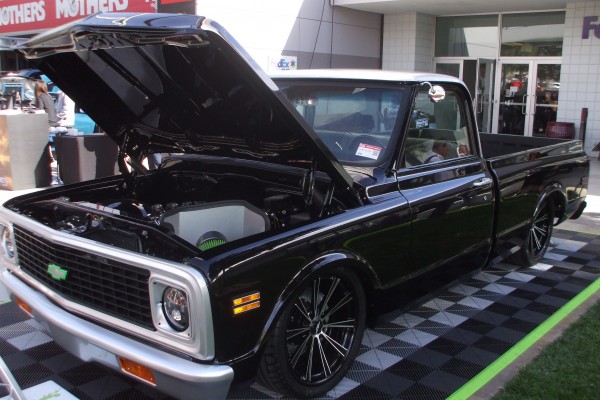 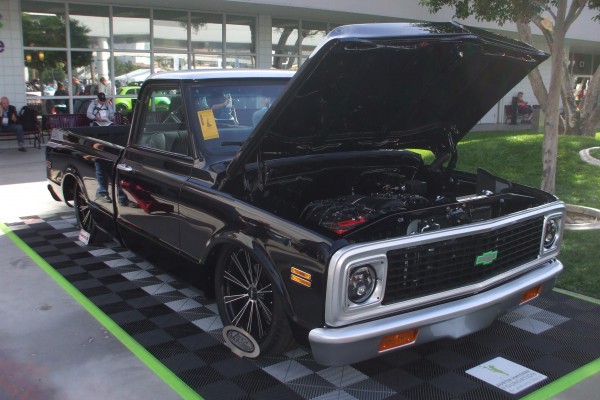 As we documented last week, there’s never a shortage of incredible, immaculate vehicles at the SEMA Show in Las Vegas. Some of those vehicles are built to help benefit good causes—extremely worthy causes like Wounded Warriors and new children’s hospitals. But very few of those vehicles have a story like Adel, this 1971 Chevrolet C-10 pickup which was unveiled at SEMA.

The truck started as a beat-up barn find purchased by Dr. Jim and Amy Jo Osborn of Chattanooga, TN in early 2013. But the story behind Adel truly begins long before then—way back in 2006.

That’s when the Osborns were hosting their annual charity event to raise money for kids with pediatric cancer. The couple had long championed the mission of helping kids with cancer and were excited to bring a new edition to the 2006 event—their good-natured, seven-week-old son named Austin Hatcher Osborn.

Just weeks later, pediatric cancer would touch the Osborn’s in a way they could have never imagined. Austin Hatcher, the Osborn’s seemingly healthy baby boy, was diagnosed with cancer and passed away just 11 days later.

Fortunately, the story doesn’t end there. The Osborns wouldn’t let it.

Determined to help children and families thrive during the cancer crisis and into survivorship, Jim and Amy Jo Osborn founded the Austin Hatcher Foundation for pediatric cancer. The foundation’s mission is to “erase the effects of pediatric cancer and optimize each child’s quality of life through essential specialized intervention beginning at the time of diagnosis and continuing throughout survivorship.”

Adel, the 1971 C-10 you see here, was transformed from barn find to showstopper to help benefit the Austin Hatcher Foundation. Purchased and partially funded by the Osborns, the truck was built by Chimera Customs in North Palm Harbor, FL. P.J. Davis, owner of Chimera Customs, says the shop was more than happy to take on the build.

“We take on special causes from time to time,” Davis said. “But as part of our criteria for getting involved, the payout for the project has to be good. What I mean by that is that some charities have 60 percent of the money raised go to admin costs. I don’t want to be associated with that. I want the money to make as much of a difference as possible.”

Although this isn’t Chimera Customs’ first build for a special cause, it was the first project that had a definitive deadline—SEMA 2013. With help from some generous donations from performance aftermarket heavyweights—Chevrolet Performance, Goodmark, Ridetech, Summit Racing, and many others—Davis and his crew were able to complete the truck for scheduled unveiling at the show.

“Motorsports and automobiles are in our DNA,”  said Mark Osmundson, Senior Director of Marketing and Sponsor Relationships for the Austin Hatcher Foundation. “And we’ve had a lot of people championing our cause.”

Adel features a Chevrolet Performance LS3 E-Rod “connect and cruise” powertrain with 4L65E transmission. The truck was completely disassembled and rebuilt with a Ridetech air suspension system and Goodmark body panels. A set of Baer Brakes four-wheel disc brakes provide the stopping power, and the C-10 sits atop a set of Grip Equipped alloy wheels. Inside, the rig is set up with a Vintage Air air conditioning system and a complete audio system from JL Audio.

Adel, which is Scandinavian for nobility, will be auctioned off at the Barrett-Jackson auction in Scottsdale, AZ in January.

Learn more at HatcherFoundation.org or see what other vehicles have helped the cause in Hatch’s Garage.