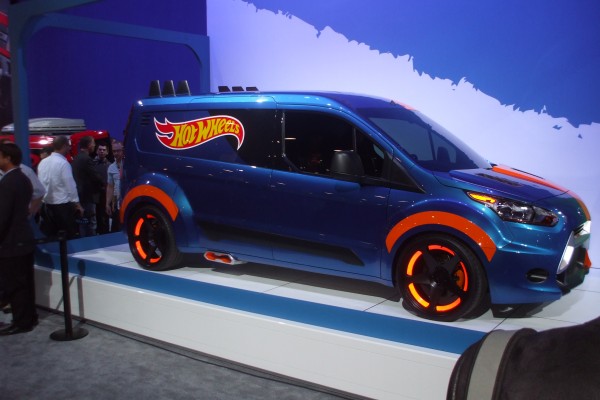 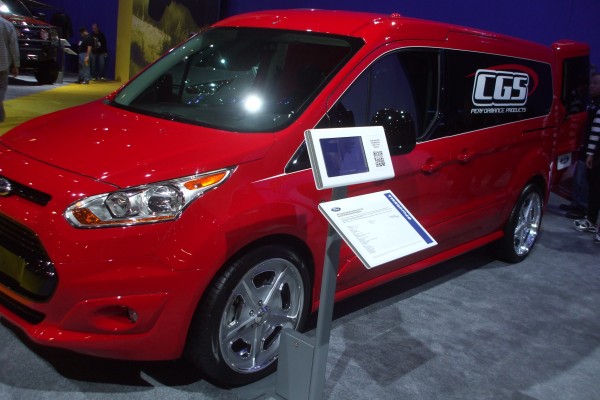 The Snakebit 1956 Ford F-100, which will be auctioned off to help build a children's hospital in Saskatoon, Canada.

This boat was part of the announcement with Indmar Marine Engines. It's equipped with a marine version of the Ford Raptor 6.2L.

Another of the Transit Connect concepts.

This 2014 Ford Mustang GT by Classic Design Concepts is called "Bad Penny" because of its copper accents.

The 2103 Ford F-350 Super Duty CrewCab "The Ultimate Eco-Considerate Expedition Vehicle" by EcoTrek. Powered by a 6.7L Powerstroke V8 turbo that can run on diesel, biodiesel, or algae-based biodiesel, it's equipped with a rooftop shelter, refrigerator, stove, and solar panels.

That was all the reason Ford needed to bring 10—count ’em—10 customized Transit Connects to the SEMA Show. These aren’t your Uncle Arno’s shag-carpeted 1970s van—or your creepy neighbor’s windowless van either. The Transit Connects are actually pretty sweet to look at, especially when tricked out with custom upgrades.

As part of the Vandemonium craze, as Ford has called it, Hot Wheels unveiled a pretty trick version of the Transit Connect that’s going to need some pretty big orange track. The gull-winged van sports a widebody kit, tool chest, bunk, and accommodations for all the Hot Wheels you got.

But enough about vans.

We like to talk about performance around here, so here are a few highlights from today’s press conference:

Gene Simmons Makes an Appearance for a Good Cause

Legendary KISS bassist and occasional front man hit the Ford stage to promote a Shelby-inspired 1956 F-100. The one-of-a-kind F-100, dubbed Snakebit, will be auctioned off at Barrett-Jackson in January. All proceeds will go toward the construction of a children’s hospital in Saskatoon, Saskatchewan, Canada.

Chip Ganassi Racing made the official announcement that it will switch to Ford’s 3.5L V6 EcoBoost racing engine for the 2014 TUDOR United SportsCar Championship (USCC). Scott Pruett and Memo Rojas will return to pilot the team’s Riley Daytona Prototype starting with January’s Rolex 24 At Daytona race.

“Our sport has evolved, and with heavier boats, bigger wakes and larger ballast and passenger capacity, the demand on the engine is even greater,” said Chuck Rowe, president of Indmar Marine Engines. “We looked at the total market, and have spent a great deal of time, research and development dollars to find an engine that will best fit the demands of watersports.”

Rowe joined the Ford festivities to make the announcement.

Click on the slide show for images from the Ford press conference.