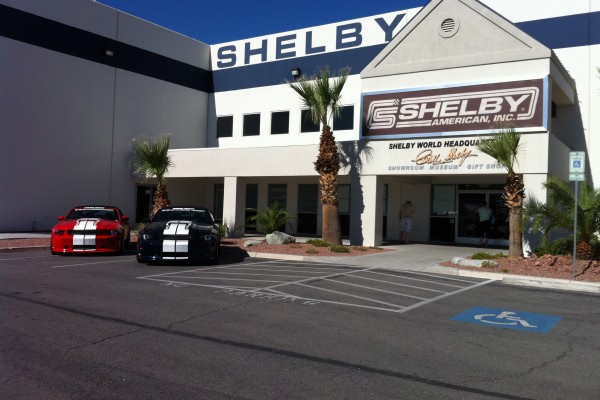 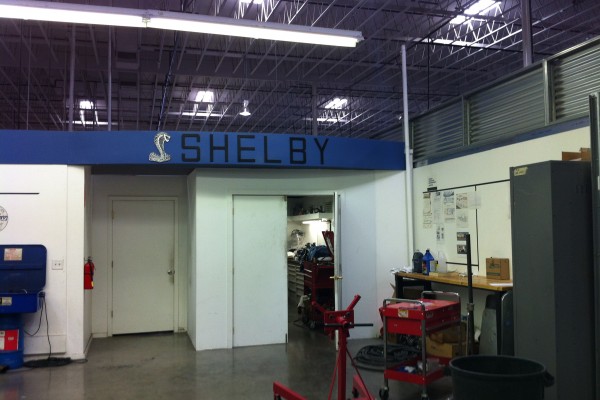 Outside the Shelby American headquarters.

View from underneath a customer car on a lift at the Shelby Speed Shop.

View from underneath a customer car on a lift at the Shelby Speed Shop.

A Ford Raptor in the process of getting its Shelby Package installed.

A Shelby 1000 Ford Mustang on a lift at the Shelby Speed Shop.

A Shelby 1000 Ford Mustang on a lift at the Shelby Speed Shop.

Shelby Ford Focus, AKA the “pocket rocket” as Carroll Shelby liked to call them.

Other Shelby vehicles on display in the Shelby American Museum.

Other Shelby vehicles on display in the Shelby American Museum.

The very first Shelby Cobra, CSX2000. Carroll Shelby was once offered 23 million dollars for this car, and he said no. This car was on magazine covers, and after each photo shoot, Carroll would take it to be painted a different color. By doing this, he fooled people into thinking he had more than one.

The “Rumor Car” (left) got its name because the totally chrome 427 Cobra is rumored to be built in the 90’s entirely of leftover 60’s parts, which is true. Carroll Shelby had it mirror finished. On the right is “33,” A CSX7000 series Shelby Cobra. It was originally built as a challenge car for racing. It has also been used as a test car, pace car, and track car by Shelby factory drivers.

Shelby Mustang GT350 on display outside the Shelby building.

Another view of the first Cobra.

A Shelby Cobra golf cart on display and for sale at the museum.

The name is legend in the auto industry. Shelby is well known for creating the famous Shelby Cobra, but he also had his hand in creating high-performance vehicles for Chrysler, General Motors, and of course, Ford. Shelby’s death at 89 in May 2012 devastated many in the auto industry, but his legacy lives on each day at Shelby American, a high-performance car company and division of Carroll Shelby International.

“At the end of the day, we’re all just car people and car enthusiasts,” said Gary Patterson, Vice President of Operations and Test Driver at Shelby American. “That’s what Carroll was.”

Shelby was funny. And you always knew exactly what was on his mind, Patterson said. The man didn’t have a filter.

We got a behind-the-scenes look at Shelby American’s “Speed Shop” where technicians install, upgrade, and complete final inspections on Shelby packages for customer vehicles.

We saw Ford Raptors. The Shelby American crew was preparing to install emissions-legal 575-horsepower packages in them.

We saw Mustangs. Lots of them. Gorgeous ones. Scheduled for power upgrades.

Don’t laugh. The Shelby upgrade on the Focus gives these compacts 300 horsepower—enough muscle to outduel some of the Mustangs at a recent Shelby Bash.

Shelby and Patterson were colleagues and close friends. Patterson spoke affectionately about how he often would pick up Carroll from the airport in his Corvette, just to “poke the bear” a little. Patterson’s daily commute is 100 miles round-trip. The Corvette is his daily driver.

Patterson is from Findlay, OH. He relocated to Las Vegas in 1990 and has been with Shelby American for 17 years. Hold your horses Ford Guy, the Corvette isn’t his only ride.

He’s got a 2007 Shelby Super Snake, a 2008 Shelby Code Red, a 1999 Shelby Series 1, and he still owns his first car. That car is a 1969 Mach 1 Mustang with a 428 CJ engine that he raced in high school. Patterson does some of the evaluation and development driving for Shelby American and also provides driving demonstrations at regional events.

The tour is about an hour long, and both entertaining and informative. You’ll leave smiling.

You’ll learn about the cars in the museum, all the company’s accomplishments, its current projects, and other fun facts. Like why the walls in the back manufacturing section of the building are covered in people’s signatures.

Thousands of them. Representing 15 years of passionate Shelby fans.

The story goes like this: The company moved into its current building in July 1998. People were asking for Carroll’s signature. So the Shelby team decided it would be cool if everyone who came to tour the factory left their autographs as well. So began the tradition of visitors signing their names and leaving messages for us to find years later.

Shelby officials plan to move from that building where the autograph tradition started 15 years ago. Patterson said there is no current plan for autographs in the new building. But something you can count on is that the spirit of innovation and looking ahead to the future to see what’s next will continue at Shelby.

The company is relocating from its location near the Las Vegas Motor Speedway to a new space on the Las Vegas Strip before the end of 2013. The move will start in November and the new location should be settled into and operational by December. Patterson says this change will help with efficiency by putting everything in the same building. The new facility will be more easily accessible to the public.

“If you asked Carroll what his favorite car was,” Patterson said, “he’d say ‘the next one.’”