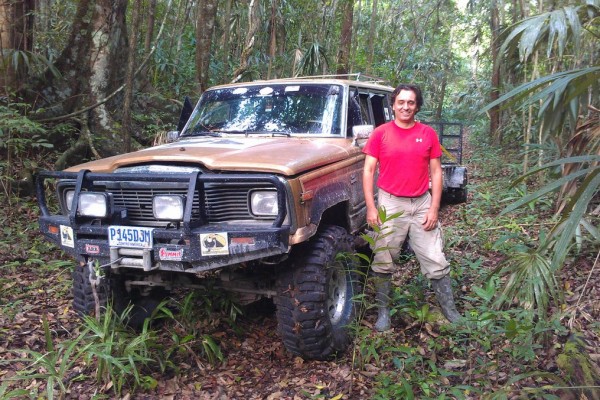 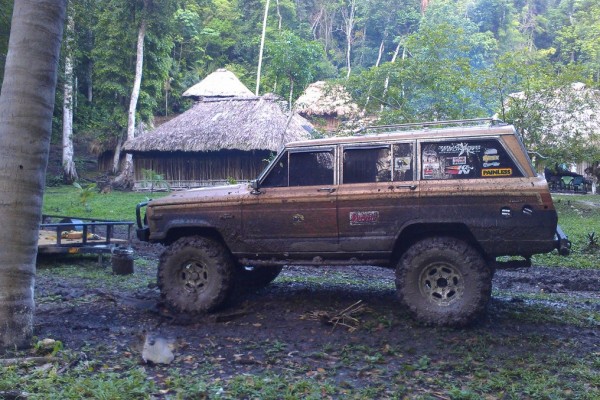 All the best archeologists have a signature tool of the trade. Indiana Jones has his whip, and Francisco Estrada-Belli has this 1985 Jeep Wagoneer. An expert on the Mayan civilization that flourished in parts of Mexico and Central America from 2000 B.C. to 900 A.D., Estrada-Belli has relied on the Wagoneer to get him to dig sites in the Guatemalan jungle—and back out again.

When you’re exploring in the jungle, you need to bring your own Department of Transportation to do any necessary road work. Roads in the rain forest are little more than mule trails hacked out of the brush. This one is better than most.

This is the Mayan frieze that Professor Estrada-Belli and his team discovered this past June. Hidden deep inside a pyramid in the ancient Mayan city of Holmul, the massive stone sculpture was reached via a 70 foot long tunnel dug long ago by looters. Measuring 26 feet long and 8 feet high, the frieze was commissioned by the ruler of the Snake Kingdom about 1,420 years ago. According to an inscription on the sculpture, it was part of a building used for worshiping Maya deities.

Think your garage is cramped? These poor guys in the Guatemalan shop that overhauled the Wagoneer have it worse. Despite the lack of American-style facilities, the mechanics did a bang-up job rebuilding the Wagoneer’s 360 and overhauling the Torqueflite 727 transmission. Like Mom always said, it’s not the tools that count, it’s the mechanic behind them.

It’s not every day that you get to help a real-life Indiana Jones.

Archeologist Francisco Estrada-Belli is one of the world’s leading authorities on the early Mayan civilization, which flourished in southern Mexico and northern Central America from 2000 B.C. to 900 A.D. This past June, he and a team of archaeologists made an important find when they unearthed a well-preserved stone frieze dating back to 600 A.D. in the Mayan city of Holmul, located in northern Guatemala. And they did it behind the wheel of a 1985 Jeep Grand Wagoneer rebuilt with components from your favorite parts emporium.

Outfitted with gear like a Rough Country four inch lift kit, ARB air lockers front and rear, 37 inch Super Swamper tires, and a Warn 9.5 Series winch, Estrada-Belli’s Grand Wagoneer had been a faithful pack mule on previous expeditions. As you might guess, the jungle is not a very hospitable place for a motor vehicle, and the Wagoneer was in need of a refresh before Estrada-Belli went on this year’s dig.

“We didn’t treat the poor truck very well,” he explained. “Most places we travel don’t have roads, and more often than not we had to drive in very rainy, muddy conditions with heavy loads. The (360-cubic-inch) engine was very tired after years of abuse, so we needed to have it rebuilt before the 2013 expedition.”

And if you think your garage is small and crowded, check out the photo of the shop in Guatemala where the Jeep was overhauled. Despite the less-than-ideal conditions, the local mechanics got the 360 humming and the Torqueflite shifting just fine.

Thanks to Latin American mechanical talent and some good old American hardware, Professor Estrada-Belli has his trusty trail vehicle back in service, ready to find more fabulous Mayan secrets hidden in the jungle.

National Geographic Magazine will be doing a feature story on Estrada-Belli’s expedition in a future issue. In the meantime, you can read about his recent find in these Interweb posts: