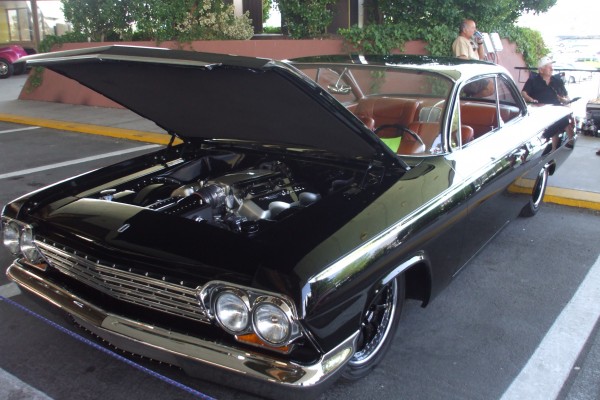 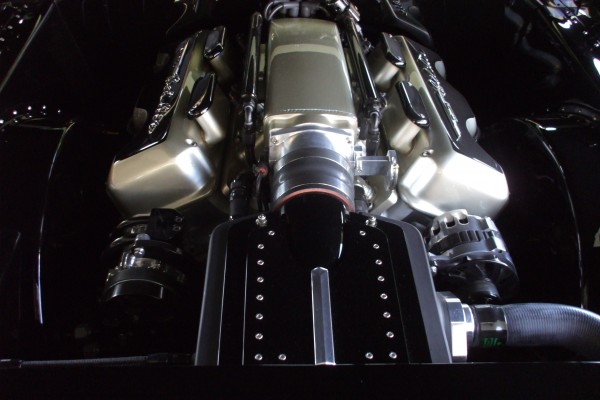 A custom intake tops the 409 engine and features a unique, riveted look.

A side view of the engine reveals those distinctive 348/409-style valve covers.

The air intake draws air through the front bumper.

Reno, NV. — James and Sandy Eudy’s finished 1962 Chevrolet Bel Air turned out just the way they drew it up.

Actually, it turned out just the way Eric Brockmeyer drew it up. James and his wife, Sandy, hired the well-known automotive artist to create a rendering of the completed Bel Air before work began on the project.

“I had an idea of what I wanted, and he put that vision on paper,” James Eudy said. “I wasn’t really sure of the color and some of the other details, but when I saw his rendering, I just loved it.”

The Eudys had a long way to go to achieve the final look in that rendering. They purchased the rust-free Bel Air body in Florida, but it had no chassis or engine. The Bakersfield, CA couple sent the car to Rods & Restos in Centre, AL. It received an Art Morrison chassis and some fantastic engineering that makes the car stand out from other Bubbletops. For example, the crossmembers were cut to allow the exhaust system to stay tucked neatly under the car. The bumpers ends were cut into the body, giving the Eudys Bel Air a more sleek appearance to complement that deep black paint.

“My favorite feature would have to be the engine compartment,” Sandy Eudy said.

Under the hood, the Bel Air packs a fuel-injected Chevrolet 409. The one-off fuel injection system feeds a set of Edelbrock heads, and a custom air intake brings fresh, cold air through the front bumper. The air intake is concealed by a mesh bumper inlay, which is repeated on the rear bumper to give the vehicle a consistent look from front to back.

“It’s just perfect,” James Eudy said. “The integrity of the car from front to rear—it all just works together.”

The Eudys have attended every Hot August Nights since the beginning, but the second looks garnered by their 1962 Bel Air makes the trip that much sweeter.

“Every day I wake up it’s like Christmas morning,” James Eudy said.