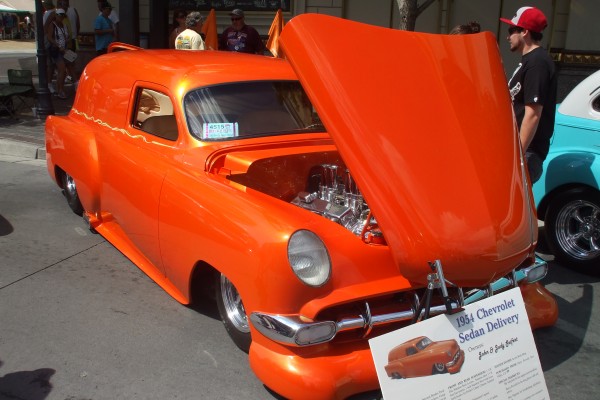 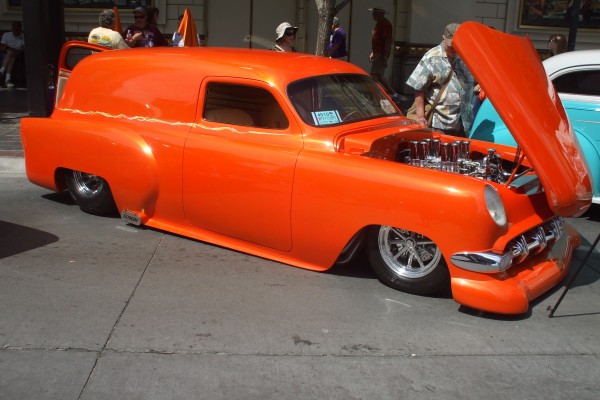 The exhaust tip covers says it all. John Seifert's Sedan Delivery includes some extreme modification and fabrication work. "The kids would always look at it and say, 'that's extreme.' So that's what we call it."

The pinstripe work was done by "Striper" Josh.

Notice the backup camera at the bottom of the wheel well

Reno, NV. — Plans can change quickly—especially when it comes to hot rodding.

Seifert originally bought the Chevy off his neighbor in 1991, but after going through a divorce, he had to sell the rusted old Delivery van back to his neighbor. His plans to turn it into a street rod were foiled—at least for a few years.

Seifert bought the vehicle a second time from his neighbor in 1996 and planned to build a typical street rod that he could take to shows and cruise-ins. Once he dove into the project, the plans once again changed and evolved into a complete one-off build that would take 17 years from start to finish.

“My wife always says there are a lot of holidays and vacations in the car,” said Seifert, who is now re-married. “There are only two original parts on here—the back window and the grille bar.”

Seifert spend two years block sanding the vehicle, and it spent seven years at Scott’s Hot Rods in Ventura, CA, where it received a new chassis. It also had its quarter-panels widened and got new Mercedes headlights. The top was chopped three inches, the A-post was rolled 1 3/4 inches, and the hood was sectioned three inches.

Did we mention this was Seifert’s first car build?

“I went to welding school to learn how to weld for this car,” Seifert said.

In addition to mating the fenders to the body to make one piece, Seifert bobbed the hood, created a custom tilt hood mechanism, and flared the rockers to work with the exhaust tip covers. He also raised the rear floor, crafted the roll pan, and lowered the front bumper.

The Sedan Delivery is powered by a Hilborn-injected Chevrolet 350 engine, which features Brodix Track I cylinder heads, a COMP Cams camshaft, roller rockers, and a variety of Summit Racing parts from the nearby Sparks store—valve covers, distributor, starter, electric fan, and fittings. A set of custom-built headers dumps the 350’s spent gases through those custom exhaust tips.

Seifert did the paint job himself, opting for PPG O SO Orange paint. Custom pinstripe work by “Striper” Josh brings an added element to the finish, and upholstery by Don Vigarino features inlays and stitching to match the pinstripe pattern.

Not too bad for Seifert’s first build. But what do you do for an encore?