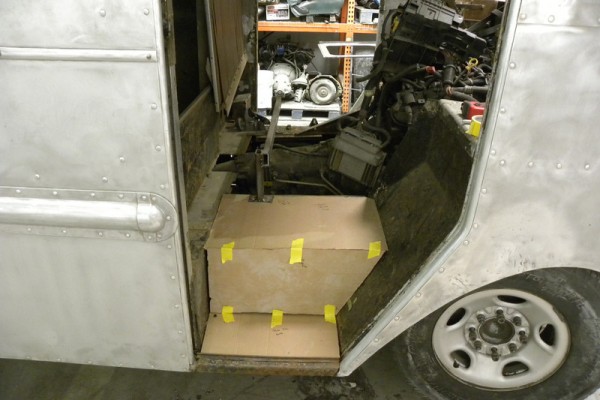 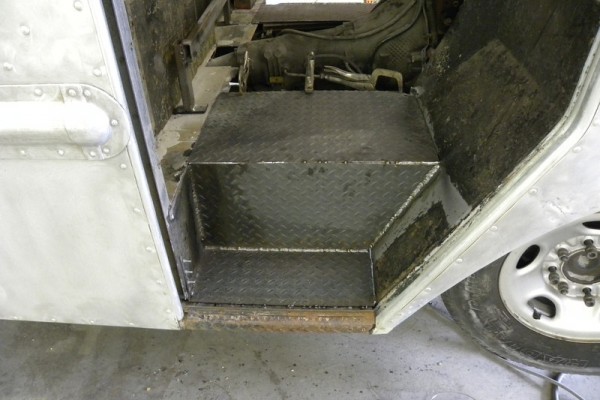 Most of the original cab floor had rotted away, so new floors were fabricated from 3/16-inch thick diamond plate steel sheet to duplicate the Chevy’s original floor. Here is the cardboard template for the step and passenger side floor…

and the new floor welded in. New diamond plate replaced the driver side step and floor, and was used to fabricate a removable transmission cover between the seats. Note the original piece of floor remaining in the door opening.

Lots going on here. The original dash (basically a glorified gauge panel) was ripped out and replaced with a frame of welded 1/8 x 1/8-inch aluminum angle covered by aluminum panels. The cardboard templates are for the front panels and the sides of the new engine doghouse. There’s also a cardboard mockup for Version One of the gauge panel. You can also see the ididit tilt steering column and the driver seat pirated from a Dodge Sprinter van.

The completed engine doghouse. You can see the finished passenger side front dash panel area as well.

…and fixed in place with these beefy square tubing steel supports. The Sprinter seats may not have fine Corinthian leather or six-way power memory, but they’re light-years more comfy than the sorry pieces of plank Chevy installed sixty-four years ago.

One reason the dash is so deep is the need to fit components like this Kugel Komponents power brake booster and master cylinder setup. American Resto Mods’ Joey Partee made the mount. Since the booster location is fixed, the seat had to be positioned so Rutledge could comfortably reach the brake pedal.

That box-looking thing attached to the end of the ididit steering column is a steering box from Wizard Fabrications. Designed for street rods and custom vehicles with limited space for a conventional steering box, the Steer Clear makes it possible to raise or drop the steering shaft, move it over, or change its angle, to increase clearance so you can fit just about any engine you choose. It fits 3/4 inch, 36-spline input and output shafts and works with commonly available U-joints and couplers.

A couple of things here. The most obvious are the 525 horsepower Chevrolet Performance Parts LS3 crate engine and Performance Automatic Street Smart 4L80E transmission being lowered into the chassis by American Resto Mods mechanic Dave Vinson. The LS3 has been kitted out with Summit Racing LS headers and a Vintage Air Front Runner accessory drive system that includes the A/C compressor, power steering pump, alternator, and an ATI harmonic damper.

The LS3 peeking out the front grille opening. This space will house a Be Cool cooling system and a Vintage Air A/C condenser. It will be covered with the van’s original grille bars—cleaned up and shiny, of course.

This mockup of the Be Cool system shows you how tight things are in the van’s engine room. The system is based on a Be Cool Direct Fit Cooling Module (radiator and dual electric fans) for a 1967-69 Camaro. Be Cool also supplied an engine oil cooler and a coolant catch can.

Under the dash on the passenger side of the van nestles the Vintage Air Gen-IV Magnum Climate Control System, the Smart Shift controller for the Performance Automatic StreetSmart 4L80E transmission, and the fuse panel box for the electrical system. The Gen-IV system is designed for large vehicles (which the van definitely qualifies as) and is electronically controlled—no cables or vacuum controls to mess with. The Smart Shift controller allows complete control over shift points, shift firmness, and torque converter lockup by using the dial adjusters on the box—no need for a laptop.

Rear seat passengers will enjoy the benefits of Vintage Air thanks to ductwork routed under the floor to a pair of vents between the front seats. According to Rutledge, a van full of folks was kept nice and cool during the Hot Rod Power Tour.

Here’s a good look at the almost-complete dash area of the van. That turbo-looking tubing is the ductwork for the Vintage Air climate control system; the controls are just to the right of the ididit steering column. Note how the top panels on the dash are removable for easy access to the various components housed within.

Can you guess what vehicle the gas tank is made for? Hint: it isn’t a Chevy step van. It’s actually a 22 gallon Scott Drake Reproductions tank for a 1970 Mustang. “The tank fit perfectly—all we needed to make was a pair of fuel tank straps to hold the thing up,” said American Resto Mod’s Mike Karbowski.

Here you can see the muffler from the MagnaFlow cat-back system sitting roughly amidships on the passenger side of the van. It’s hard to make out, but the exhaust pipes snake out of the muffler and over the frame rail to exit out the side of the van. That’s where all those mandrel bends came in handy.

The exhaust ends in this pair of MagnaFlow tips peeking out just before the rear passenger side wheel.

Finishing up the details in the back. The rear seat is also from a Dodge Sprinter van. It looks like the inside of a coffee can, but Rutledge says it isn’t nearly as ‘boomy’ inside as you would think. Insulation and a more comfy interior are on the docket.

Believe it or not, somebody does make new glass for a ’49 Chevy Kurbmaster. The windshield glass was cut by LC Appling at Vintage Glass in Lawrenceville, GA. The rounded side glass is from U.S. Armor (Lexington, MA).You can also see the refurbished grille bars, headlight assemblies, and sideview mirrors. The roof lights are fully functional.

One step van and the crew that spent untold hours creating it. “It wasn’t the normal build we get in the shop, but it was a lot of fun as well as a learning experience,” said Auto Resto Mod’s Mike Karbowski. And Rutledge? He’s ecstatic about his new toy box. “The first time you see a project completed, it’s an amazingly emotional moment,” he said in his blog. “Was this a good idea? Am I going to love it? But by the time I walked up to it and sat down, I was in love. It was everything I wanted it to be and more.”

When we introduced you to Top Gear on History co-host Rutledge Wood and his latest project, a 1949 Chevy Kurbmaster step van, we promised to bring you more updates on the world’s coolest motorized aluminum box.

Well, the build is done, and Rutledge has done his Power Tour gig (you can read his blog from the Hot Rod Tour on Hot Rod’s website. And as promised, we have more build highlights to share with you, courtesy of van creator American Resto Mods.

But that’s not all we have for you. Summit Racing has created Rutledge Wood Van Parts Combos for those who might be inclined to build their own version of the Chevy step van. And lest you think there isn’t anyone else, er, open-minded enough to build one, we have it on good authority that the head of Summit Racing’s Motorsports department has recently acquired a 1962 Olson Kurbside Dodge P400 dually van to hot rod.

If you want to see more of what American Resto Mods did to create the Rutledge Wood Van, head over to the American Resto Mods websiteand browse their photo gallery. Be warned—there are roughly eight zillion photos to go through, so budget your time accordingly.