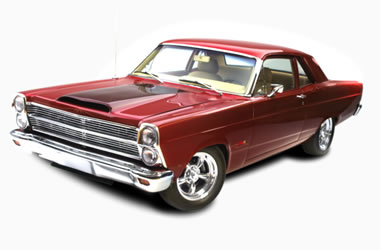 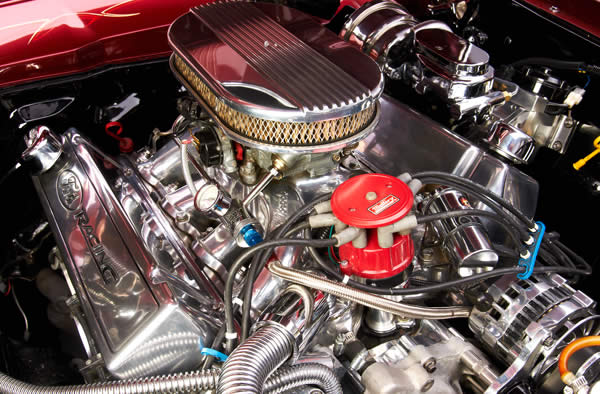 Stacked headlights and classic lines—what’s not to love? Bahnick relied on his years of experience with a body hammer and dolly to smooth the coupe’s sheetmetal to absolute perfection. “I don’t think I even used a quart of mud on this car,” Bahnick said.

Show meets plenty of go under the Fairlane’s fiberglass hood. The powerful 514 stroker engine is a gearhead’s dream, and it’s reliable, too. “I’d drive this car to Texas tomorrow, if I wanted to,” Bahnick said.

Heads up! Check out the embossed pinstripe design on the Ford’s headliner. It’s an awesome detail that’s easy to miss.

Guy Shivley used a steady hand and not much else to lay out some perfect pinstripes. “He didn’t even use a ruler,” Bahnick said.

It’s what’s up front that counts! The fully functional hood scoop feeds the engine plenty of power-building air and provides extra space for the Billet Specialties air cleaner. Bahnick filled the holes in the front bumper and then had it re-chromed.

The decision is in: Dick Bahnick’s 1966 Fairlane is a real knockout! But the ferocious Ford wasn’t always the car-show champ you see here.

It took Bahnick three rounds of knuckle-busting restoration to transform a down-and-out coupe into a heavyweight contender, ready to take on all challengers.

“It was a ’39 Olds coupe with bad shocks. Man, that thing would bounce 10 miles up and then 10 miles down,” Bahnick said.

Each successive project brought a unique set of challenges and also gave Bahnick the opportunity to hone a growing arsenal of car-customizing skills—skills he’d eventually test on a 1962 Ford pickup.

“I chopped and channeled the body. It came out nice, but getting that windshield to fit was an awful lot of hard work,” Bahnick said.

In 1986, Bahnick had a ton of experience under his belt and was looking for a new challenge.

“I found the Fairlane in Florida. It had a six-cylinder and an automatic,” he said.

Hardly what you’d call a looker, the plain-Jane coupe came complete with a cracked windshield, battered exterior, and factory interior that had been customized with at least one rattle can of green paint.

Bahnick towed the Ford back to his Ohio home and began the first round of restoration.

“That six-cylinder had to go. I didn’t even start it to see if it ran,” Bahnick said. He benched the welterweight drivetrain to make room for a beefy 400 V8 coupled to a stock Ford C-6 transmission, and then turned his attention to the car’s bodywork.

Not one to pull his punches, Bahnick picked up a body hammer and pummeled 20 years of the street-inflicted lumps and bumps from the bruised exterior. With the bodywork and powertrain in tip-top shape, Bahnick sent the Fairlane out for fresh paint and a new vinyl interior.

Bahnick drove the rejuvenated two-door until the bell sounded for round two in 1994.

“The car was still in pretty good shape but it needed to be freshened up. I basically took it apart and put it back together,” Bahnick said. “I also threw in new suspension and steering bushings and new shocks to tighten up the ride.”

Then in 2008, Bahnick decided it was time for the main event—an all out bumper-to-bumper rebuild.

“I stripped the car down to the sheetmetal,” Bahnick said. “I wanted more horsepower and I wanted to keep it street. That means it’s got to be reliable.”

Starting from the ground up, Bahnick replaced the factory front suspension with a road-hugging Rod & Custom Motorsports coil-over system and Mustang II rack-and-pinion. In the back, Monroe air shocks control the coupe’s altitude and rake, while four Wilwood disc brakes deliver a big boost in stopping power—an absolute must considering the boost in go power Bahnick had in store.

Bahnick’s power-improvement plan called for a massive 514 stroker engine, but the big block Ford was far from a perfect fit.

“I cut out the shock towers when I installed the independent front suspension and that gave me some more room for the 514,” he said. “I also had to notch the driver side valve cover to clear the brake booster.”

Taking up every available inch under the Ford’s custom fiberglass hood (and a few inches above it), the stroker is loaded with go-fast goodies and sits dressed to impress with gobs of polished-aluminum accessories (get the details in the Fast Specs below). For bulletproof reliability, Bahnick installed a rugged B&M C-6 transmission to handle all of the power generated by the 94 octane-fueled engine.

Outside, Bahnick’s impeccable bodywork is an absolute joy to behold. Every inch of the perfectly executed exterior is straight as an arrow.

“I took a lot of time getting those gaps just right. It’s those little things that make all the difference to me,” he said. The Fairlane wears a spectacular Ruby Red paint job applied by Chester Autobody and is accented with hot rod approved pinstriping provided by Guy Shively.

The car’s interior is an excellent blend of hot rod style and function. Bahnick installed a set of Monte Carlo power seats plus a full complement of power accessories, all connected to a Painless Performance wiring harness.

“On a build like this, you’re always adding circuits for the windows, locks, and what have you. The Painless harness really makes life a lot easier,” Bahnick said.

The pros at Portage Trim covered the Fairlane’s seats and interior surfaces with supple tan leather while deep red cut-pile carpet ties the color schemes together. A Vintage Air climate control system keeps Bahnick comfy while he adds over 4,000 miles to the Ford’s factory odometer every year.

Is there a round four to this story?

“Maybe,” Bahnick said. “The only thing I like better than driving this car, is working on it. I think a set of low-profile fuel injection stacks would look pretty cool.”

We should have known. Car show champions like Dick Bahnick’s 1966 Fairlane are not born, they’re built with hard work and passion, sometimes three (or more) rounds at a time.

Special thanks to: A great group of friends who were always ready to lend a hand