He will never forget it, he said.

“It didn’t make any noise when it was sitting at the line,” Francis said. “It was so small. And so fast.”

Francis was sitting at his computer one night in June 2011 reading the forums on ClassicFunnyCarBoard.com when he stumbled upon a photo of the diminutive Pocket Rocket body sitting on what he described as “a hokey chassis with four-wheeler tires.” The photo was accompanied by the message: “Look what I found.”

Francis knew what he found and quickly figured out where the photo was taken—the back of a barn in rural Middlefield, OH—and reached out to longtime friend and fellow hot rodder Mat Thrasher.

“I told him ‘I want this thing and I’m willing to spend X amount,’” he said.

Thrasher secured the Pocket Rocket and so began the latest chapter in Francis’ auto-restoration journey.

The tracks wouldn’t even light up the tree at the starting line, he said. The crowd would cry out the countdown: “Ten! Nine! Eight! Seven! Six!…”

Because there was no engine noise, Larry Nagel could hear everything while squeezed into the tiny cockpit and staring down the track.

And when the crowd yelled out “One!,” Nagel would push the pedal and all of the sudden there was a loud SHHHWOOOHHHH sound while this 5,000-horsepower hydrogen peroxide missile rocketed down the track at logic-defying speeds.

The crazy part is you just can’t appreciate the size in pictures. The Pocket Rocket is less than 10 feet long and is just 33 inches tall.

“It does 204 miles-per-hour at half throttle,” Nagel said in a (Willoughby, OH) News-Herald news story from the early 1980s. Back then, Nagel’s Pocket Rocket would travel the country and he would make exhibition passes at a variety of drag racing events. Nagel told Francis that the car had run a 6.52-second quarter mile at 247 miles-per-hour.

“This thing was seriously scary to drive,” Nagel said. “It could go 0-100 miles per hour in one second. It has 5,000 horsepower and weighs 500 pounds. It doesn’t take a rocket scientist to figure out how crazy the power-to-weight ratio is. So I figured it out and it’s frickin’ scary.”

“Once I acquired it I had a lot of sleepless nights trying to figure out how to power it,” Francis said. “He already had a supercharged 750cc Honda motor in a go cart chassis, so a motorcycle motor was out. I wanted to keep true to the spirit of the car and keep it thrust powered.  I actually rolled it into the house to put on display while I completed another project.”

[important]NOTE: This is the second time we have covered a John Francis build. Read about Francis’ ridiculously awesome 1934 HEMI-powered Chevy hot rod here.[/important]

In its heyday, the Pocket Rocket ran off hydrogen peroxide fuel before all the major U.S. drag racing sanctioning bodies outlawed the fuel for the safety of both drivers and fans.

“Having looked into different types of rocket engines, I deemed them to be too dangerous,” Francis said.

The only sensible choice was to build a jet engine, Francis decided.

“I had never built a jet before. I really had no idea how they worked,” he said.

Francis located a turbo on Ebay as a foundation for the jet engine.

“I knew that I wanted a big, big turbo,” he said. “The bigger the turbo, the more thrust I would have.”

Francis said his friend Tom Mitchell, who has helped him with some fabrication on previous projects, helped him figure out how to build the jet engine now powering the tiny Funny Car. The men custom-built a combustion chamber with round steel. And they used a 16-inch-long, 8-inch-diameter tube to create the combustion effect by drilling—with absolute precision—123 varying-sized holes in the inner four-inch cylinder.

The motor is also equipped with an afterburner. So, in addition to the thrust produced by the jet, you also inject fuel and ignite it into the rear six-inch-round stainless-steel pipe coming out the back for added thrust.

When Nagel was wowing spectators three decades ago, the Pocket Rocket was producing about 2,000 pounds of thrust.

“I’ll just have a little over 200,” Francis said. “I think doing 100 miles per hour in that thing is going to be quick enough for me and I should have the thrust to do it.”

The entire Pocket Rocket rebuild happened in about six months, he said.

The miniature Funny Car’s original chassis is on display at The Don Garlits Museum of Drag Racing in Ocala, FL, along with the Little Kings-sponsored body that Nagel sported during the latter half of his exhibition days.

“I emailed the museum asking what kind of rims were on there,” Francis said. “Garlits himself wrote back with photos and told me exactly what they were. How cool is that?”

The rear wheels of Francis’ Pocket Rocket are Welds from a midget sprint car. The front wheels are junior dragster rims surrounded by tires originally designed for motorized wheelchairs.

Don Unsner—better known as Dino, the Ace of Sprays—did all the paint and body work.

“The paint has 12 different colors, including three candy colors,” Francis said. “He used frisket paper to trace and paint all of the original items back on the car just how they were.

“It was hard distinguishing what colors to use because the paint we had was weathered for 25-plus years outside, and all the colors were different in each picture due to the lighting. I think he nailed it from what people said who knew the car back in the 1980s.”

You can see photos of how the car looked when Francis acquired it by reading through this thread at The H.A.M.B.

Francis has not yet fired the jet engine.

“Honestly, it’s a bomb. I’m not sure when I will try and fire it,” he said. “For now, I will enjoy bringing back people’s memories of the Pocket Rocket by hitting some shows and cruises.

Check out this slide show for lots of images of Francis’ latest build: 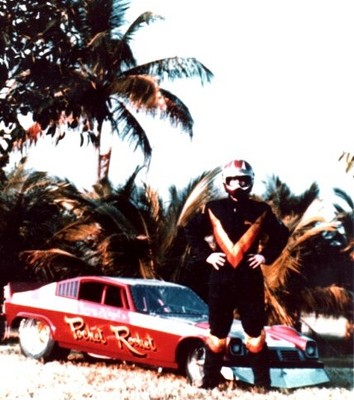 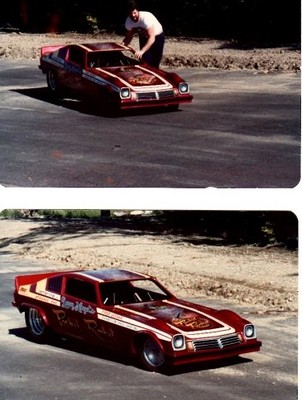 Larry Nagel built and piloted this incredible, tiny Funny Car in the early 1980s at drag racing exhibitions across the country. If you saw it, you probably remember.

The Pocket Rocket was so little, it fit in Nagel's bus' luggage compartment.

The author of this blog post, who's not the tallest guy in the world, still manages to fill out this diminutive chassis.

From the inside. We can't even begin to imagine this view right before accelerating to 100 miles-per-hour in one second.