If you really like Camaros, chances are good that you recognize this 1972 Camaro SS.

It has been in magazines, it has received gobs of awards, and it even has some famous fans. When it appeared on Summit Racing Equipment’s Facebook page back in 2011, it received over 900 “likes” within the first hour—a feat no other car on that page has surpassed. The most surprising thing about this twin-supercharged machine is that it isn’t the product of some mega-builder’s shop with a giant budget and a dedicated R&D team. Just a man and his wife and kids at home.

Rich Taylor’s older brother Steve was always working on cars, and that sparked Rich’s interest. Over the years Rich owned a 1971 AMX, a 1971 Buick GS, and a 1984 Cutlass. He got to know other local customizers, including Al Stacko (a.k.a. Al Camino) and Joe Mazzola (builder of this 1970 Plymouth Hemi ‘Cuda).

All the while, Rich quietly pined for one particular car.

“I always loved the body style of the second generation Camaros, even as a kid,” he said. “When the first-gen cars started to get hot, I decided to follow my own path.”

So, back in 2001, Rich jumped at the chance to rescue a stripped-down ’72 from a drag racer. He set to work with only one real goal: bring the car back to the street. Over the next decade, it went through a gradual transformation—some engine upgrades here, some new paint there, a bottle of nitrous here, a second bottle of nitrous there.

But the most radical mod was the one Rich had to invent from scratch.

“I had seen lots of cars with twin turbochargers, and I started thinking about twin superchargers,” Rich said.

At the time, the Camaro had a single Roots-type blower, nitrous, and fuel injection, so he knew quite a bit about boost, but this was uncharted territory. No one made a bolt-on kit for such a thing.

Rich got some help and advice from his friends, but did all of the important work at home, crafting mock-ups of all the brackets, spacers, pulleys, and the carb box from cardboard, insulation foam, and MDF.

“My wife Kim helped out a lot,” he said. “She’d use kitchen utensils and other household items to test angles and make sure things would fit under the hood. Once we got everything perfect, we took our mock-ups to Jet-Maxx, a waterjet company in Willoughby, OH, to have them scanned and then cut out of aluminum.”

The system also features twin Vortech superchargers and a 10-rib belt out of a dump truck. Once the superchargers were dialed in, the dual nitrous injection tanks became overkill.

“One of them can be used as an intercooler, and the other is actually the air tank for the custom air suspension,” he said.

The Camaro’s envelope-stretching combination of performance, ingenuity, and style has earned Rich all kinds of accolades, including an Award of Innovation from Goodguys and a spot on Camaro Performance magazine’s Top 10 of 2011. But the best reward came from one of Rich’s favorite builders: Chip Foose. At a recent Piston Power show, Chip spent a lot of time examining the Camaro, flipping through the build photographs, and talking to Rich and Kim.

In spite of all the wide-spread accolades, Rich remains a soft-spoken and humble guy, quick to point out that this dream-fulfilling vehicle is only possible thanks to his family.

“Kim and my daughters actually enjoy spending time out in the garage with me,” he said, “and they all have the small hands needed to reach into all the little spaces in the engine bay to twist in fittings and attach wires. For all her help, my oldest daughter thinks she’s earned the right to drive the car to prom. We’ll see!”

After all, Rich says he’s still not done with the car.

“Every winter we add something new to the car, and we’ve got a pretty good project this year. To make it handle better, I’d like to put in some mini tubs and wider wheels and tires, plus an overdrive transmission.”

Our suggestion: while you’re making those upgrades, better invest in some extra trophy space, Rich. 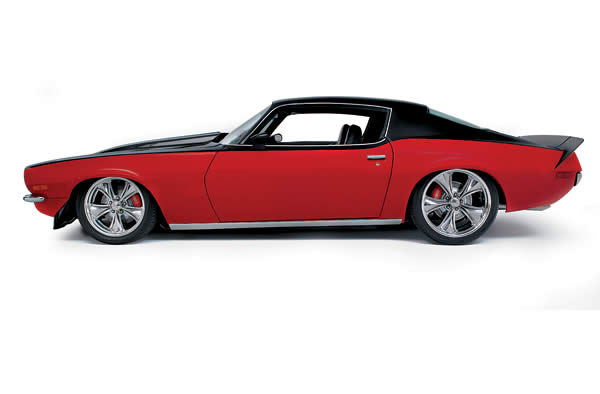 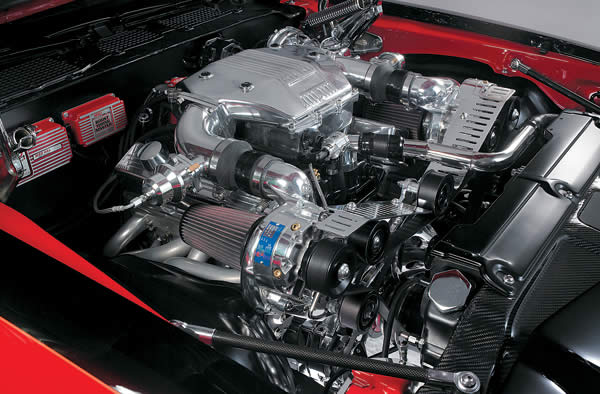 Rich has always admired the work of Chip Foose, and it’s easy to see his influence on the Camaro. Sure, the Foose Nitrous II wheels are a dead giveaway, but the car’s stance and color scheme all contribute to a clean, cohesive, and elegant design. Rocky’s Body Shop coated the Camaro with a custom mix of House of Kolor Black Cherry and PPG Torch Red, Brad Blessing brought in the subtle ghost flames and stripes, and Dave Knepper finished up the look with tangerine pinstripes.

As stunning as the exterior of the Camaro is, the real star of the show is under the hood. The stroked and overbored 350 sports a completely custom dual supercharger system, with two Vortech V-3 superchargers and a Quick Fuel Q-Series carburetor. The carb box, brackets, and pulleys are all custom fabricated, based on models developed by Rich and Kim. The engine also features an Edelbrock Victor Jr. manifold, MSD ignition components, and a Comp Cams valvetrain. “The only thing I won’t share is the custom grind specs on the Comp Cams blower camshaft,” Rich says. “Top secret stuff.”

The dual NOS bottles Rich put in the trunk no longer serve their original purposes, but they looked so intimidating back there that Rich found new uses for them. “One of them can act as the intercooler, and the other is actually the air tank for RDP Motorsport’s custom air suspension system.” The halo taillights are also homemade.

The inside of the Camaro is clean, comfortable, and understated. Stock seats have been reupholstered in two-tone black vinyl by JM Upholstery, GlowShift gauges keep Rich informed, and an Alpine stereo provides the chase scene music.

“I wanted halo headlights, but no one made them for the Camaro,” Rich says. “I used a halo conversion kit from Don Congdon at Xtreme LEDs Online to make my own. I baked the stock lights for about two hours to melt the seals, then added the halos to them.” But before resealing the bulbs, Rich wanted to make sure folks knew he had opened the bulbs and did it himself. “I painted over the blue spots with the colors and pinstriping from the body. No one makes headlights like these!”

At Super Summit in 2012, Rich and several other early birds parked near the steak sandwich stand before it opened. Later, when show officials realized the smoke of the grill was threatening to settle on some top-quality cars, they swung into action and cleared special parking spaces for the affected cars, and Rich ended up with a choice VIP parking spot.