Demon on Wheels: Bringing an Old Ford 390FE Big Block Back to Life 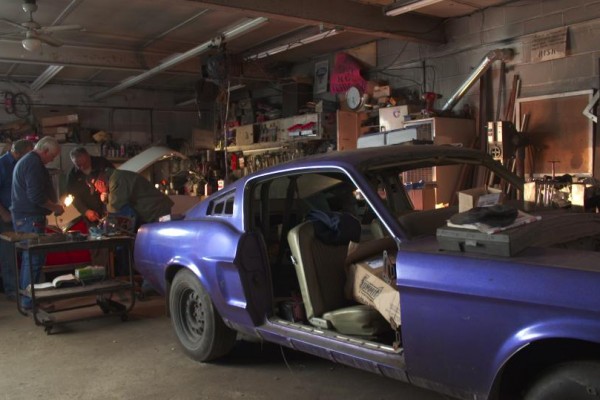 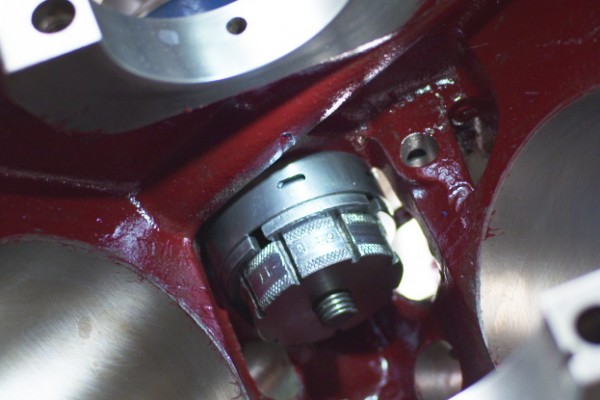 Mike Ondish and his band of merry pranksters at work on the 390 engine from The Demon, Mike’s 1968 Mustang. That’s the car on the right, a bit worse for wear after sitting for 30-plus years.

Mike slides in a Dura-Bond cam bearing into the freshly machined block. Mike had it baked to remove three decades’ worth of paint, oil, and carbon, then treated the block to a .030-inch overbore and a deck job to true up the cylinder head mating surfaces.

The crankshaft is a Scat 9000 Series cast piece with a 4.125-inch stroke. It’s part of the rotating assembly kit Mike spec’d for the 390. The kit includes pistons and rings, rods, main bearings, and rod bearings. “This rotating assembly is fully balanced,” Mike said. “This engine will be running at 6,000 rpm quite a bit. If something’s off by half an ounce, the resulting harmonics can cost horsepower and potentially damage the engine.”

The pistons included in the Scat rotating assembly are Mahle forged flat tops with a single valve relief and full-floating wrist pins. Static compression with the 72cc combustion chambers in the Edelbrock Performer RPM cylinder heads is about 10.5:1.

Mike (right) double-checks the bore diameters with a dial micrometer before fitting the piston rings to measure ring gap. The rings are file-fit with a plasma-moly top ring. Final gap for the top and secondary rings is .015 inch. Note the piston ring installation tool in the second bore from the left.

Mike shows off the shiny new COMP Cams Thumpr roller cam. The hydraulic roller cam is spec’d at 235-degree/249-degree advertised duration and .567/.551 inches of valve lift. “Back in the day we used flat tappet cams with really aggressive lift and duration figures to make any serious horsepower,” said Mike. “That ruined low-speed torque and idle quality, and at high rpm the cam would abruptly open and close the valves, literally bouncing the valves off their seats in the cylinder head. That cost power and often ruined the valve seats. A roller cam can be designed with an aggressive profile, but because it has much less valvetrain friction, we can have cams that make more high rpm power with less duration without sacrificing bottom-end power.”

Installing the roller lifters. But that’s not the important thing here—it’s the Edelbrock Performer RPM aluminum cylinder heads. Based on Ford’s 428 Cobra Jet heads, the Performer RPM heads feature 170cc intake and 124cc exhaust runners, 72cc combustion chambers with 2.09/1.60-inch stainless valves, and 1.55-inch diameter valve springs that can handle cams up to .600 inches of valve lift. Mike did a port and polish job on the intake and exhaust ports to match the ports on the intake manifold and headers.

This Shelby C7ZX dual quad intake is one of the few original parts Mike used on the new engine. The manifold is a “medium riser” with ports designed for 427/428 cylinder heads. The rear plenum is higher because the 390 tilted down at the rear when installed in the Mustang; staggering plenum height allowed the carburetors to sit level. Mike is chasing all of the holes in the manifold to clean up the threads. That insures positive bolt/stud engagement and accurate torque readings.

One 432 cubic inch FE big block, ready for its external accessories. The carburetors are Holley Model 4160 vacuum secondary units, rated at 600 cfm each. Mike milled rear carburetor’s base plate and replaced the large vacuum tube with a flush-fit pipe plug to make room for the OEM throttle cross over linkage. “I’m going to try and run the carburetors as they came out of the box, but will probably have to make some adjustments, especially on the vacuum secondary timing,” Mike said” “I like the vacuum secondary set up for anything running on the street. You have fewer problems with fuel dumping and bogging you can get with mechanical secondaries.”

A while back we brought you the story of Mike Ondish and his quest to restore the hot rod of his youth, a 1968 Mustang GT nicknamed The Demon.

Here’s a quick recap: the Mustang was infamous in the late 1960s and early ‘70s as the ride of choice for Mike and his friends, tempting heaven and raising hell street racing and rum-running through sleepy hamlets in the Catskill Mountains of New York State. Mike put The Demon away in 1975 and settled down to a quiet life as the owner of a repair and restoration shop specializing in early Fords.

Thirty-seven years after it last turned a wheel in anger, The Demon is getting a new lease on life—and the rebirth is being documented in the upcoming film Demon on Wheels.

Which brings us to this story. The Mustang came from the factory with a 390-cubic-inch FE big block. Mike’s idea for the car was to turn it into a (sort of) street-legal Trans Am racer. The 390 got a good going-over, including a Shelby dual quad intake, a pair of modified Holley carburetors, ported and polished 428 Police Interceptor heads with Iskenderian valvetrain gear, and an Isky 505 solid lifter cam. The stock pistons were replaced with Jahns popup pistons that netted a 14:1 compression ratio. Mike brewed his own fuel—a mixture of Sunoco 260 gas, alcohol, and naphthalene—to feed the high-strung beast.

Fast-forward from 1968 to today. The 390 obviously needed a rebuild as part of the Mustang’s rebirth, and Mike took the opportunity to build an engine that would make tons of power, but with far better street manners than it had back in ’68.

“We didn’t have the technology back then that we have today,” Mike said. “Old hot rodder tricks, like raising compression to very high levels, just aren’t necessary anymore. Now you can buy parts off the shelf to build an engine that makes a lot of horsepower, but can run on pump gas and actually idle and run around town.”

The Parts List
And that’s what Mike set out to do. With the help of the tech gurus at Summit Racing Equipment, he put together a parts combination that should be good for about 600 horsepower at the rear wheels. The big-ticket items include:

Attached to the 390 is a Tremec TKO 600 five-speed transmission with a Centerforce clutch and a Quick Time bellhousing. The transmission in turn is linked to a Currie 9-inch Ford rear axle assembly with a Currie gear case loaded with 3.50 gears and a Traction-Lok differential.

If you want to duplicate this drivetrain build, Summit Racing has created Demon on Wheels Mustang Combos with these parts plus fasteners, gaskets, and external accessories to make the job an easy one.

5 responses to “Demon on Wheels: Bringing an Old Ford 390FE Big Block Back to Life”