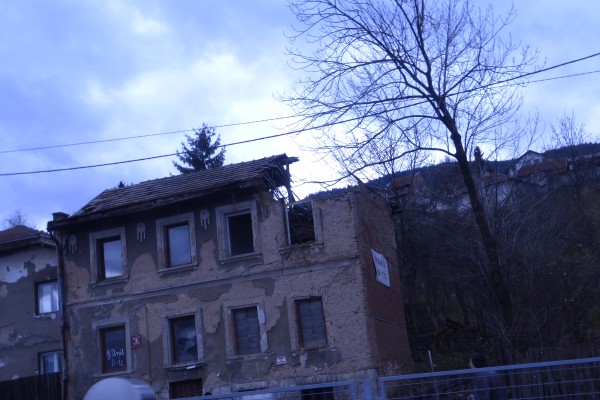 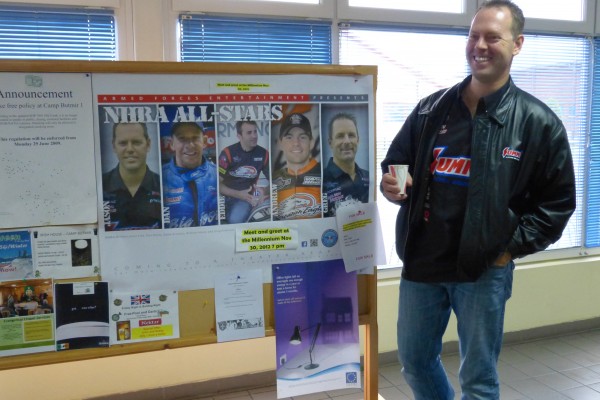 A building damaged during the 1992-96 siege of Sarajevo by the Serbs.

Jason Line gets a chuckle from being called an “NHRA All Star” on this promotional poster for the Summit Racing group’s autograph session at Camp Butmir. The display was in the lobby of the camp’s dining facility.

Bullet holes mark a building on the route from Camp Butmir to downtown Sarajevo.

This year, Summit Racing Equipment and Armed Forces Entertainment-sponsored “Operation Appreciation” has visited troops in Bosnia and Kosovo. The last stop was a meet-and-greet on Friday night at Camp Butmir, outside Sarajevo, Bosnia. Harley-Davidson Pro Stock motorcycle rider Andrew Hines took some time after the session to reflect on the week-long adventure:

First we were in Stuttgart, Germany, where there are thousands of troops. In Germany soldiers can have family with them, so they have some emotional support when they’re out in their field. Coming into Camp Bondsteel and seeing the young National Guard and the full-service members away from family and friends, you feel for them. Getting the chance to hang out with them at night and talk to them about what they are going through, it’s a totally different deal. They’re putting their lives on the line and leaving loved ones to go do what America has asked them to do.

I’m just glad we’re able to bring a smile to the troops’ faces and to let them know that we’re excited to be there and that we support them. We had a great response from everybody. I expected an eye-opening experience, and that’s what I’ve received. The work that these people put in day-in and day-out to accomplish their mission is amazing. That even extends to how things were prepared for us. They’ve done everything to a ‘T’.

I’m going home with a newfound respect for everything our military does. I’ve been fairly quiet this trip, just kind of soaking it all in. It’s more than I ever thought. These guys go through a tremendous amount of emotional pain, and they have a ton of pride in what they do, which is great to see.

My dad was an Army helicopter mechanic in Vietnam. When we went out to the flight line at Camp Bondsteel to crawl around a Blackhawk helicopter and see the guys working on them, that was an inspiring moment. I got to see what my dad did to serve his country. I had a ton of respect for him before, but I have a newfound appreciation for his service now.

I’m very honored to be part of this trip. We had a great crew here with Team Summit; this is something I will never, ever forget.