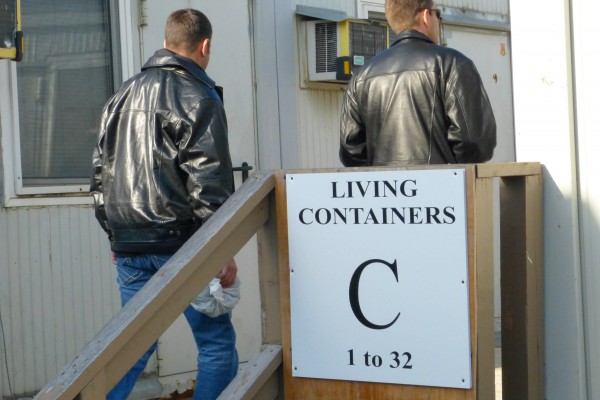 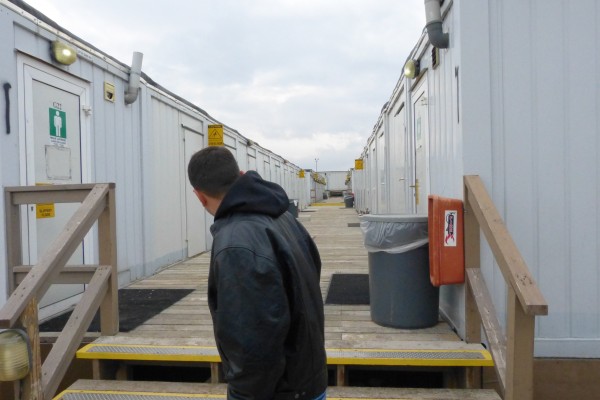 Eddie Krawiec and Andrew Hines walk past signs towards their accommodations in the “cans,” on-base visitor housing made from containers.

Eddie Krawiec looks down a row of “cans."

A view of some soldiers receiving autographs (from behind and left) Eddie Krawiec, Jason Line, Andrew Hines, Greg Anderson and Dan Runte.

Jason Line climbed up the Blackhawk’s frame to peruse the main rotor’s engine.

Eddie Krawiec checks out the controls of a Blackhawk from the co-pilot’s seat.

The Summit Racing group: Summit Pro Stock drivers Greg Anderson and Jason Line, Summit Racing/BIGFOOT Monster Truck driver Dan Runte, and Harley-Davidson Pro Stock Motorcycle riders Eddie Krawiec and Andrew Hines made the trip from Stuttgart, Germany to the outskirts of Pristina, Kosovo. The distance between the two cities is much greater than 716 air miles. Pristina is a world away from Stuttgart. Germany explodes with color; new and old buildings side by side, heavy traffic speeding by on well-paved roads; Kosovo struggles as a country still trying to rebuild from a violent war in the late ’90s which tore up buildings, streets and the populace. Rubble lines uneven roads. The vehicles are older, smaller and in various stages of decay. Repair shops – ranging from roadside stands to multi-story structures appear virtually every quarter mile. We heard the joke that they are so close together because the cars can barely go that far before needing service. “Kosovo Harleys”–motorized rototillers fitted with bucket seats–occupy these highways, along with farm tractors and Mercedes-Benz and Iveco 18-wheelers. It is dramatic.

We drove 45 minutes, past buildings in all states of construction and destruction, from the Pristina airport to Camp Bondsteel, a NATO/multi-national base (primarily U.S.) very different from what we saw in Stuttgart. At Bondsteel, Team Summit was housed in containerized barracks affectionately called “cans,” with outdoor bathrooms. Camp Bondsteel has a gym, a PX for shopping and a coffee shop which includes a scaled-down Burger King and Taco Bell as well as a pizzeria, Thai-food stand, kabob counter and full coffee bar. The 800 U.S. troops stationed here alongside some 150 or so soldiers from other nations are helping to keep peace in the turbulent Balkans. The troops have limited recreation and leisure-time activities. Going into town is not very popular.

Team Summit did venture into Pristina for a visit to Film City, NATO’s command center for the region. Some 40 U.S. troops are stationed there with troops from 30 other nations. Jason Line reflected on the program, primarily the two days in Kosovo.

Obviously Kosovo is struggling. The U.S.has an unemployment rate around eight percent; 10 or 12 percent in some places; and here it’s over 50 percent. That’s a pretty big number!  Kosovo is not as developed as any other place I’ve been to; still, it’s very interesting. Americans all get wrapped up, especially us in racing, in our own little world. When you come to a place like this, you see folks who don’t have it as good as we do, that’s for darn sure. They have real world problems to deal with, not whether they won or lost a round on the drag strip. The last thing on their minds is racing.

It’s amazing, really. I’ve had a great experience; it’s made me appreciateAmericaand how we live. It’s also increased my admiration for our troops and the troops from all countries stationed away from home. I can speak from my own experience in the Air Force stationed at a remote site. When you are deployed in a remote location, and you haven’t seen anyone from home for a long time, any piece of home is a welcome sight. So the more remote the posting, the more excited everybody is to see you, for sure. It’s good that we can make somebody happy; we can bring a little piece of home.

Team Summit visited Camp Bondsteel’s dining facility, where they ate with the soldiers and visited the full-service hospital and the Blackhawk-helicopter-maintenance operation. At each stop, they signed autographs, swapped stories with the diverse groups of men and women, many of them racing fans or automotive enthusiasts.

The Blackhawk maintenance operation was pretty cool. It’s been around for many years, but mechanically it’s up to date even if some of the equipment is not new. It’s always fun to look at tools, machinery, engines, and helicopter parts. I am certainly curious about how it works and knowing how it works might make me feel better about flying in one.

The Blackhawk maintenance group (all the troops we met were fromHawaii) was very eager to show us what they are working on, sort of the opposite of racing, at least our kind. We try to hide everything and don’t want anyone to know what we’re developing; these guys are very proud of what they do and wanted to show us how they do their jobs and explain how it affects the overall mission.

There is terrific camaraderie amongst the troops – they know their mission and stay focused on doing it. Putting myself in their shoes, I think that could be hard to do. Some of these folks are away from home for the first time. They stay amazingly focused on what they have to do; and seem genuinely happy about it.

The troops that we’ve met are certainly appreciative. Our reason for being here is to show our appreciation to them.