Is it crazy to put a lipstick-red interior in a dark blue car? Some of Ron Champe’s friends thought so, but that was before they saw his spectacular 1965 Corvette Sting Ray.

“I built this car a thousand times in my mind before I ever picked up a wrench,” Champe said. “I visualized a midnight blue body, and my buddies, well, they said a red interior would kill the car.”

It took Champe about two and a half years to work his magic and turn a well-worn vintage ’Vette into a show-stopping Sting Ray. But like his car, Champe’s story really gets going a few decades back.

“I grew up in the ’60s, and was into cars in a big way, Camaros and Firebirds mostly,” he said.

As the years went by, it seems there was always an older F-body in his driveway. Around 1993, he decided to change things up and buy his first Corvette.

More time passed and Champe started making plans for the retirement looming several years in his future. As it turns out, his wife had a plan of her own.

“She said it was time for another Corvette, and this time it ought to be a mid-year coupe,” Champe said.

Always the dutiful husband, he began prospecting for the perfect project car.

“Of course, everyone wants a ‘63 split-widow coupe, but they’re pretty scarce. To make things worse, guys used to chop out the center pillar to make their cars look newer!” Champe said.

Sifting through hundreds of cars at the annual Corvettes at Carlisle show, he finally hit pay dirt. He unearthed a substantially complete, and relatively untouched 1965 Sting Ray coupe.

“The body looked good and I was told the frame was in great shape,” he said.

He brought the car home with plenty of time to plan the build.

“I still had about two years left at my job, so I thought a lot about the design in the meantime. I wanted any changes to enhance the strong character of the car and they had to be timeless, not trendy,” Champe said. “I also decided to do most of the work myself.”

The big day finally came and Champe exchanged his business suit for some comfy garage attire. He grabbed a digital camera and began the painstaking process of dismantling and inventorying every nut, bolt, piece, and part from the Corvette.

“I think I took over a thousand digital photos while I was taking this thing apart,” he said.

He borrowed a cherry picker, and with a little help from his friends, lifted the Sting Ray’s fiberglass body off of its frame. He sent the frame out to be stripped, and got the kind of news that no car guy ever wants to hear.

“The frame was a mess. It was full of body filler and had to be rebuilt,” he said, with a shake of his head. “That was a real shocker.”

Once the frame was repaired, he filled and smoothed all of the welds and seams. He also decided to paint the frame, aftermarket suspension, and driveline components himself.

“I thought it’d be a walk in the park,” Champe said. “I pulled the trigger and man, the paint started to run. I didn’t have enough light, the frame was too low to the ground, and I even had the wrong side up. I learned the hard way that the bottom of the frame is the part you actually see.”

With the rookie mistakes corrected, he turned his attention to the mid-year’s 396 big block.

“When you buy a car like this, the motor is usually trashed, so I let a buddy haul it away,” he said.

A few days later, his friend returned with some pleasant news and the big block in tow.

“I told him that I didn’t want that boat anchor and he told me, the engine was virtually new! That sure took some of the sting out of the whole frame debacle,” he said.

Although the cylinder heads had to be reworked, the .030-inch over engine came with Crane pistons and rods, plus a new COMP Cams Magnum camshaft. To complement an eye-popping assortment of polished billet engine accessories, Champe gave the block a PPG Argent Silver base coat followed with clear.

Before reassembling the Sting Ray, Champe shaved the door handles, removed all of the exterior emblems and trim, and repaired some fiberglass damage.

“You can cure fiberglass with a heat lamp or direct sunlight, so I had the car’s body parts scattered all over my yard,” he said. “I’m glad my neighbors didn’t get upset!”

He then blocked the body to perfection and sent the entire shooting match out for paint and interior work. The mid-year made its way back home wearing a breathtaking Twilight Blue Pearl paint job, expertly applied by Ken Zikelli of Zeke’s Street Machines. At Champe’s request, Zikelli also added a ghosted rally stripe—a modern tribute to the Vette’s vintage sports car roots. A set of Intro Radicalli aluminum wheels, a custom billet grille, and polished side exhaust covers add some star-like shine to the deep twilight background.

Open a door, slip inside and your senses are immediately kissed by the Corvette’s lush, lipstick-red leather interior. The two-seat cabin also sports a tasteful collection of polished accents including a Billet Specialties Chicayne steering wheel, Flaming River steering column, and a custom billet dash that carries a collection of Auto Meter Ultra-Lite gauges.

“I wanted to take this build to the limit of my ability and I’m really happy with the way the car turned out,” Champe said.

We couldn’t agree more. In fact, you’d have to be crazy not to love a Corvette this cool. 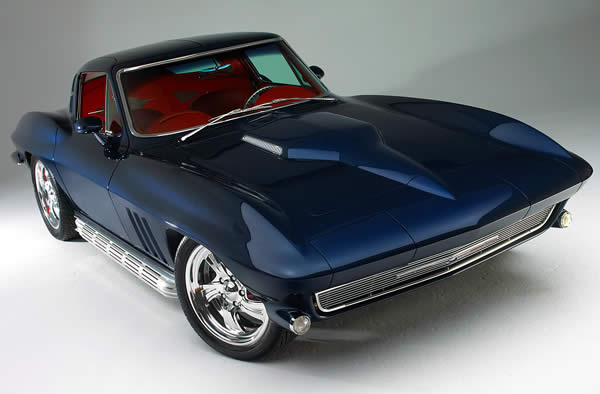 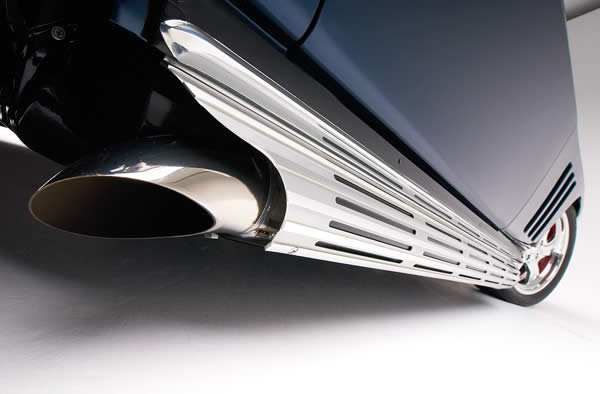 Ron jettisoned the Corvette’s front bumper, shaved the door handles, and blocked the body until the fiberglass was as smooth as…well, glass! The result is a modern take on a classic design and it’s sure to look killer for years to come.

The Sting Ray’s gleaming side exhaust pipes look cool, sound cool, and they even help keep the car’s interior cooler, too! “Running the exhaust outside of the car keeps an awful lot of heat from coming through the floor,” explains Ron with a sly smile.

A peek under the ’65’s fiberglass hood reveals an engine bay that’s neat as a pin and chock full of polished billet components. Ron routed the big block’s wiring strategically out of view and even ran the alternator and AC wiring through stainless steel tubing.

Room for two with one heck of a view! Red leather and plenty of billet aluminum play in harmony with the mid-year’s Twilight Blue Pearl exterior. What better way to log some quality seat time!

The coupe has a trick flip-up rear floor that conceals the relocated Optima battery and wiring harness fuse block. Ron also hid a set of remote jumper terminals behind the front wheel. “The car doesn’t have any door handles, and I need a way to power the door poppers in case the battery goes dead,” says Ron.

This mid-year has a ton of attitude and it shows! Ron’s amusing commentary is a subtle touch that’s easy to overlook.

From any angle this car is a winner. It’s hard to believe this was Ron’s first real shot at hot rod building—we can’t wait to see what he has planned for round two!

Special thanks to: Ken Zikelli for the over-the-top paintwork and my lovely wife Donna, for putting up with two and a half years of dust, dirt, grease, and fumes