Editor’s Note: This story originally appeared on SummitRacing.com on 12/22/2011. 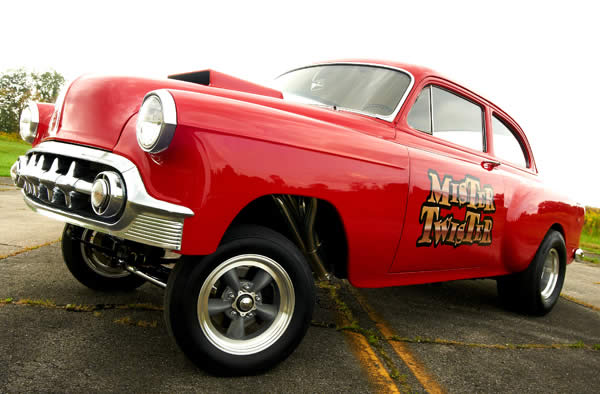 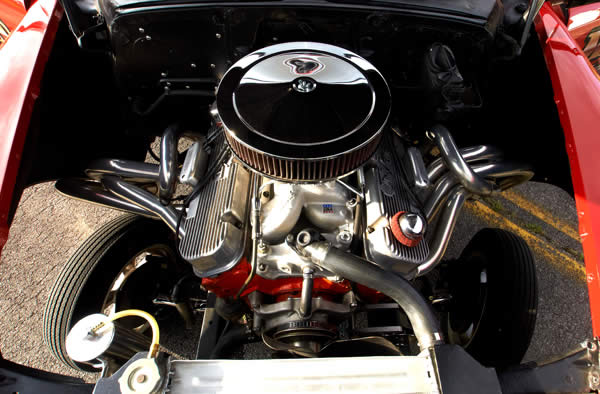 Scott Benson started this '53 Chevy straight-axle when he was in high school. Eight years, three engines, a couple revisions, and several trades later, Scott is the proud owner of his own Mister Twister.

The 454 lurking under that custom cowl hood started its life in Scott’s first hotrod—a 1948 Pontiac that he bought when he was 12 and had road-ready when he turned old enough to drive. After it spun a bearing, Scott seized the opportunity to build it up and transplant it into the '53 Chevy.

Scott kept Mister Twister’s dash sleek and clean with a radio delete and a combo of original and aftermarket gauges.

Sullivan’s Upholstery in New London, OH, crafted the new interior—a clean black and white scheme that was inspired by a '55 Chevy Delray.

A couple of Don Benson’s close friends drove straight-axle hotrods for decades. When his son, Scott, caught the bug and started building one, Don knew he had to get on board too. The Fugitive is among hundreds of cars that Don’s built, but it’s certainly one of his favorites.

From its stance to the blue window tint, single stage Maaco paint job, and freehand lettering, the Fairlane looks like it rolled off the dragstrip decades ago.

So why does the hood say 427 cu. in.? “That’s what was in the car when I had the hood painted,” Don said. At the time of this story the Fairlane was powered by a Chevy 283 that Don acquired in a trade from Scott.

The Fugitive’s cockpit is all business with stock seats covered in black vinyl, a mix of stock and aftermarket gauges, and aluminum door panels. Don finished off the Hurst stick with his own custom shifter boot.

The door says it all. When asked about it, Don smiles a sly smile and tells a story about a police officer who saw it in a parking lot and liked it so much he had to get a picture of it to share with his friends.

Don’s quick to credit his friends and family for the work on the Fairlane. This is just one of the many thanks that he had “J-Bird” Jeremy Lockard letter.

When Don brought home the rolling chassis, his vision was to turn the Fairlane into a tribute to the AFX/Gasser era and legend in local racing, Otie’s Automotive of Akron, OH. “I wanted to make it just like it would have been back then,” Don said. “I wanted to capture that look and feel.”

Spend a little time with Scott and Don and it’s easy to see that the apple didn’t fall far from the tree. They’re having a great time cruising the streets and hitting as many shows as they can with fellow Gassers Bonecrusher, Lil’ Pepe, and more.

When most kids were playing in sandboxes, Scott Benson was playing in an old truck cab that his dad, Don, brought home and put in the backyard for him.

When most kids were trading sandwiches and toys, Scott was trading and selling real vehicles and various parts. One of those trades involved that truck cab that Scott spent so many hours playing in. “Dad told me to put that money aside, it’s my hot rod money,” Scott said. “He’d always tell me to save some hot rod money.”

And, when most kids were playing with die-casts and toy trucks, Scott was in the garage with Don and his buddies, watching, helping, and learning.

Talk to Don Benson and it’s easy to see that the apple didn’t fall far from the staging tree. In the ’60s and ’70s, Don was a fixture of the local car scene. When he wasn’t piloting his friends’ racecars at Ohio’s Drag City, Norwalk, Thompson Raceway, and other tracks across Ohio, he was in his own—a ’67 Plymouth GTX named Mister Twister that dished out 10.90s on the quarter-mile.

“That car would twist so hard when I launched,” Don said about Twister’s name. “It was a lot of fun.” In fact, that car was so much fun, Don once “blew his own doors off” during a run at Norwalk Raceway…but that’s a story for another time.

And, just as he taught Scott, when Don wasn’t behind the wheel, he was selling, trading, and stashing away “hot rod money.” The colorful hotrodder has had more cars than he can remember off the top of his head. So many, that on a few occasions he actually acquired a couple of his old vehicles without realizing it until he dug into them. The 1963 Fairlane found its way to Don through a trade that started with a Greyhound bus for a ’49 Olds. Don traded that Olds for the Fairlane, which was in rough shape.

“It was an old racecar and needed a lot of work,” Don saids. “But I knew we could do it.”

Don and his friends did what they do best—they pooled their talent, made some trades, and turned the rolling chassis into The Fugitive—a straight-axle tribute to the AFX/Gasser era and legend in local racing, Otie’s Automotive of Akron, OH.

From the stacks sitting atop six Holley 2-barrel carbs to the custom headers sticking out behind the one-piece tilt front end, this Fairlane is big on attitude.

“I wanted it to look like it would have back in the day,” Don said. “I’m really lucky to have so many talented friends. I couldn’t have done it without them. Scott built that engine, and Dave Farwell, the son of one of my hotrodding buddies, fabbed those headers up from scratch. Those boys are so talented. It’s neat to see how they’ve grown up and what they can do. Now they’re teaching us some new tricks.”

The Fugitive, with its single-stage 1963 Factory Ford White Maaco paint job and lettering by “J-Bird” Jeremy Lockard, was inspired by a couple of straight-axles owned by friends John Dennison (R.I.P.) and Jack Jenkins.

“One day Jack took Scott for a ride in his ’64 Nova and Scott was hooked,” Don said. “He started to build his own when he was in high school. When he got it on the road, I decided I needed one, too.”

Scott was still driving his first hotrod, a 1948 Pontiac with a 454 that he traded some hot rod money for back in junior high, when he found the perfect car to turn into a Gasser.

“A friend’s cousin had this 1953 Chevy and he wanted to make a trade with Dad. It was about three doors down from where Dad bought his GTX years ago, which was pretty cool,” Scott said. Don passed on the trade, so Scott dipped into the hot rod money again and brought the car home. Without an engine, transmission, glass, or interior, the ’53 was a blank canvas, literally. It was also the perfect project for Scott, who was ready to take on the entire project from the ground up. He made a front axle, built a Muncie 4-speed transmission, and dropped a 350 into the car (until it blew and he built a 283 to replace it). With some help from friend Dave Farwell, Scott rolled and radiused the wheelwells and the car was shot in gray primer.

“I drove it around in primer for a while,” Scott said. “Then one night at a party, ’J-Bird’ Jeremy Lockard was lettering cars. He asked if I wanted something, so I told him to make it Mister Twister, as a tribute to Dad and his old GTX.”

“When he came home with that car lettered…that was something else,” Don said. “It was amazing to see him build this car, he has so much talent. He inspired me to get going on my Fairlane so we could go cruising together.”

Shortly after the ’53 became Mister Twister, Scott took it up a notch with a new front end, a 4″ drop tube axle with parallel leaf springs, and a cross steering upgrade. He also worked out a trade with Don—the 283 went into The Fugitive and Scott scored the parts he needed to rebuild the 454 that had been in his ’48 Pontiac. With that freshly built 454, Twister was back on the road and badder than ever, gray primer and all.

That primer lasted until a small quarter-panel-crunching accident left Twister in need of some bodywork, and Scott turned to friend and fellow car guy Jason Bonecutter.

Jason topped Twister with House of Kolor Kosmos Red and re-lettered the car with a bolder design in gold metallic.

“John and Jack were kind of the pioneers of our group with their straight-axles,” Scott said. “They had those cars since the ’60s and I learned so much from them and Dad and all of his friends that I was able to build the Chevy into what it is today. It’s pretty cool to get out there and cruise around with them now. We have a lot of fun.”

Since the completion of The Fugitive and Mister Twister, Don and Scott have logged many miles, cruising the area and hitting as many shows as possible each summer—and when they arrive, you know it. You can hear ’em coming a mile away. When you stop to see what’s causing the commotion, you’re not disappointed as Mister Twister, The Fugitive, Bonecrusher, Lil’ Pepe, and a handful of other Gassers show up to get the party started.

What happened to the original Mister Twister, you ask? “I sold it to a guy who has it in Arizona right now,” Don said. “I know where it is, and I could probably buy it back.”

Will Don trade the Fairlane for it?

“No,” Don’s quick to say. “I’m having a lot of fun in this car with Scott and the rest of the group, it’s my favorite.”

Special Thanks
To everyone who has ever helped. It’s nice to have great friends in the hotrod community that are always willing to lend a hand: Dad, Mom, Jason Bonecutter, Tim Farwell, Dave Farwell, Jack Jenkins, Joe Balint, Ryan Whinery, Steve Mccune, Grandpa (Earl Bormuth), Paul Kinzel of KZ Automotive, the late Tom Tennant and John Dennison for their advice and inspiration, and to my high school shop teacher and fellow drag racer, Terry Colescott, who inspired and taught me many things.

Special Thanks
To my wife, Cheryl; John Dennison (R.I.P.) and Jack Jenkins for their inspiration; Dave and Tim Farwell for their help in getting this car on the road; “J-bird” Jeremy Lockard for the lettering; Scott Benson for the engine assembly; Jim Howe for having me shoe his pro-gas altered race car “Deacon Blues,” and Ross Hass for having me shoe his “American Express” Camaro that won Racers Day at Quaker City; and gone but not forgotten, Top-End Tommy Tennant, a racing friend of many years.