TALLMADGE, OH—First, the retired U.S. Marine picks up the phone and dials the 10-digit number he’s been calling for more than two decades.

Then he chooses Option 4, and dials 6-5-3-2. When the familiar Summit Racing Equipment salesman and tech advisor picks up, the conversation always starts the same: “Hey Vito! It’s Don from New York.”

And so it goes—two or three times a month, as has been happening from almost the very start of Vito’s sales career at the performance aftermarket automotive parts provider.

We at OnAllCylinders can’t really be sure how long that has actually been. If you listen to Vito tell it, it’s only been five or six years.

“But it feels like 20,” said Donald Giglio, a long-time Summit Racing customer who lives in Saratoga Springs, NY.

Giglio put a new engine in his 1950 Dodge B2B pickup in 1999, and if you want to believe the truck owner, Vito was there from the beginning of that project.

Regardless, the two men have developed a bond over the years of working together. Giglio will call up Vito just to wish him a Merry Christmas, and Vito says he has a personal stake in Giglio’s many and frequent truck upgrades.

After years of working together and only knowing each other by phone, the two met for the first time just a week before Super Summit at a car show in Parma, OH, where Vito took his family to finally meet Giglio and see the rare—and unique—Dodge truck in person.

Then, just a week later, they met up again at Super Summit where we had the pleasure of meeting both guys—as well as Giglio’s buddy Jack Angelvich who himself has 12 years of wrenching on, and fabricating components on the beautiful truck.

“I deal with nobody but Vito,” Giglio said, which isn’t exactly true because he admitted to having good experiences with other Summit Racing customer service reps. But his point stands—Vito is the man.

Vito reiterated that he has a personal stake in his customer’s builds, and particularly in one like Giglio’s who he’s developed a relationship with over the years.

“You gotta think of it that way,” Vito said. “I treat it like it’s my own build.”

The boys have done a ton to the truck. It’s been green, black, and now it’s blue.

The truck sports a 1974 Barracuda 318 engine that makes 330 horsepower at the flywheel, according to the last dyno test.

Giglio’s upgrades are almost too many to list here, though the truck features a number of custom modifications totally unique to this ’50 Dodge, including pewter screen door handles for the truck’s door and hood handles.

The rear bumper is from a 1972 Volkswagen Beetle that Giglio picked up for $20, and features tongue-and-groove wood he pulled from one of the bathrooms in his house.

His side-view mirrors were pulled off an old Harley-Davidson motorcycle.

Giglio bought the truck for $200 off of a New Hampshire farm 28 years ago. He and Angelvich—and by phone, Vito—are constantly tinkering with it as Giglio isn’t shy about putting miles on his labor of love.

She apparently said: “It’s nice, but either it has to go, or you have to go.”

Giglio smiled and gestured toward his truck.

At Super Summit, standing together for just the second time ever, Giglio and Vito carried on like the old friends they feel they are.

When asked what he would do if Vito ever left the company, or retired, Giglio assured us that wouldn’t be possible.

“He better not go nowhere!” Giglio said. Then he thought about it a second longer before concluding: “No. I got stock in that guy. He ain’t going nowhere. It would be like losing a family member.”

We like him too, Don. So let’s all hope that doesn’t happen.

Check out photos of Giglio’s unique Dodge truck in this slideshow gallery: 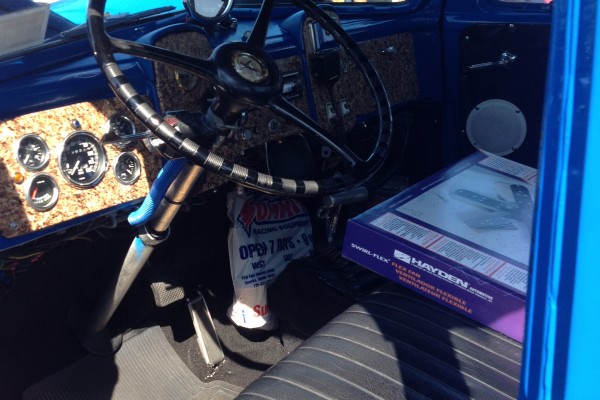 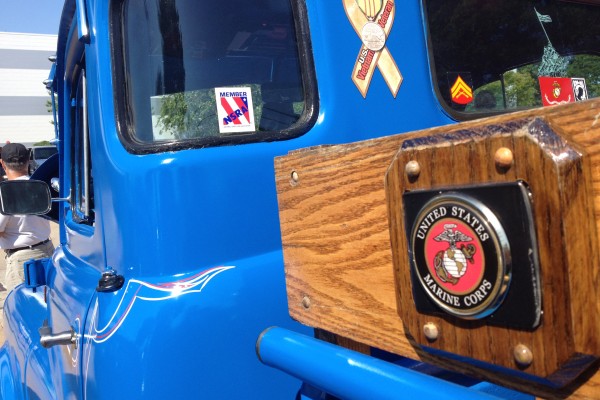 Don Giglio, left, poses next to his 1950 Dodge pickup with friend Jack Angelvich