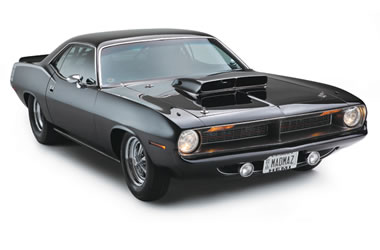 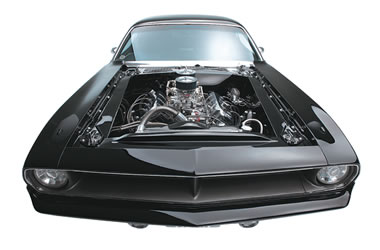 “Life got in the way of drag racing, and I wound up parking the car in the garage where it served mostly as a shelf. I got plenty of offers on it over the years, but I thought it fit pretty well in there, so that’s where it stayed.”

So sat Joe Mazzola’s 1970 ’Cuda: a tire-shredding terror on the street and strip sentenced to 20 years hard time propping up paint cans and garden tools. But after two decades, the imprisoned Mopar would be turned loose with a slick new look, a monster Hemi under the hood, and a cutting-edge partner in crime set to follow in its 18-inch tread marks. Back in 1973, Joe emptied his savings account and netted the Mopar as a bank repo for a now-unheard-of $1,400, complete with a black vinyl roof, four bald tires, and a respectable 383 under the Sublime Green hood. As an added benefit, it didn’t hurt his chances with his then-girlfriend, Pam.

“I was actually the one who told him to get it. It was my dream car,” Pam said. “And it was way cooler than that old Bel Air wagon he was driving.”

Evidently Joe’s investment paid off, as the pair hopped in the Mopar—bald tires and all—headed to Virginia and got married that same year. However, after a few years of “spirited” driving, his relationship with the ’Cuda wasn’t quite as blissful.

“Within three years, I had about 10 points on my license thanks to that car,” Joe said. “At that point I decided that if I was going to keep it, I’d have to take it racing.” To keep up with the big fish at the strip, Joe punched out the block .030 inches, added a set of Ramcharger heads, and topped it all off with a free-breathing 750 cfm Holley. Earning him the nickname “Mad Maz” at the strip, his fully built, 110-octane guzzling drag racer darted down the quarter-mile, reeling in 11-second time slips until a frame-twisting final run sent the Mopar into early retirement.

“I didn’t even notice at first,” Joe said. “I went to get in the car and I saw this huge crease down the rear quarter panel. I thought it’d been backed into, so I asked around, and someone suggested that I’d tweaked the frame on my last pass. Sure enough, it was completely bent.”

The ’Cuda spent the rest of the season up on blocks, letting gravity undo what two sticky tires and several hundred foot-pounds of torque accomplished in an instant. And that’s where the car sat for the next 20 years.

In the meantime, Joe and Pam raised two children and even campaigned a 1971 ’Vette around the local show circuit, but like any E-body enthusiast will tell you, for Joe it was Mopar or no car. “The Corvette was great, but eventually I thought to myself, ‘this thing isn’t half the car that I have sitting in the garage,” Joe said.

After 20 years of hibernation, Joe picked up right where he left off, giving the race-prepped ’Cuda the full Pro Street treatment. With the help of Carson “Skippy” Stone of Skippy Did It Race Cars in Ravenna, OH, the rear seats came out and a four-link suspension with a custom RideTech setup went in. To get a grip on that metal bending 383, they tubbed the rear wheelwells to make space for the biggest set of Cragars and Mickey Thompsons they could find.

But even with the extra tread and slick suspension, the high-strung 383 proved too much motor for casual cruising. “Once I started taking it to shows, it was pretty obvious that I had to either tear apart the 383 and make it easier for driving on the street, or completely remove the motor and find something else,” Joe said. “…And besides, I wanted a Hemi in there!”

With the help of his fellow cruisers, Joe cast out a line and pulled in a beauty. This Hemi—an impressive hunk of iron in its own right—came loaded to the gills with top
spec racing goodies like a Valesco billet stroker crank, Wiseco 10.5:1 pistons, and an aggressive Crane hydraulic roller cam. It was a 512 CID behemoth!

Friend and engine builder Rusty Vaughn handled the transplant, and then it was back to Skippy, where he and Joe chromed every component they could get their hands on. Finally, it was off to Lintz Collision for a shot of gloss black and that signature silver stripe.

“That’s about the time everyone started freaking out when we took it to shows,” Pam said. “You never get tired of all the thumbs up—everyone loves a ’Cuda!” For most car buffs, this is where the story ends, but not for Joe and Pam. Refusing to be outdone by her husband, Pam took delivery of her own Mopar musclecar in early 2009, and the family resemblance is undeniable.

Just like its older brother, Pam’s Brilliant Black Challenger SRT8 packs a tire-melting Hemi under the hood. But this time it’s a modern, fuel-injected motor. The contemporary Elephant engine sports a long list of performance upgrades courtesy of “Dyno” Steve Leerentveld at RDP Motorsport in Perry, OH, including a custom RDP cold air induction and 3-inch exhaust setup, BilletTech fuel rails, and a DiabloSport Predator flash tune, squeezing an estimated 500 horsepower out of its 6.1 liters. But the mods for this modern Mopar don’t stop there. “I really wanted people to say ‘wow’ when I opened up the hood,” Pam said. To complement her Challenger’s dash, Pam added a heavy dose of flash with a show stopping combination of chrome powdercoat and polished stainless steel accents, plus a specially designed fiberglass firewall fascia to clean up the engine compartment. A silver side stripe is the last bit of DNA that unites Joe and Pam’s twin Mopars.

Which is best? Well that all depends on who you ask. “The Challenger is amazing going down the road. It has all the luxury of a modern car with more than enough muscle to keep things fun,” Pam said. “Yeah, but I don’t like the ’Cuda because it’s comfortable to drive,” Joe retorted. “I drive it for the reaction I get!”