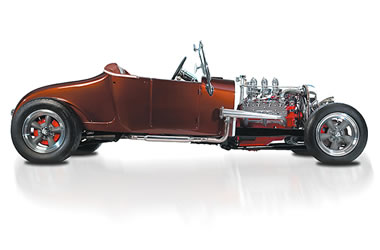 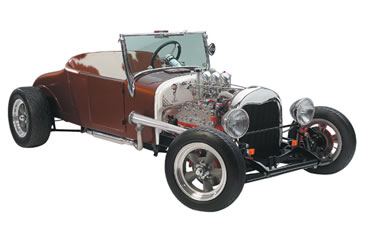 This radical street rod actually started life as three! While the body comes from a 1927 Ford, Rich welded up the frames from a ’30 and a ’32 to create the boxed foundation underneath, complete with a 7" stretch just for good measure. Classic American Racing Torq-Thursts shod in Mickey Thompson rubber keep the corners authentically old school.

Rich’s roadster might have a bit more fur than the average hotrod, but don’t mistake it for a rat. “If someone calls it a rat rod, it's probably because they’ve got a lot to learn about old hotrods,” he says. “I built this one the same way the guys were doing it back when I was a teenager. Of course, at the time I didn’t know it’d take two-thirds of my life to get mine!”

By keeping the Ford’s suspension remarkably similar to how it rolled off the factory floor more than 80 years ago, Rich needed only to lose a couple leaves from the springs up front and add a set of coil-overs to the rear to achieve a perfect 4" drop. It’s hotrodding 101!

This trunk’s full of more than just fur—Rich hid a custom fuel cell back there to feed the flathead up front. South of the trunk lid, you can spot hand-applied artwork by local pinstriping legend “Hollywood” Henderson. And just like an old barn find, you’ll see those cool cobwebs painted across the dashboard and in the engine compartment, too!

When it came to getting his street rod down the road, Rich’s choice of engines was easy. “Life’s too short to drive a Chevy,” he jokes. “I don’t like seeing a big Chevy or Mopar under the hood of a Ford. I’ll always be a flathead guy. I just love the noise they make and I love working on them.”

Leather interior? Sort of. Rich’s incredible upholstery comes compliments of four genuine Brazilian cowhides. Just stay out of his way on the streets, otherwise you’re gonna get the horn. Grab the lever tucked under the bench seat and this street rod lets out a thunderous “Mooooooooooo!” And that’s no bull.

This story originally ran in the Summit Racing catalog and first appeared on SummitRacing.com on 10/8/2011.

You know what they say: if you want something done right, then you have to do it yourself. And if you’re Rich Schneider, that goes double when you’re talking about street rods.

Running his own body shop in Bridgeville, PA, Rich has been in the business of shrinking, stretching, and straightening sheetmetal for over 40 years. But his passion for shaping steel goes well beyond nine to five. In fact, when the daily grind at Foremost Auto has ground to a halt, that’s when Rich turns his talents toward his own rides.

From powerful Porsches to a flame-throwing ’53 Ford, Rich’s revolving collection (spanning more than he can count over his lifetime) seems to know no bounds, but only one has scored a permanent spot in his stable: this ’27 Ford roadster.

With an arrow-straight body, a fully built flathead, and loads of custom touches between the bumpers (including a killer cowhide interior), this copper-brown beauty could have only come from Rich’s garage, and it’s a prime example of a well-done street rod.

However, for a tried-and-true sheetmetal man like Rich, his first foray into bucket building got off to a flimsy start: plastic. Two years before this build began in earnest, Rich was the reluctant owner of a pre-fabbed fiberglass deuce.

“I never disliked a car more than that one,” Rich said. “Sure, I was a Corvette-aholic for the longest time, but I just hated working with that fiberglass. The doors, the panels; nothing ever lined up right. Plus, the more I worked on it, the more it made me itch!”

Still eager to scratch that roadster itch, Rich ditched the kit and turned to friend and fellow metal head, Karl Swoger to get his hands on some real American steel. As the owner of a local frame shop and collector of all things street rod, Karl had amassed mountains of greasy gold, which served as Rich’s private supply yard for the build.

“Karl is a real accumulator of…things,” Rich said. “Over the years he’s managed to fill his building to the rafters with everything you’d need to build a car like this—it’s like street rod heaven in there.”

Rich returned to his own garage with not one, but two spotless frames, an equally clean and complete ’27 body, the biggest flathead in the land, and an advisor that worked for deli meat.

“I could get Karl to leave his shop for the price of a Reuben sandwich. My wife would bring them home every Wednesday,” Rich said. “Karl would come over, have a sandwich, and tell me everything I did wrong on the car.”

The first order of business was joining those two frames together to form a fully boxed frame complete with a seven-inch stretch. Then, to mount up the body—which he first channeled four inches—Rich sourced everything he needed from his own barn. Literally.

“I was reskinning my barn at the same time I was working on the car, and had plenty of red oak slats lying around.” Rich said. “That’s what I had on hand, so that’s what I  used for the body mounts. It’s actually pretty close to the same way they came from the factory.”

With the body and frame together, Rich added a pair of low-slung coil-overs to the Ford 8-inch rear and pulled enough leaves out of the stock front suspension to achieve a four-inch drop—enough to look good without laying frame on those Pittsburgh potholes.

Saddle up behind the wheel and you’ll see why this roadster stands out from the herd. Maybe the corned beef in all of those Reubens finally got to him, but Rich wasn’t about to settle for any run-of-the-mill leather interior; his ideal roadster was wrapped in bona fide cowhide.

“The problem with all of those kit cars is that people are churning them out hundreds at a time, and they’re all the same,” Rich said. “This was my opportunity to do something different.”

And “different” doesn’t begin to describe this interior. Stitched up by John Carey Auto Trim, the roadster’s cow-clad duds feature genuine Brazilian cowhide covering the seats, floor, door panels, and even the trunk. What’s so special about Brazilian cows? Rich says the ranchers there don’t use barbed wire fences, which keeps the hides free from nasty perforations and snags.

To bring all that Wild West influence back to Steeler country, Rich adorned the switchgear with some frosty, local flavor: bottle caps from two of Pennsylvania’s brews top off the choke and headlight pulls, and the Fort Pitt Brewery tap is a refreshing change from your everyday shift knob.

Tapping into his classic street rodder sensibilities, Rich’s choice of engines was obvious: the biggest flathead he could find! Once turning the tires of a ’53 Mercury, the 255 V8 in Rich’s roadster was bored .030-inch over and shoehorned in complete with a laundry list of street rod-approved mods, including an Offenhauser intake manifold and heads, an Isky cam, a trio of authentic Stromberg 97 carbs, and a set of Summit weld-up headers complete with dumps.

It all adds up to an undeniable classic infused with Rich’s unique brand of street rod style. And sure, it took a couple attempts to perfect the recipe, but he’s over the moon with the results. “I’ve bought and sold a lot of cars over the years, but I have the most personal connection to this one.” he says, “I’ll never let it go.”